They're a threat to the state’s ground-nesting birds and tortoises. Needless to say, these reptiles are not being met with Southern hospitality. 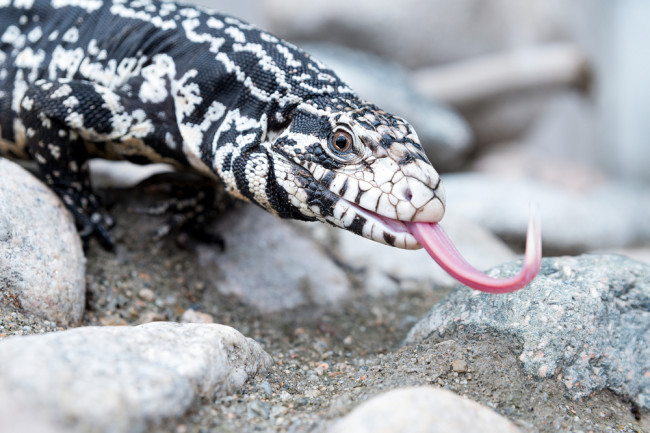 What’s black, white and showing up in two Georgia counties?

If you guessed Argentine black and white tegu lizards, you’re probably either a herpetologist or a resident of the Peach State who has helped wildlife officials track and trap these invasive reptiles.

Argentine tegus, which can reach lengths of up to 4 feet when fully grown, are not native to Georgia. As their name suggests, they’re originally from South America, found in Argentina, Brazil, Paraguay and Uruguay. Like many other invasive species — reptiles in particular — they have ended up far from home thanks to people wanting to keep them as pets. Then they’re either accidentally or intentionally released into the wild.

The tegu’s presence in Georgia is a significant threat to the state’s wildlife, says Lance McBrayer, a herpetologist and professor of biology at Georgia Southern University who’s trying to stop the lizard. “They are very efficient predators of our native fauna that don’t recognize them as predators,” he says.

Tegus are happy to eat just about anything they come across, but their favorite food is eggs, says McBrayer. That’s bad news for native ground-nesting birds like quails, or the vulnerable gopher tortoise, which the state of Georgia and nonprofits have spent significant time and money to protect. But the tegu’s appetite for eggs also makes it easier to trap.

Run-ins with tegus have primarily clustered in Georgia’s Tattnall and Toombs counties, but there are reports of appearances elsewhere in the state. Six have been trapped in 2020 in those counties. Last year, seven were captured, and others were either killed by residents or became roadkill.

The Georgia Department of Natural Resources and nonprofits have encouraged residents to report tegu sightings to assist with trapping efforts. The lizards’ distinctive appearance makes them difficult to miss, with their blunt heads and speckled black-and-white bands along their backs. So far, most captured have been around 2 feet long, though they can grow to double that size. 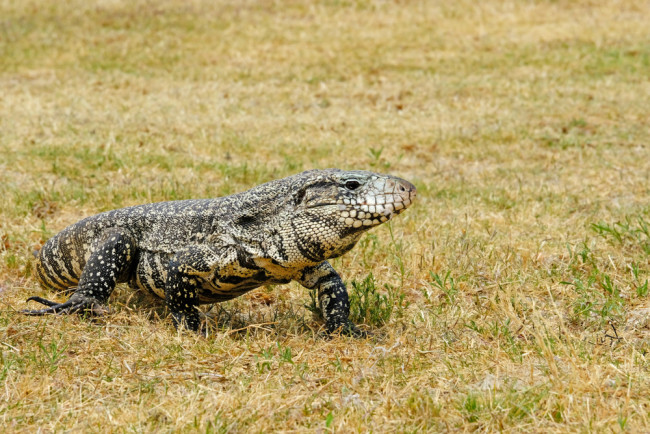 Although the number of tegu lizards trapped might not seem like a lot, McBrayer says it’s enough to suggest that they’re breeding in the wild. “We suspect that they are breeding, but we have not captured a juvenile,” he says. “So, we can’t say with absolute certainty that there are baby tegus running around.” Genetic samples taken from captured tegus may eventually reveal the answer, but as of yet there aren’t enough samples from different lizards to determine how they might be related.

Tegus, for their part, are right at home in the American Southeast. “Their native range is basically at the same latitude that we are in Georgia and the southeastern U.S.,” says McBrayer. “So, they will do just fine overwintering here in their burrows.” And indeed, populations of Argentine tegus in parts of Florida have persisted for years. There, the hope of eradication is long gone. Wildlife officials who trap them simply hope to contain their spread and limit their damage on Florida’s native wildlife.

Eradication of an invasive species is only possible within a narrow time window after their initial introduction, according to Amy Yackel Adams, an invasive reptiles expert with the U.S. Geological Survey who has assisted the efforts in Georgia. And eradication isn’t easy. Yackel Adams can only recall a single success story involving invasive reptiles, a project she worked on in Maui to eradicate an invasive chameleon species. But she thinks that, in this case, it’s still possible to stop the tegu’s spread. “We’re at that early invasion,” she says. “It’s the best time to deal with it.”

Both Yackel Adams and McBrayer cautioned that even if no tegus are caught next year, it doesn’t mean that they’re gone for good. “The hope would be eradication, but in all honesty, eradication is very, very difficult because you’re searching for an unknown end point,” McBrayer says. “You have no idea when all of them would be gone — so when do you stop and call it?”

Trapping efforts will resume in the spring because these lizards hole up in burrows during the colder winter months. But even if Georgia’s efforts succeed in finding and removing all the lizards, tegus will continue to be a problem across the South. Recently, several were spotted in South Carolina. “This is not just going to be a Georgia problem,” says Yackel Adams. She hopes what they learn about tracking and containing these lizards will help others the next time tegus are spotted where they don’t belong.

Planet EarthJust How Intelligent Are Dolphins?
Recommendations From Our Store