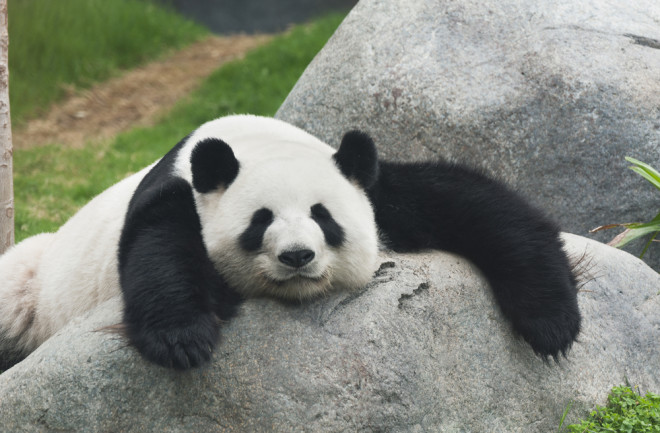 (Credit: Lee Yiu Tung/Shutterstock) It looks like the Labor Day weekend was also a chance for pandas to celebrate. At a meeting this weekend in Hawaii, the International Union for Conservation of Nature (IUCN) downgraded the giant panda from "endangered" to "vulnerable," reflecting a steady increase in panda numbers over the past decade.

An Icon Back From the Brink

Giant pandas are icons of the conservation movement — they even appear on the logo of the World Wildlife Fund. Ever since its inception in the 1960's, pandas have been on the IUCN's Red List of endangered species ever since its inception in the 1960's due to habitat loss and poaching threats in their native China. Sustained efforts by conservation organizations and the Chinese government began to pull the population back from the brink of extinction in the 1980s, and that work appear to be paying off. There are now an estimated 1,864 adult pandas living in the wild today in China. China's government has taken pains to put the re-classification in context, however. Speaking to the AP, they say that the move may be a positive sign, but conservation efforts need to continue at the same pace as before, or the panda risks slipping back towards extinction. Climate change may pose the most dire threat to their livelihood, as it could destroy some 35 percent of their bamboo forest habitat in years to come. Additionally, pandas are currently spread out across a patchwork of isolated habitats, where small groups face increased risks and are less likely to produce offspring. Pandas are famously hesitant to reproduce —even in zoos — in part because they ovulate only once a year for just a few days.

Not All Good News

The IUCN conference wasn't good news for everyone, however. The organization also upgraded eastern gorillas to "critically endangered" this weekend after recent studies showed that their populations had declined by more than 70 percent over the past 20 years. The gorillas haven't benefitted from the kind of sustained, intensive rehabilitation efforts aimed at China's pandas. Nor are they likely to attract the same attention, for a variety of reasons, chief among them the fact that they reside in war-torn nations with more pressing problems. While the giant pandas may make for an impressive comeback story, the sheer amount of effort it took to pull it off does not bode well for the thousands of species still populating the Red List.