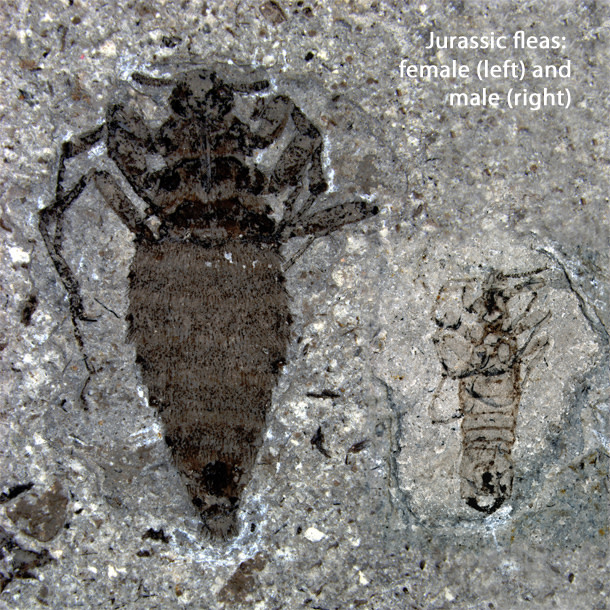 The shortest poem ever written is known as Lines on theAntiquity of Microbes or, more simply, as Fleas. It goes: Adam/ Had ‘em. It’s a cute verse, but we don’t need Blblical references to know what the first fleas fed upon. As with many questions about ancient life, we can turn to fossils. Among a horde of insect fossils recovered from China and Mongolia, Diying Huang from the Chinese Academy of Sciences has discovered several species of giant fleas. There are nine individuals from three different species, and they hail from the middle Jurassic and early Cretaceous periods. “These outcrops have given us thousands of exquisitely preserved insects, but fewer than ten fleas,” says Andre Nel, who led the study. The fossilised insects had many features that identify them as fleas – ancient precursors to the ones we know and loathe. But they had many unusual traits too. For a start, they were much bigger. While modern fleas are just a few millimetres long, some of these ancient forms were ten times bigger. The males grew between 8 and 15 millimetres in length and the females reached between 14 and 20 millimetres. They also hadn’t evolved many of the extreme specialisations that today’s fleas possess. They didn’t have the long hindlegs that allow modern fleas to leap great distances. Instead, their legs ended in long, curved claws, suggest that they were adapted to hang onto fur or feathers. They probably hung on to the coats of feathered dinosaurs and the earliest mammals. And they would have certainly stabbed their hosts’ skin and sucked their hosts’ blood. Huang found that their mouthparts that were much longer and stouter than those of modern fleas – like drinking straws compared to hypodermic needles. The stabbing siphons also provide a clue about the origins of fleas. They are very much like those of scorpionflies – a group of insects named after the males’ large genitals, which look like a scorpion’s sting. Many scorpionflies (like the one below) have long snouts that they use to probe the depths of flowers, and suck up nectar and pollen. At some point in their history, some of their members adapted to sucking a bloodier liquid. “They probably began to reduce their antennae, eyes and wings, and to develop legs adapted for grasping on the bases of the feathers or fur,” says Nels. That takes us up to the earliest fleas at the start of the Cretaceous period. By the end of the Cretaceous, these insects had also evolved specialised legs that allowed them to jump from one host to another. They started to look like Tarwinia, another extinct species that, until now, was the earliest known flea. Flies also evolved from another group of scorpionflies, which makes them a sister group to the fleas. But they made their debut during the Triassic period, some 50 or 60 million years before the fleas arrived. Nels thinks that fleas emerged much later because they couldn’t hang on to the naked skin of Triassic vertebrates. Only in the Jurassic, when animals started to evolve feathers and fur, could the early fleas anchor themselves while they sucked.

Huang, Engel, Cai & Nel. 2012. Diverse transitional giant fleas from the Mesozoic era of China. Nature http://dx.doi.org/10.1038/nature10839Note: There are at least three species of the giant fleas but because of space restrictions, they haven’t been formally described yet – Huang will do so in another paper. More on insect evolution 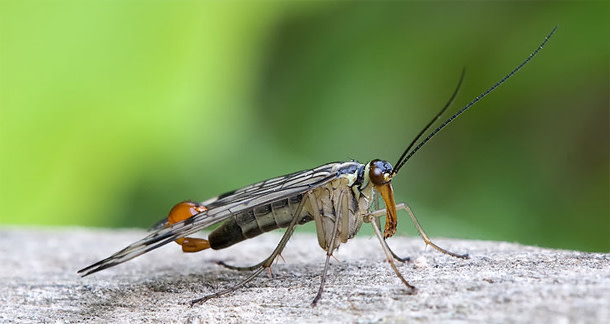