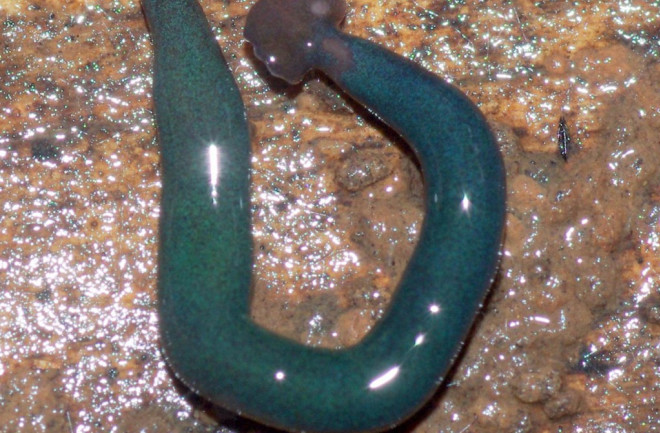 This giant invasive flatworm, a Diversibipalium 'blue,' made its way to a French territory off Africa. (Credit: Laurent Charles - CCBY 4.0) Worms have a way of appearing in strange, unwanted places: Inside feet, eyeballs and stomachs. Turns out some are even invading countries. Giant predatory flatworms have inched their way into France and its overseas territories on four continents, according to a study released Tuesday in PeerJ. The invasive flatworms were documented by citizen scientists and managed to stay under the radar for more than two decades. This is the first study to cover the invasion.

The study is based on contributions from more than 100 citizen scientists, dating as far back as 1999. Three species were found in France Bipalium kewense, Diversibipalium multilineatum, and an unnamed Diversibipalium ‘black’ species. B. kewense was also spotted in French territories in Oceania, South America, Central America, and southeast Africa.

was seen in South America, Central America and the United States (Florida). There was even a possible new species, a new blue variant of Diversibipalium found on an island off southeast Africa. These flatworms are part of a group known as bipaliines and are sometimes called hammerhead flatworms, for obvious reasons. They can also reach up to 1 meter, or more than 3 feet, in length (*shudder*). While other invasive flatworms have been documented in these regions, they are rather small, only about two inches in length at a maximum. Hammerhead flatworms are originally from Southeast Asia, but are now dispersed across the world thanks largely to the global trade in plants. Hammerhead flatworms feed on animals living in the soil — earthworms are a common target for some species. The creatures are likely able to track their prey through the soil, and use sticky secretions to grab hold of them. Digestion begins even before ingestion in some cases — the worms eject part of their throat to begin breaking prey down before sucking the softened tissues back inside. Scientists warn that these soil dwellers could affect the biodiversity of native animals and soil ecology, though studies of their ecological impact have yet to be completed. "As scientists, we were amazed that these long and brightly colored worms could escape the attention of scientists and authorities in a European developed country for such a long time; improved awareness about land planarians is certainly necessary," the authors wrote in the study. Stay alert, folks.