Giant dinosaurs used the planet to warm their eggs 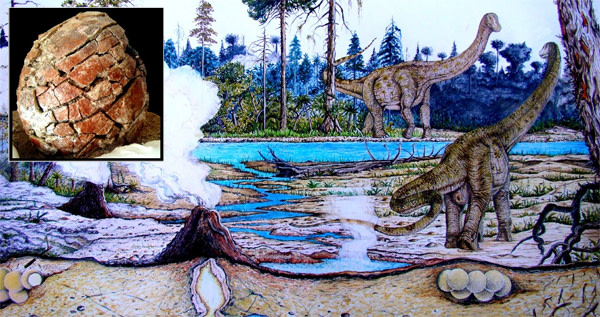 At Argentina’s Sanagasta Geological Park, there is a volcanic nursery for giants. It’s a site that is strewn with the fossilised eggs of giant dinosaurs – sauropods. Each of their 80 or so egg clusters sits next to a geyser, a hot vent or other volcanically heated sites. This is no coincidence – eggs need moisture and heat to incubate properly and big eggs are particularly demanding. These dinosaurs were using the planet to keep their babies warm. Argentina is a haven for any palaeontologist looking for dinosaur eggs. Different provinces have yielded several large nesting sites. Most belonged to the giant sauropods and some even contain eggs with fossilised embryos inside. The sites have told us much about how dinosaurs looked after their young and even what ate baby dinosaurs but until now, scientists have largely ignored the question of why these particular sites were such inviting locations for expectant dinosaurs. Enter Gerald Grellet-Tinner & Lucas Fiorelli. They were the duo who discovered the Sanagasta egg clutches in a valley heavy with geothermal activity. The area is littered with geysers and vents, each around 4 metres high and at least 15 metres wide. Today, they are surrounded by characteristic crystals and minerals, as well as traces of fossilised mud. These signs tell us that all of these structures were already active during the Cretaceous period although they (like the dinosaurs whose eggs they incubated) are long extinct. The eggs themselves told Grellet-Tinner and Fiorelli that they were buried in heavily moist soil. For a start, each egg clutch sites within 3 metres of one of these geothermal structures. The shells have an extensive network of pores. These give them a spongy appearance in cross-section (see below), and they suggest that the eggs were buried in soil that was saturated in water. On the shell’s outer surface, each pore sits between small, rounded nodules that prevent sediment from clogging them up. 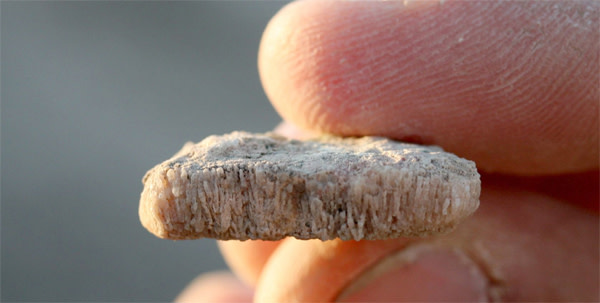 Each huge egg measured around 21 centimetres in diameter. Their shells are almost a centimetre thick and their fragments have been preserved well enough that they could be reassembled into a whole. They are so big and thick that they must have been laid by very large animal indeed, probably one of the giant sauropods. Unfortunately, no skeletons have actually been found so Grellet-Tinner and Fiorelli can’t tell us what species laid these eggs. Whatever they were, they clearly laid their eggs in the valley repeatedly and en masse, forming a long-lasting relationship with this special place. It’s not surprising that at least some extinct dinosaurs did this because some of their living relatives – birds – use the same strategy. The megapodes – a group of birds including brush turkeys and mallee fowl – all bury their eggs in soil that they maintain at specific temperatures, kicking soil on and off an incubation mound and taking the temperature with their sensitive beaks. The rare Polynesian megapode probably comes closest –in its home at Niuafo Island, Tonga, it buries its eggs at nesting sites on that are heated by volcanoes. It’s a strategy that has clearly been around for millions of years. Reference: Nature Communicationshttp://dx.doi.org/10.1038/ncomms1031All images courtesy of Gerald Grellet-Tinner/Lucas Fiorelli More on dinosaur reproduction: