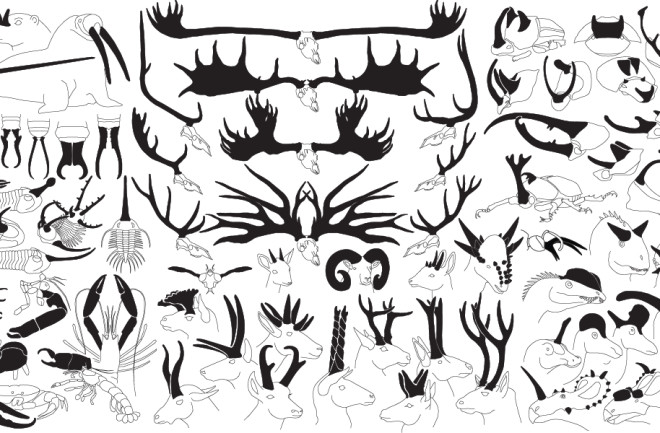 Deer, crabs, beetles, dinosaurs: This drawing offers just a taste of the broad array of weapons sported by males in the animal kingdom. (Credit: Modified from D.J. Emlen/AR of Ecology, Evolution and Systematics 2008)

In the vast arsenal of animal weaponry, the most exaggerated, elaborate and diverse devices such as tusks, claws and antlers have not been shaped by a need to fend off fierce predators. Rather, these impressive forms are driven by sex.

“Everybody understands at a gut level that it’s usually males that have flashy displays or weapons like tusks and antlers,” says Doug Emlen, an animal weapon expert at the University of Montana in Missoula. Biologists say that these fantastic shapes — from the giant curved tusks of woolly mammoths to the nightmarish jaws of stag beetles — evolved to ward off competition from rival males and to impress females.

Examples of such sexually selected weapons abound throughout the animal kingdom in insects, fish, crustaceans, reptiles and mammals as varied as narwhal, rhinoceros and moose. Even extinct species such as trilobites and dinosaurs sported elaborate projections. The number and variety of examples argue that evolution has turned to weaponry time and again in the race to reproduce successfully.

It’s such a common theme that Emlen had to persuade his editors to include seven detailed, full-page line drawings in a survey of nature’s weapons that he wrote for the 2008 Annual Review of Ecology, Evolution, and Systematics, featuring more than 280 examples of fantastical spikes, horns, antlers, pincers, tusks, claws, extended jaws, saws and spears. The illustration above offers a taste.

Scientists still debate the degree to which female choice plays a role in shaping the weapons’ flair and are still trying to figure out what factors drive the diversity of weapon forms seen among even closely related species. But it’s clear that the wild array of weapons evolved to aid successful mating.

Like the structures, types of combat vary greatly. Rhinoceros beetles, named for their rhino-like horns, guard access to the oozes of tree sap that females feed upon before laying eggs. Rival males size each other up, and if their horns’ sizes are similarly matched, a face-off ensues and each uses his horns to try to flip, pry and toss his rival off the tree branch.

Most species of male fiddler crabs guard their burrows, where mating takes place. Dueling males shove and tap on each other’s single, enlarged claw — and, should the fight escalate, they lock claws, secret-handshake style, as if they’re testing the other’s strength. If one decides he has the upper hand, he flings his opponent away from the burrow.

The fearsome weapons seem to evolve whenever three criteria are met, Emlen says. One: Males must be competing over either resources such as food or over females. Two: It’s possible for access to those resources to successfully be guarded. And three: Males of the species compete in one-on-one duels.

But the fighting is almost never to the death and rarely results in serious wounds. Scientists say that this supports the idea that these weapons are built for rivalry — their designs optimized not for destruction but for power struggles. Indeed, variation in the size of male weaponry is huge, Emlen notes: While overall body size among adult male elk might vary by a factor of 2 at most, their antler racks can vary by a factor of more than 30, he says. And the most dazzling weapons act largely as deterrents, with actual fights breaking out only when males are closely matched.

As the weapons grow bigger and flashier, they come with the cost of producing and lugging around such big structures. (And sometimes other costs: Male fiddler crabs can only stuff algae in their mouths with one claw.) Studies show that the weapons’ sizes are sensitive to nutrition, parasite load, stress and overall physical condition — and so the healthiest, most fit individuals sport the most impressive weapons.

Researchers consider these ostentatious male weapons to be honest signals — advertising the owner’s might and fitness accurately. And not just physical fitness. A study of nearly 200 Iberian red deer stags measured the size and complexity of the animals’ antlers and found that bigger and more elaborate racks correlated with both bigger testes and faster-swimming sperm. From that and other evidence, many biologists think that bigger weapons can advertise reproductive superiority, too.

And while Emlen believes that male weapons evolved primarily for the purposes of male-male rivalry battles, comparative physiologist Brook Swanson of Gonzaga University in Spokane, Washington, argues that those signals are almost certainly also being assessed by females choosing mates. “Even if a male could beat up all the other males, females almost always have a choice among mates,” he says.

Take those fiddler crabs. Males of more than 100 species of the crabs have enlarged claws, and research suggests that the females can be picky. Some will cruise an area of multiple male burrows and size up the weapons being waved at them, among other things, before selecting a mate. “We don’t know what the female’s thinking, but she’s taking into account a bunch of complicated information,” Swanson says.

Though scientists believe that the primary role for these animal weapons is in reproduction, there are cases in which the weapons also serve as deterrents or defenses against predators — likely as an evolutionary bonus. Elk antlers are a case in point. Unlike many other North American species in the deer family, elk hang onto their antlers until March, long after the mating season has ended in October. When Matt Metz, a PhD student at the University of Montana, and his colleagues tracked wolf kills in Yellowstone National Park they found that during March, wolves are three to four times more likely to attack an antlerless male elk than one still wearing his rack.

Since elk rarely use the antlers in defense, preferring to rear up and kick predators with their front hooves, presumably the structures serve as deterrents, Metz says. Yet if antler weapons had evolved primarily as a defense against predators, it wouldn’t make sense to shed them at all, he adds — and females should have them, too.

Why nature came up with such a bizarre array of weapon shapes and forms remains a bit of a mystery. But as a general rule, Swanson says, evolution tended to exaggerate structures already in existence. Crabs and lobsters have pincer claws that over evolutionary time became enlarged. And arthropods (spiders, insects and crustaceans) have exoskeletons that genetic changes could sculpt to form projections such as the horns or giant mandibles seen in beetles.

Weapons also are probably molded by the type of fighting and where it’s done — as borne out by work on the shapes of rhinoceros beetle horns by evolutionary biologist Erin McCullough. As a graduate student with Emlen, she spent two summers in Taiwan videotaping battles of the Japanese horned beetle, which has a pitchfork-shaped horn. She compared its fights to those of the Hercules beetle, which sports thick, pinching horns, and a species of Golofa beetle, which has thinner, sword-like horns. Each fights in slightly different ways, all with the goal of flicking their opponent off a tree branch or bamboo shoot.

Two Hercules beetles (Dynastes hercules) battle it out. Place your bets! Then watch to the end to see which male wins the fight and flips its rival off the tree branch. (Credit: Jen-Pan Huang)

McCullough, now a postdoctoral researcher at Syracuse University in New York, first measured how much force was needed to dislodge an average-size male from a branch. Next, she CT-scanned the critters’ horns, built 3-D computer models of the structures and used engineering tools to calculate the stresses and strains that the structures could withstand. She found that each horn performed best under the forces of its species-specific fighting style. “This is a big component for why different species have different weapons,” she says.

In October, an international group of researchers used the same computer modeling techniques to suggest that the largest antlers ever to exist — the 12-feet-across by 5-feet-high rack of the prehistoric Irish elk — were used for male sparring, too.

But McCullough notes that the scariest, showiest weapons are not always very lethal. Some diversity, such as curlicues and extra tines, is probably driven by the display functions of weapons, she says.

Some of the largest animal weapons ever found adorned dinosaur heads. An example is seen in the horns and frills of the triceratops, a type of ceratopsid dinosaur — big-bodied herbivores that lived in large herds in open spaces, not unlike caribou. “They had the biggest skulls of land-living animals that ever lived, partly due to these big bony structures on their heads,” says Scott Sampson, paleontologist and executive director of the California Academy of Sciences in San Francisco.

Of course, it’s tricky to study dinosaur behavior, or even determine a skeleton’s sex, from fossils. Paleontologists continue to debate whether such unusual face decor was used to help dinosaur species recognize their own kind, for male-male mating contests or signals to females, or for defense. But Sampson says several lines of evidence persuade him that these horns were sexual weapons or displays rather than spears to fend off predators.

Importantly, these features weren’t fully grown until the animals reached adult size and reproductive age. And many of the features of dinosaur horns, spikes and frills were “lousy” as weapons against carnivorous predators, Sampson says. Some were thin to the point of fragility or curved in seemingly the wrong direction. Take, for example, Kosmoceratops, a flamboyant fossil found in southern Utah that sported 15 horns on its face, the top of its skull and its bony frill, some of which curve back on themselves. “I’m quite certain this pattern is all about show,” Sampson says. Ceratopsids, he says, would have been more likely to use their sheer size as a weapon against predators.

From spines and plates on late Cretaceous behemoths to horns on tiny, modern-day beetles, making and carrying flashy weapons can come at a huge energy cost. An elk’s antlers are akin to a 180-pound man wearing a 12-pound gold chain around his neck.

But the costs are worth it. “In a lot of mating systems, if you don’t produce a weapon, then you have zero success,” Swanson says. “You have no choice but to play the game.”