Getting Rid of Invasive Species With a Little Electric Shock 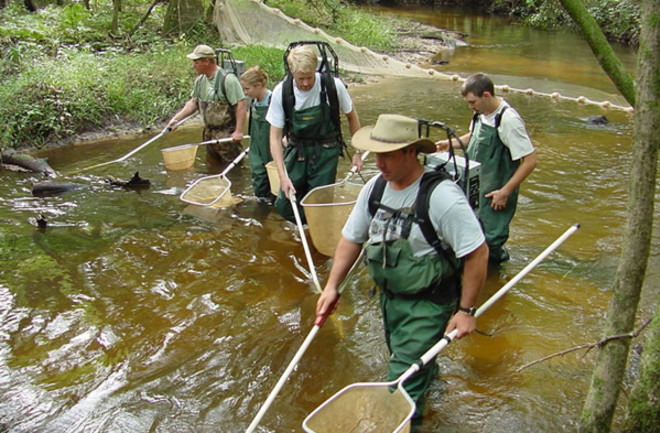 Researchers collect fish using backpack electrofishing. Image courtesy South Carolina Department of Natural Resources The problem of invasive species is a slippery one for fisheries managers. One of the most notorious invaders, Asian carp, now dominates large portions of freshwater in the central U.S., and keeping them out of the Great Lakes could cost upward of $18 billion, according to a recent study by the U.S. Army Corps of Engineers. There are a number of preventative measures in place to keep invasives from entering new waters. But at present there are few measures that fisheries managers can use to get rid of invasive fish once they’ve established themselves: basically, toxic chemicals, or targeted fishing. But a better remedy may be as simple as a small dose of electricity. That’s the idea behind a recent study, which found that electrically charged wands can help eradicate invasive fish in small streams with less collateral damage to the ecosystem.

Battle of the Trout

For years, ecologists in Montana have been tracking an underwater fight. Brook trout, an invasivespecies in the Upper Missouri River Basin, have increasingly replaced the native westslope cutthroat trout. The two species compete for scarce food, and brook trout appear to be winning. This concerns local ecologists because populations of the westslope cutthroat trout, Montana’s state fish, are in steep decline. The standard response in other waterways has been to use toxic chemicals called piscicides. But these chemicals are problematic – they kill native and invasive fish alike, and also kill many of the aquatic insects that fish eat, says Reuben Goforth, a professor at Purdue University. So the Montana team wanted to try a better way. They turned to backpack electrofishing, a technique that’s widely used at present to sample fish populations. It works like this: Researchers carry backpacks with electricity generators powered by 24-volt batteries. Those generators are hooked up to wands that carry a flow of positive electric charges. (If you’re imagining a setup that looks like the Ghostbusters proton pack, you’re not far off.) The researchers dunk the wands into streams. Soon, fish begin to cluster near the positive charges, a phenomenon known as galvanotaxis. With both natives and invasives gathered, the researchers send an electric burst of 100 to 600 volts into the water, which stuns the fish. The researchers net the temporarily immobilized fish, separate out the invasives (which can be cooked) and return the natives to the stream.

The researchers used this technique on four streams in the Montana Rockies over the course of 13 years. They performed the electrofishing twice yearly: in the fall, when the fish spawn, and in the early winter, when they congregate. Today, after killing an estimated 17,000 invasive fish, the researchers say they have completely eliminated invasive brook trout from the treated stream segments, which ranged in size from 0.3 to 1.8 miles. And they did so without having to use piscicides. “The cost we figured for electrofishing removal was comparable to piscicides in these smaller streams,” says Brad Shepard, the study’s lead author. The results were published in September, in the North American Journal of Fisheries Management.