Getting Personal: How I Survived Malaria, Bats, And Broken Bones In South Sudan 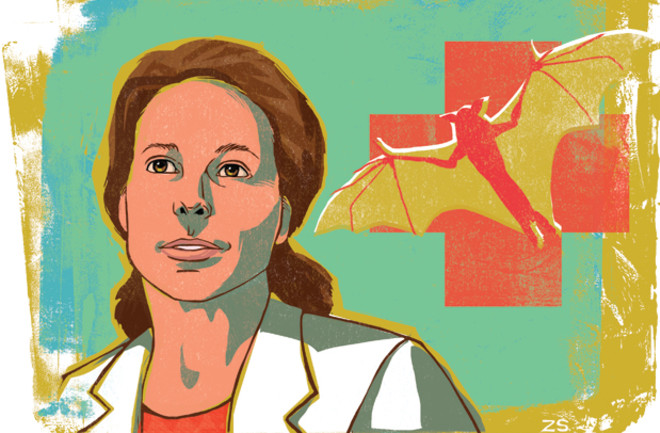 Last October DeeAnn Reeder made her fourth annual pilgrimage to catalog the rich assortment of bats and other small mammals in war-torn South Sudan. The Bucknell University biologist, renowned for her work tracking down the fungus wiping out millions of bats in North America, brought her husband, Tom, and their two teenage kids to help out. Reeder wore biohazard gear while performing bat dissections, but that couldn’t ward off the string of medical disasters that befell her loved ones. As she recalls in her own words, it isn’t easy performing the duties of wife, mother, caregiver, and field biologist—all at the same time—in Central Africa.

One evening we headed out to go trapping. I was in the Land Cruiser with my son and some wildlife officers, and Tom rode behind us on a motorcycle. The road was red clay, horrible. Eventually I noticed I hadn’t seen Tom in a while, and I told the driver we needed to turn around.

Tom’s bike had crashed, and I could see by the look on his face that he’d broken something. He said he’d gotten some dirt in his eye, run off the road, and flipped over the handlebars. The closest X-ray clinic was in Uganda, so that night we drove 40 miles south and bribed our way across the border. It turned out he’d snapped his collarbone. The doctors put his arm in a sling, and we drove back to our family compound the next day.

When we arrived, my graduate student was sick with malaria: high fever, vomiting. Then I called home to Pennsylvania to check on my daughter, who’d returned after spending the first part of the trip with us. I found out she’d contracted malaria, too, and had to go to the hospital. I used a satellite phone to contact her doctors. My husband was laid up on painkillers, my graduate student was in a zombie state, but the work had to get done. For the last two weeks, it was pretty much a one-woman show.

Despite everything, we accomplished a lot. Our goal is to catalog the hundreds of mammal species, of which at least 160 are bats and rodents, in this diverse yet largely unexplored ecosystem. On this trip we collected more than 260 complete specimens, including some new to science. I also brought home skins and little tubes full of tissues, insects, and parasites. After spending three days back home looking through my stuff, I was like, “OK! Let’s go back!”

As told to Kenneth Miller