Getting Personal: How I Rallied Locals to Help Save Madagascar’s Lemurs 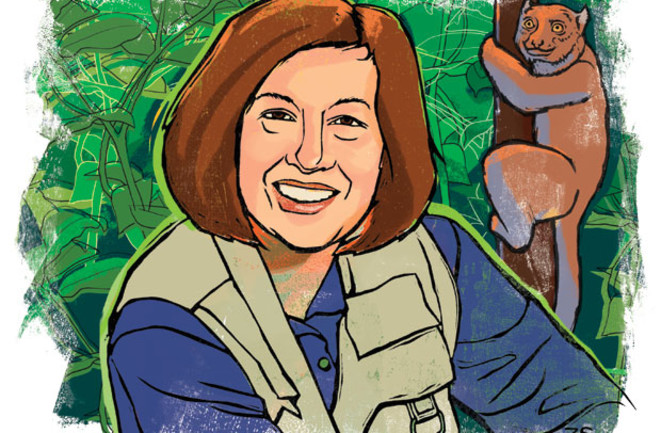 Primatologist Patricia Wright traveled to Madagascar in 1986, when Duke University sent her to try to locate the greater bamboo lemur, a primate species no one had seen in 50 years. Not only did she find it, but she also discovered another, unknown primate, the golden bamboo lemur. Unfortunately, both lemurs lived in a rainforest threatened by logging. So Wright decided to transform the area into Ranomafana National Park, protecting it from deforestation and hunting. She continues to conduct research there today. In her own words, this is how it came about.

It was a terrible time. The new species I discovered and the greater bamboo lemur were both about to go extinct because of deforestation. The head of the Department of Water and Forests in Madagascar said they could make the place a protected area, but it would take a lot of money and the department had none. That’s the day I became a conservationist. I raised the funds through grants from government and nonprofit programs, but the biggest challenge was that, to make a park, I had to walk the area and decide where the boundary should be. And I had to convince everybody who lived in and around the park that this was a good idea. Madagascar has extremely steep mountains, and it was slippery because we were in a rainforest. There were no trails and the maps weren’t accurate. And we had to carry rice for ourselves, our porters, the villagers we might meet. Trips were limited to seven days because that was as much rice as we could carry. Then we’d have to go back, get more rice, and start again.

Whenever we got to a village, everybody would be terrified. The last time they had seen a white face was in 1947, when they rebelled against French rule and many locals were massacred. We’d walk into a village and people would take off running. Children were screaming. We would just stand there until one of the elders came out. Then we would show him our paperwork and he would call everybody back and say, “OK, they’re not coming to eat us or kill us; they’re here to talk.”

We were told by our guide that we couldn’t go anywhere unless we brought this local rum. It’s some of the strongest alcohol I’ve ever had, really powerful stuff. It was the custom, so we had to drink it in every village. There was a lot of hiking and a lot of drinking. After seven trips over six months, all the villagers had agreed and we’d delineated the park, but I was very, very sick.

When I got back to Duke, the doctors were amazed. I had seven different kinds of parasites, including malaria, tapeworms, hookworms, and Giardia, which infects the small intestine. It took me two weeks to get back to normal. For a while I didn’t know if I was going to make it or not.

As told to Steven Kotlar