Getting Personal: How I Contained the Mississippi

A U.S. Army Corps of Engineers commander makes the tough, smart decisions necessary to save cities and lives. 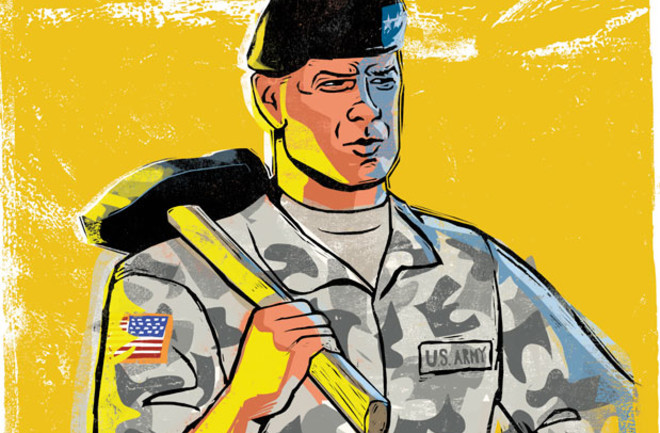 A year ago, an unusually rainy spring caused the Mississippi River’s most serious flooding since 1927. Record-setting water levels threatened Memphis, Baton Rouge, and New Orleans. It was up to Major General Michael Walsh, then commander of the Mississippi Valley division of the U.S. Army Corps of Engineers, to open floodgates and blow up levees, flooding some areas but averting catastrophe in major cities downstream. In his own words, here’s how he decided where to send the swelling waters.

We knew it was going to be a challenging flood year. I was working in an operations center aboard the Mississippi, the largest motor vessel on the river: 241 feet long, with five decks.

We have a comprehensive flood plan that dictates what to do when water reaches certain levels—where we need to allow controlled flooding to save cities downstream. By April 9 the flood gauges at Cairo, Illinois, which straddles the Missouri and Kentucky borders, exceeded allowable limits. We were supposed to open the nearby Birds Point–New Madrid Floodway when the water reached 61 feet, and on the night of May 1, the forecast level climbed to 63 feet. The decision was clear. If I didn’t open that floodway and relieve the pressure, levees would have broken somewhere else—but the angst level was very high. We planned to submerge 130,000 acres of farmland, and Missouri’s attorney general asked the Supreme Court to stop the operation, but the court refused the request. I gave the order and we blew up the floodway on May 2.

Our first move removed about a fifth of the water flowing through that area, but we hadn’t gone far enough—we still had to open up the next floodway, the Bonnet Carré, just upstream of New Orleans. We opened it on May 9, in bright sunshine, with a few hundred people out to watch.

Even then the river was flowing at record rates. If we didn’t want to lose Baton Rouge, we were going to have to open the Morganza spillway, which had been opened only once in 57 years. I met with farmers and residents of small towns who were going to be affected. My colleague Colonel Ed Fleming went to a public meeting at the firehouse, put his hand four feet up a pole, and said, “The water’s gonna come up to here,” just to get everybody’s attention. Luckily, there was enough time for people to hire trailers and bring their stuff to high ground. And that’s where just about everyone was when we opened Morganza on May 14. For the first time in the 83-year history of the Mississippi River and Tributaries Project, we had three out of four floodways open.

The entire floodplain filled, as expected, but not to the depth we had feared. Not one acre flooded that wasn’t projected to flood, and there were zero fatalities. No doubt about it: If we hadn’t operated those spillways, we would have lost the levees downstream. Baton Rouge and New Orleans likely would have been under water.

As told to Bruce Grierson