Getting Personal: How I Became Bait for Bloodsucking Leeches 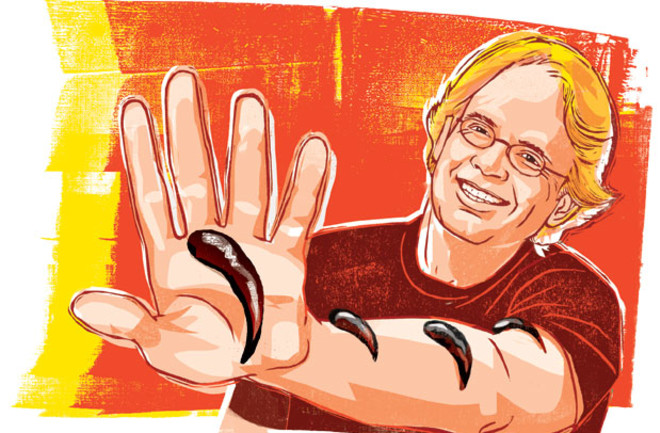 For most zoologists, fieldwork involves lying low and watching quietly as animals wander by. That is not Mark Siddall’s approach. Instead, he rolls up his pant legs, wades into murky waters, and calmly becomes a host for bloodsucking leeches. Siddall, a curator of invertebrate zoology at the American Museum of Natural History in New York, is one of the world’s foremost leech experts. His particular interest is learning how the parasites developed the ability to keep the blood of their victims flowing; his research could lead to new anti-clotting drugs for humans. In his own words, he describes a recent successful leech encounter.

Heart attacks and strokes result from clots. It turns out leeches have already figured out how to prevent clots over the course of their evolution. I want to learn about all the molecules they use to accomplish this, so my job is to find as many different species of leeches as I can.

My expedition to Peru was especially fruitful. We started out in the Andes Mountains, elevation 16,000 feet, to look for a lake that had been recorded in the 1880s as having the highest-altitude leech ever found. We found the site, but the problem was that local mining operations had obliterated the lake. Fortunately, just as we were about to leave for lower ground, I spotted another small lake nearby. We jumped in, turned over some rocks to unsettle any leeches that might be in the sediment, and felt some pinches on the skin. We found the highest leech ever, a new species I’m still trying to classify.

Then we flew down to northeastern Peru and took a three-hour boat ride on the headwaters of the Amazon River. I had my fiancée with me (she since married me, despite this trip). At one point, we wandered through a pond. The water was up to my chest, up to her chin. And we found a blood-feeding leech there—another new species, Oxyptychus bora.

To cap it all off, my colleague Renzo Arauco-Brown and I finalized a paper on an Amazonian leech he had found in a person’s nostrils. (That was new to me, although I once had to take a leech out of someone’s ear—that was awkward.) This leech had a jaw structure we had never seen before: Instead of having three jaws and about 100 small teeth, like most leeches, it has one jaw and eight large teeth. Its bite supposedly hurts like hell. We named it Tyrannobdella rex, or “tyrant leech king.” So far it’s been found only in nostrils, but similar species feed in other mucous membranes, like those in the eyes and the rectum.

As told to Erik Vance