Getting Big Takes Time...Millions and Millions of Generations, Say Biologists 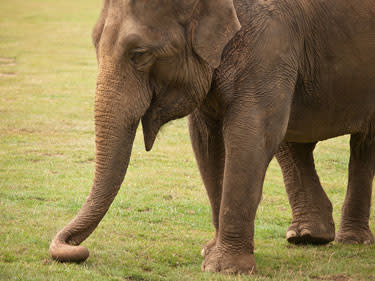 Creatures as large as elephants are unusual; it takes a long time to evolve such size.

How long does it take for a mammal as small as a mouse to evolve into something as large as an elephant? A really, really long time, a recent study has found

: about 24 million generations, at minimum. To get that number, researchers looked at the evolution of body mass over the last 70 million years, after the dinosaurs went extinct and surviving animals expanded into the ecological niches they left behind. That estimate is far longer than earlier estimates, which, extrapolating from bursts of super-fast evolution in mice, range from just 200,000 to 2 million generations. Such speedy evolution, in actuality, is probably not sustainable over the long term---hence the lengthy new estimate. Getting smaller, on the other hand, is a much shorter process, happening up to 30 times faster. Evolving to a smaller size might be easier because smaller animals reach reproductive maturity more quickly, the researchers suggest. Or it could reflect the greater availability of ecological niches for tiny organisms: a scrap of grassland can feed a fieldmouse, but an elephant needs acres. Certain physical constraints---the pull of gravity, for instance---might also make great size difficult to attain without unusual, physiologically expensive adaptations. Tellingly, the rate of growth changes when you look at marine mammals, which are supported by the water around them. Body size can grow twice as fast in the water. Do we have any future behemoths scuttling around our feet today? Such extreme growth requires a lot of resources, the researchers say, so as long as humans are dominating the planet's resources, it's unlikely that anything will evolve to such glorious heights as elephants have. That's another side effect of taking up most of the space: stunting future creatures' growth.