Get Lost in Mega-Tunnels Dug by South American Megafauna

Paleoburrows may look like caves, but these tunnels are remnants of past (giant) diggers. 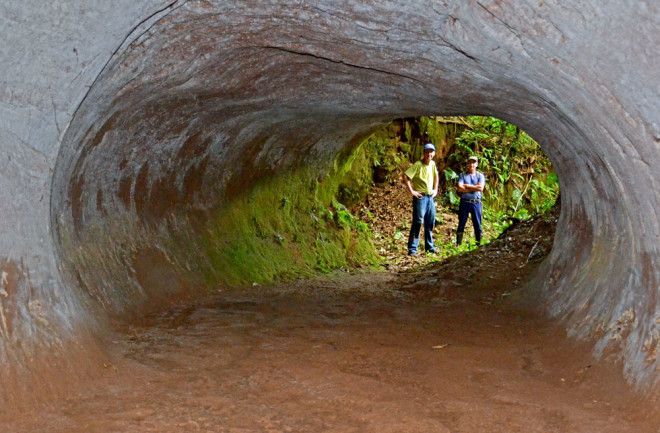 Looking into a large paleoburrow in Brazil. (Courtesy: Heinrich Frank)

It was in 2010 that Amilcar Adamy first investigated rumors of an impressive cave in southern Brazil.

A geologist with the Brazilian Geological Survey (known by its Portuguese acronym, CPRM) Adamy was at the time working on a general survey of the Amazonian state of Rondonia. After asking around, he eventually found his way to a gaping hole on a wooded slope a few miles north of the Bolivian border.

Unable to contact the landowner, Adamy couldn’t study the cave in detail during that first encounter. But a preliminary inspection revealed it wasn’t the work of any natural geological process. He’d been in other caves nearby, formed by water within the same geology underlying this particular hillside. Those caves looked nothing like this large, round passage with a smooth floor.

“I’d never seen anything like it before,” said Adamy, who resolved to return for a closer look some day. “It really grabbed my attention. It didn’t look natural.

Inside the first paleoburrow discovered in the Amazon. It’s nearly twice as large as the second-largest known burrow, located elsewhere in Brazil. (Credit: Amilcar Adamy/CPRM)

A few years earlier, and about 1,700 miles to the southeast, another Brazilian geologist happened upon a different, equally peculiar cave. Heinrich Frank, a professor at the Federal University of Rio Grande do Sul, was zipping down the highway on a Friday afternoon when he passed a construction site in the town of Novo Hamburgo. There, in a bank where excavators had eaten away half of a hill, he saw a peculiar hole.

Local geology doesn’t yield such a sight, so Frank went back a few weeks later and crawled inside. It was a single shaft, about 15 feet long; at its end, while on his back, he found what looked like claw marks all over the ceiling. Unable to identify any natural geological explanation for the cave’s existence, he eventually concluded that it was a “paleoburrow,” dug, he believes, by an extinct species of giant ground sloth.

“I didn’t know there was such a thing as paleoburrows,” says Frank. “I’m a geologist, a professor, and I’d never even heard of them.”

Rise of the Burrow

Until the early 2000s, in fact, hardly any burrows attributed to extinct megafauna had been described in the scientific literature. That’s especially curious because, after his chance discovery in Novo Hamburgo, Frank caught the burrow bug and began finding them in droves.

Claw marks are clear signs from the engineers who dug the tunnel. (Courtesy: Heinrich Frank)

Surveying a 45-mile stretch of highway construction near the city of Porto Alegre, for example, Frank and his students identified paleoburrows in more than 70 percent of road cuts. Although many are completely filled with sediment, they remain readily apparent, standing out like dark, round knots in a dirt bank. Others are still open, like the one that first attracted Frank’s attention.

When Frank found a suitable passage, he squeezed through an elliptical shaft roughly four-feet wide, 65-feet long and lined with claw marks. Extrapolating from the original size of the hill sliced away for the highway, he calculated that the original burrow was about 250 feet long, not counting for twists and turns that it surely once included.

“There’s no geological process in the world that produces long tunnels with a circular or elliptical cross-section, which branch and rise and fall, with claw marks on the walls,” says Frank. “I’ve [also] seen dozens of caves that have inorganic origins, and in these cases, it’s very clear that digging animals had no role in their creation.”

Outside the entrance to a paleoburrow. (Courtesy: Heinrich Frank)

In his home state of Rio Grande do Sul, in the far south of Brazil, Frank has documented at least 1,500 paleoburrows so far. In Santa Catarina, just to the north, he’s found hundreds more and counting.

“In these burrows, sometimes you get the feeling that there’s some creature waiting around the next curve – that’s how much it feels like a prehistoric animal den,” he says.

The First in the Amazon

It wasn’t until 2015 that Amilcar Adamy of the CPRM had an opportunity to return to that strange cave in Rondonia. It turned out to be the first paleoburrow discovered in the Amazon, which is notable, but not the coolest part. It also turned out to be one of the largest ever measured, with branching tunnels altogether tallying about 2,000 feet in length. The main shafts — since enlarged by erosion — were originally more than six feet tall and three to five feet wide; an estimated 4,000 metric tons of dirt and rock were dug out of the hillside to create the burrow.

“This wasn’t made by one or two individuals,” says Adamy. “It was made by many, over generations.” Frank describes it as an exciting, though not particularly surprising, discovery.

“We knew that there could be burrows this big,” he says. “This huge one in Rondonia simply confirms that they do exist.”

In Rio Grande do Sul, Frank has found burrows that were originally several hundred feet long. More than 1,000 total feet of tunnel have been measured in another burrow in the Gandarela Mountains, far to the north in the state of Minas Gerais. Though he has yet to investigate, Frank’s received reports of one burrow more than 3,000 feet long in Santa Catarina.

Frank believes the biggest burrows — measuring up to five feet in diameter — were dug by ground sloths. He and his colleagues consider as possibilities several genera that once lived in South America and whose fossil remains suggest adaptation for serious digging: Catonyx, Glossotherium and the massive, several-ton Lestodon. Others believe that extinct armadillos such as Pampatherium, Holmesina or Propraopus, though smaller than the sloths, were responsible for even the largest burrows.

Regardless, the sheer size of the burrows is something that Frank and his colleagues are still trying to explain. Whether prehistoric sloths or armadillos were responsible, the burrows are far larger than would be necessary to shelter the animals that dug them from predators or the elements.

The giant armadillo, the largest living member of the family, weighs between 65 and 90 pounds and is found throughout much of South America. Its burrows are only about 16 inches in diameter and up to about 20 feet long.

“So if a 90-pound animal living today digs a 16-inch by 20-foot borrow, what would dig one five feet wide and 250 feet long?” asks Frank. “There’s no explanation – not predators, not climate, not humidity. I really don’t know.”

Dating the burrows also remains guesswork at best — animals don’t dig holes after they go extinct. However, they had to have been dug at least 8,000 to 10,000 years ago, when South America’s giant ground sloths and armadillos vanished. Dating organic material found in burrow sediments — which has yet to be done — would reveal when sediments washed in, but not necessarily when the burrow was dug. Frank says that speleothems, or mineral deposits, growing on burrow walls could be used to calculate an age, although that hasn’t been tried yet either.

Another head-scratcher is the strange geographic distribution of paleoburrows. While common in the southern Brazilian states of Rio Grande do Sul and Santa Catarina, they are, so far, almost unknown just to the south in Uruguay (though some of the first ever described were found even further south in Argentina). Likewise, very few have been found farther north in Brazil, and Frank is aware of just a tiny handful of possible burrows in other South American countries.

A closer look at those claw marks. (Credit: Heinrich Frank)

He doesn’t think he’s biased because he happens to live and work in the heart of burrow country. Frank has colleagues who have searched extensively elsewhere in Brazil and come up mostly empty. He’s also done sleuthing using Google, searching for images of caves posted by others. In the south of Brazil, he frequently identifies paleoburrows by details unwittingly captured in photos, like one of a smiling troop of Brazilian boy scouts posing in front of a cave wall covered with claw marks. In other parts of the country and continent, people post pictures of caves that they visit, but practically none of them look like they were originally dug by animals.

Though North America was also once home to giant ground sloths and giant armadillos, you won’t find paleoburrows here.

“The fact that we don’t have them here could simply be that we’ve overlooked them,” says Greg McDonald, a Bureau of Land Management paleontologist who studies extinct South American sloths. “[Or] it may be that we had them up here but didn’t have the right types of soils that allowed them to survive for a long time.”

Here, too, unanswered questions are raised by absence of paleoburrows. The beautiful armadillo, Dasypus bellus, an extinct creature about twice the size of today’s nine-banded armadillo, was widespread in Pleistocene North America and had forelimb morphology very similar to that of modern armadillos, which are enthusiastic burrowers. Beautiful amardillo remains are frequently found in caves, but not ones scientists have ever thought were actually dug by the animal.

In South America, giant sloths — some the size of elephants — roamed the surface, and were, perhaps, expert tunnel diggers. (Credit: Wikimedia Commons)

Another possibility, McDonald allows, is that paleoburrows are found in North America, but no one has paid them any attention, as was the case in South America until quite recently.

“Something can be out there and they’re so common and people just take them for granted,” he says. “And [no one knows] till somebody with a little bit of curiosity takes a closer look and says, ‘What’s forming these?’”

For the handful of scientists in South America studying paleoburrows, there’s a long list of research projects to design, all revolving around the same basic questions: who, why, what, where and when?

At the top of Frank’s list is to better describe patterns emerging from observations he’s collected studying paleoburrows for the past decade. Some are simple shafts; others are complicated works of underground engineering, with branching tunnels that twist and turn and rise and fall to form a network with more than one entrance. Some occasionally open up into much larger chambers. There are relatively small ones. Then there are the enormous ones.

“We need to figure out the patterns. We’re starting to understand this better,” Frank says. “And from there, we’ll be better able to infer what kinds of different animals were digging them.”