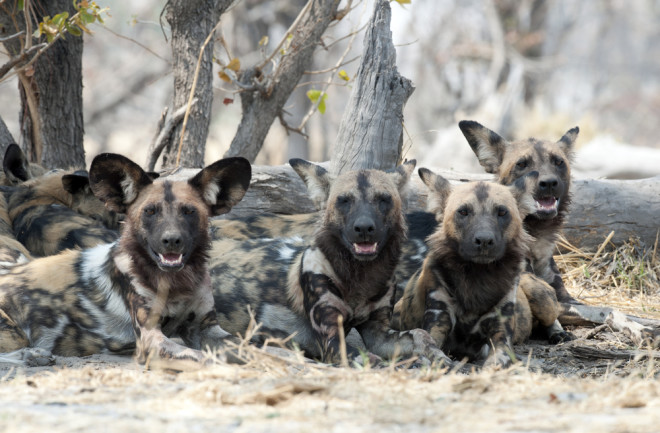 (Credit: John Carnemolla/Shutterstock) If you want to get something done in an African wild dog pack, you've got to be ready to sneeze. The animals seem to make group decisions based on a system of explosive exhalations — "sneezes" — that determine if they get up and go on the hunt. If the dogs reach a quorum of sorts, they all fall in line — no "bless you's" necessary.

Sneeze If You're With Me

Researchers from Swansea University and Taronga Conservation Society Australia noticed an abundance of "achoos" right before the wild dogs left to go on a hunt. While it was thought the motion could have something to do with clearing nasal passages to heighten smelling ability, they decided to investigate further. By following a pack around, they were able to tally up the sneezes from 68 pre-hunt gatherings and note when they occurred. Each time the dogs headed out to hunt, their movements were preceded by a number of sneezes, leading them to conclude that they were likely acting as a kind of voting system. The more sneezes they heard, the more likely it was that the dogs would leave. https://www.youtube.com/watch?v=DM9oPYhqO_Q African wild dogs are highly social creatures, and they rely on communication — along with a strict hierarchy — to maintain group cohesion. They hunt in packs to bring prey down, so having everyone on board with a hunt is key. Similarly, following along with the will of the majority is a necessity. It's no perfect democracy, though. An individuals' rank in the pack played a significant role in determining if a dog's opinion was respected. It took subdominant dogs three times as many sneezes to motivate the pack to action as it did for the dominant male and female. And, once they were on the move, the dominant dogs usually took the lead and determined where they went. Though sneezing may be unique, most social animals conduct some sort of group decision-making. Queen honeybees pipe, capuchin monkeys trill, apes grunt, and meerkats give "moving calls" all in service of reaching some sort of consensus. The dynamics differ by species, and sneezing is certainly new, but taking the will of the group into account is a necessity for animals that live and work together. It's nice to know democracy isn't solely a human construct.