Geoscience That Made Headlines in 2018 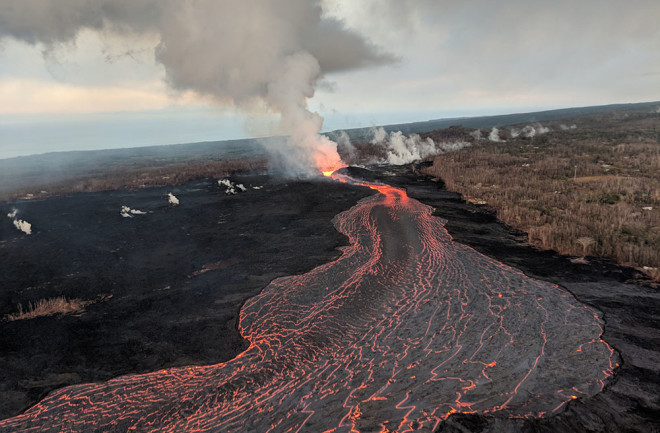 Lava flows from the LERZ eruption of Kīlauea, seen in July 2018. USGS/HVO.

2018 was quite a year across the geosciences … which is hardly shocking considering we live on the most geologically active planet in the solar system. Some of the events were tragic, because when it comes to headlines, that is what gets the most attention. Others were warnings of things that could be headed our way and others were, thankfully, downright exciting and uplifting. Here’s my quick takes on some of the big geoscience events from the year that was:

I suppose for a volcanologist like me, it would be hard to top the largest eruption in the United States since 1980. Not only that, the surprising eruption of Kīlauea from its Lower East Rift Zone (top) — the first in half a century —  dumped over 1 cubic kilometer of lava out and collapsed the summit of the Hawaiian volcano. Thankfully the eruption was free of fatalities and only had a few minor injuries. Unfortunately, many people in the lower East Rift Zone communities of Lelani Estates and Vacationland Hawaii lost the homes and livelihoods.

Indonesia was struck but multiple tsunamis in 2018, neither of which were caused by the same mechanisms that generated the 2004 Boxing Day tsunami. In September, a tsunami swept through parts of Sulawesi. This tsunami was likely caused by a submarine landslide triggered by an earthquake. The combined impact was over 2,200 deaths and tens of thousands of people made homeless, especially in the city of Palu.

This combination of synthetic aperture radar images taken by JAXA's ALOS-2 satellite and analyzed by Geospatial Information Authority of Japan shows Indonesia's Anak Krakatau volcano, center in images, before and after the Dec. 22, 2018, eruption. The images were taken on Aug. 20, 2018, left, and on Dec. 24, 2018, right, respectively. The satellite imagery showed a deformation on the volcano's southwest side. (JAXA - Geospatial Information Authority of Japan)

This combination of synthetic aperture radar images taken by JAXA’s ALOS-2 satellite and analyzed by Geospatial Information Authority of Japan shows Indonesia’s Anak Krakatau volcano, center in images, before and after the Dec. 22, 2018, eruption. The images were taken on Aug. 20, 2018, left, and on Dec. 24, 2018, right, respectively. The satellite imagery showed a deformation on the volcano’s southwest side. (JAXA – Geospatial Information Authority of Japan)

Just this month, a collapse of part of Anak Krakatau during an eruption triggered a tsunami in the Sunda Strait. Almost half of the volcano that grew inside the caldera formed by the massive 1883 eruption of Krakatau fell into the sea and the resulting tsunami has killed over 225 people so far. Since the collapse, the volcano has been producing explosive volcanic eruptions caused by magma interacting with seawater — something called Surtseyan-style eruptions.

A long-lasting seismic swarm had been occurring off the island of Mayotte in the Indian Ocean for months, but it wasn’t until November that the seismicity made the headlines. Whatever is causing the swarm produced seismic waves that were detected across the planet, although no singular large earthquakes happened. This planetary “ring” may be caused by something to do with Mayotte’s volcanic heritage — these earthquakes and tremor might be caused by magma rising up near the island under the sea, although Mayotte has not seen volcanic activity (that we know of) in over 4,000 years.

A magnitude 6.7 earthquake struck on the island of Hokkaido in Japan and due to the unstable soils of the hills in the region, dozens of massive landslides were triggered by the temblor. Over 40 people died in the earthquake and over 10,000 homes were destroyed by the landslides or earthquake. Before-and-after images of the area show how many hillslopes moved due to the shaking. The volcanic substrate in the area is made of relatively loose debris that weathers easily, likely adding to the intensity of the landslides.

First* Seismometer on the Surface of Mars

NASA's Insight lander placing a seismometer on the surface of Mars. NASA.

NASA’s Insight lander placing a seismometer on the surface of Mars. NASA.

NASA’s Insight lander reached Mars in November and since then, the robot has placed the first seismometer on the Martian surface. Yes, Viking did have a seismometer, but it was placed on the deck of those 1970’s landers, so they didn’t produce much useful data. The new seismometer on Insight is on the ground and such be able to detect Martian temblors so we can map out the interior of the planet. This is the first in what is hopefully a new wave of exogeology on Mars and beyond.

In late November, a magnitude 7 earthquake struck just outside of Anchorage in Alaska, causing significant damage but luckily little in the way of casualties. Roads collapses but were quickly repaired. This was the six large earthquake to strike near the city over the past century, but its relatively shallow depth and proximity to the city meant it was felt widely across the region.

In November, the U.S. government (reluctantly) released the latest climate report and the forecast is grim. Not only is climate change still occurring unabated, but the report clearly details the changes we are already seeing across the country. These include the massive wildfires like the Camp Fire in California, agricultural issues across the Midwest and more. The report predicts that these climate shifts will impact the U.S. economy negatively to the tune of 10% of the current GDP. 2018 already lines up to be the fourth-warmest since we started keeping climate records.

We Arrived at Bennu

The strange world of Bennu, seen by NASA's OSIRIS-REx mission in late 2018. NASA.

The strange world of Bennu, seen by NASA’s OSIRIS-REx mission in late 2018. NASA.

When I picture how objects in the early solar system might have looked, I picture Bennu. The small asteroid looks like a bunch of rocks stuck together, with a rubbly surface. As objects grew in the early solar system, they accreted material — meaning rubble in the solar nebula stuck together, getting bigger and bigger. Some grew big enough to form planets and moons, and even start melting like Earth. Smaller objects never did that and Bennu might be just one of those objects. NASA’s OSIRIS-REx mission arrived to study Bennu and hopefully collect a sample, much like Japan’s Hayabusa2 at the asteroid Ryugu.

2019 will start off with a bang, as New Horizons reaches the Kuiper Belt object Ultima Thule on the first day of the year. We’ve never visited one of these primordial worlds beyond Pluto and New Horizons will pass closer to Ultima Thule than it did to Pluto and Charon. It should be a great way to start off the new year!

If you have any geoscience stories that really caught your attention, leave them here in the comments!