George Williams has died: Reflections and an interview 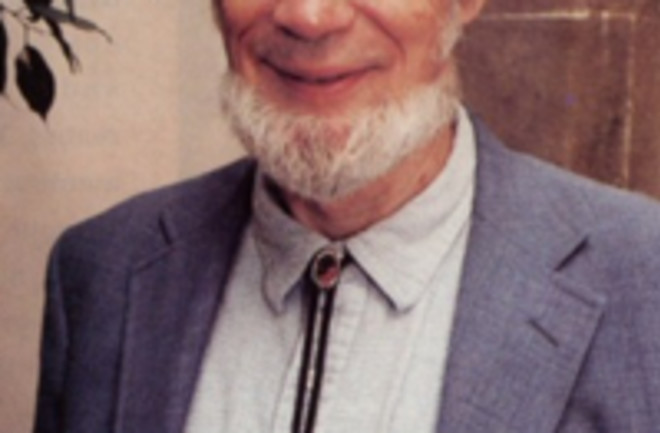 The evolutionary biologist George Williams died on Wednesday at the age of 84. He was one of the most important evolutionary biologists of the twentieth century, although he's not a familiar name beyond scientific circles. Gently, persistently, he reformulated how we think about natural selection and its many effects. As Richard Dawkins noted today, "He was one of the great evolutionary thinkers of my lifetime." In 2004, I wrote a profile of Williams for Science. The occasion was a meeting that was held in Williams's honor, in which one scientist after another stood up to talk about the influence he had had on their work. They investigated everything from human behavior to the mating of fish to disorders of pregnancy. How on Earth could he have so much influence in so many different directions? Permit me to self-plagiarize:

In the 1950s, when Williams was doing his graduate work at the University of California, Los Angeles, the science of evolutionary biology had just gone through two decades of spectacular advances. Ronald Fisher and Theodosius Dobzhansky, among others, had used the new science of genetics to work out some of the molecular underpinnings of evolution. Natural selection was now recognized as a change in the frequency of genes in a population. Yet one important part still hadn't been nailed down: the nature of adaptations. It was clear that adaptations evolved, but few biologists had given serious thought to the rules that govern the process.

Williams was struck by the ad hoc way that even prominent biologists would explain an adaptation. They'd claim that it had evolved because it provided some benefit; often, an entire population or species supposedly benefited. Williams recalls a lecture he heard by Alfred Emerson, a zoologist at the University of Chicago, about why people age and die. "He said growing old and dying is a good thing," Williams says. "We've evolved to do it so we get out of the way, so the young people can go on maintaining the species."

"I thought it was absolute nonsense," says Williams. Whenever people like Emerson claimed that an adaptation was for the good of a species, they never offered an explanation of how, from one generation to another, that potential benefit produced real evolutionary change. Williams suspected that in most cases, no such explanation existed. For him, the primary engine of evolutionary change was the one Darwin had written about in the Origin of Species: competition among individuals of the same species. Most biologists in the 1950s simply failed to think seriously enough about how natural selection could produce adaptations, he says.

Williams wrote a series of papers critiquing the notion that adaptations were generally good for a group or a species, rather than an individual. Ultimately, his work led to his classic 1966 book Adaptation and Natural Selection

. In it, Williams explained that almost every aspect of biology, no matter how puzzling, was the result of strict natural selection working on individuals.

Take a school of fish, for example. It seems as if every individual cooperates for the good of the group, working with others to avoid predators, even if it means that individual gets devoured in the process. Williams argued that the schooling behavior could instead be the product of individual fish trying to boost their personal chances of survival--by trying to get in the middle of the school and by watching other fish for signs of approaching predators.

Williams's book had an immediate, profound effect. "It fundamentally changed how biologists think about how natural selection works," says Randall Nesse, a psychiatrist at the University of Michigan, Ann Arbor, whose own studies of depression and other disorders are influenced by Williams.

One reason that the book was so effective was that Williams demonstrated how natural selection could influence the full course of a species' life history. It wasn't necessary to think of growing old as being for the good of the species, for example. Instead, Williams argued that the decline of old age could be caused by pleiotropy--in other words, the harmful side effects of genes selected for advantages they offered during youth. Just as long as the advantages of these genes outweighed the disadvantages, they would become widespread. Ironically, cancer, declining stamina, deteriorating vision, and various diseases of old age could all be the result of natural selection, says Williams: "Pleiotropy is the ultimate reason for all these things."

Williams argued that an organism faces these sorts of evolutionary tradeoffs throughout its lifetime: how much energy to invest in maturing before starting to reproduce, for example, or how much to invest in raising offspring before searching for another mate. Natural selection should find a balance between an animal's current investment in itself and its offspring and in potential future benefits. Williams speculated that animals could also keep track of how these factors change and adjust their behavior accordingly--like an investor deciding which stocks to keep or sell.

It was a privilege to talk to Williams

, first over the phone and then at the meeting itself. Williams was wonderfully articulate in all his answers. But it didn't take long for me to notice that he would sometimes forget a person's name. After one of these pauses, Williams stated, matter-of-factly, "Let me point out, I'm an Alzheimer's victim." And then he returned to his critique of group selection. My head started to spin. I tried to continue to play the part of the reporter, but I had to keep myself from contemplating the melancholy irony of the moment. Starting in 1978, when he was 52, Williams kept track of his physical decline. He would go once a year to a track near his home on Long Island and time how long it took him to run 1700 meters. Some years he ran a little faster than the last, but over the course of twelve years his performance got worse and worse. When George Williams won the Crafoord Prize in 1999 (a prize considered equivalent to the Nobel Prize for branches of biology other than physiology and medicine), he proudly showed

a graph of his slowing pace in order to drive home his theories on aging. During our conversation, Williams told me that his own Alzheimer's disease was the result of the same tradeoff. He was, as ever, the consummate biologist. This morning I pulled up the recording of that conversation, which took place in March 2004. What it lacks in crisp digital quality it makes up for in Williams's wide-ranging insights. In just under an hour, we covered five decades of thought about everything from why we have sex to why we get sick. I think, in its own small way, it's a valuable piece of history, so I've uploaded the recording to my web site. You can listen to it here