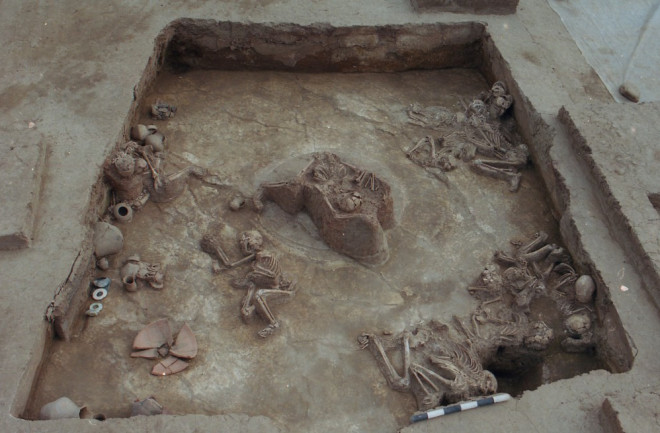 According to legend, Chinese civilization began with a Great Flood.

The floodwaters covered the plains of northern and central China for 22 years, until a ruler named Yu led a great dredging project that returned the river to its original channels. As a reward, the gods supposedly granted Yu a divine mandate to rule China and found its first imperial dynasty, the Xia.

For 1,000 years, the story of the Great Flood and Yu’s founding of Chinese civilization were handed down as oral history, before finally entering the written record in the first millennium BCE. With no hard evidence of Xia or the flood, however, scholars have long debated whether these events actually happened or were purely the stuff of legend.

Now, it turns out that the Great Flood may have been a real natural disaster that struck the Yellow River valley in about 1920 BCE.

A team of geologists, led by Wu Qinglong of Nanjing Normal University, discovered the remains of a landslide that, thousands of years ago, dammed up the Yellow River where it flows through Jishi Gorge in northern China’s Qinghai Province.

The natural dam would have been somewhere between the size of the Three Gorges Dam in China and the Hoover Dam in the U.S. It completely blocked the river, and the water that built up behind it eventually formed a lake 650 feet deep. Upstream of the dam, the researchers found sediments matching that which would accumulate on the bottom of a dammed lake.

A photo of Jishi Gorge upstream of the landslide dam. The grey silt deposits dozens of meters above the water level are lacustrine sediments. (Credit: Wu Qinglong)

Downstream, Wu Qinglong and his team found a wide swath of sediments that matched what a raging flood would have carried from Jishi Gorge: mostly fragments of purple-brown mudrock and green schist, washed into the lower Jishi Gorge and downstream into the Guanting Basin.

“At the mouth of the gorge, where the Yellow River enters Guanting Basin, the sediments reach 20m thickness and include boulders up to 2m in diameter,” they wrote in a paper published Thursday in Science.

Those sediments helped outline the size of the dammed lake and the area covered by the flood. Based on those areas, the researchers calculated that when the landslide dam finally gave way, it unleashed a torrent of 300,000 to 500,000 cubic meters of water per second.

“To put that into perspective, that’s roughly equivalent to the largest flood ever measured on the Amazon River, the world’s largest river. It’s among the largest known floods to have happened on Earth during the past 10,000 years, and it’s more than 500 times larger than a flood we might expect on the Yellow River from a massive rainfall event,” said coauthor Darryl Granger, a Purdue University geologist, during a teleconference to discuss the paper. “So this cataclysmic flood would have been a truly devastating event for anyone living on the Yellow River downstream.”

A Year of Disaster

The flood was the final straw in a rough year for the Qija vilages along this stretch of the Yellow River. It started with an earthquake that destroyed a settlement on a bend in the river in the Guanting Basin, a few miles south of the Jishi Gorge. People abandoned the site, now called Lajia, after the earthquake, leaving behind the bodies of at least five victims trapped in their collapsed homes.

For those who remained in the area downstream of the gorge, the flood would have come as a terrible surprise.

“Well, certainly the river would have dried up at that time downstream of the dam—they would have known that something was going on,” said Granger, but it’s unlikely that they would have expected a flood. Today, landslide dams are a well-known natural hazard associated with earthquakes in mountainous areas, but in the late Neolithic, that probably wasn’t the case.

And this was no mere local disaster. Wu Qinglong and his team estimate that the floodwaters could have traveled over 1,000 miles down the Yellow River, and perhaps even further. The flood would have breached the river’s natural levees, and it may even have broken free from its banks to carve a new course across the plains of northern China.

“The flood dates to the likely time period for China’s legendary Great Flood, and this is the first time a flood of scale large enough to account for it has been found,” said coauthor David Cohen, an archaeologist at National Taiwan University, during the teleconference. “The outburst flood could have caused social disruption downstream lasting for years, and if this is the case, we think it could have been the source of the Great Flood legend.”

Archaeologists used radiocarbon dating on their bones and determined that the earthquake—and, therefore, the flood that followed—struck around 1922 BCE. That lines up well with dates from charcoal found in the flood sediment, which put the flood somewhere between 2129 and 1770 BCE. If this catastrophic flood actually was the Great Flood from legend, then historians now have a date for it, which means they can date the start of the Xia dynasty as well—if it existed.

That’s the subject of intense debate among Chinese archaeologists and historians. One school of thought believes the Xia dynasty was real, but others say the story of its founding, and its fall, were likely made up by later rulers to justify their own claim to the Chinese throne. The Zhou dynasty wrested power from the Shang dynasty in the first millennium BCE. The Shang, according to the stories, seized power from the Xia dynasty when Emperor Yu’s line eventually lost its divine mandate to rule.

A view of the skeletons in cave F10 from another direction at Lajia site. (Credit: : Cai Linhai)

“There are some scholars who have argued that actually, what happened was stories about the Xia were created in order to demonstrate that the mandate to rule could transfer from one dynastic line to another, and they were created essentially by the Zhou to justify wresting the mandate to rule from the Shan,” explains Rowan Flad, an archaeologist at Harvard University who commented on the study.

Flad says there’s not enough evidence here to prove that Yu was a real person, even if this is the Great Flood of legend. However, the find does point to the idea that the legend may have been based in a real historical event.

“Our reasoning is like this: If the founding of the Xia dynasty is really tied to a Great Flood, then here we have evidence for a natural event that could have eventually been recorded as the Great Flood,” said Cohen. “If the Great Flood really happened, then perhaps it is also likely that the Xia Dynasty really existed, too. The two are directly tied to each other.”

The flood may, in fact, have played a role in founding Chinese dynastic civilization. The year 1922 BCE is around the time that cultures in the Yellow River valley were beginning to transition from the Neolithic to the early Bronze Age. Taming the flood could have driven people to adopt new technologies and paved the way for lowland agriculture in China, and the social upheaval it created probably also paved the way for the rise of a centralized state government.

By the early Bronze Age, people in China were already constructing huge earthworks —ramped earth walls and moats around settlements, like those of the Erlitou culture, 2500 km to the south of Jishi Gorge. “With Erlitou, we see hallmarks of the early Chinese state emerge, such as the production of bronze ritual vessels and weapons for the first time, and the construction of a walled settlement on a scale ten times larger than those in the late Neolithic cultures,” said Cohen.

Some archaeologists say that Erlitou sites may actually be the archaeological remains of the Xia dynasty itself, and the new dates for the flood could lend some support to that idea. Others are more skeptical, and some have even recently suggested that the Xia may have had their political center further to the north, in the area near Jishi Gorge.

The debate over where Yu built his dynasty, or whether he ever existed, is nowhere near settled, but Wu Qinglong and his team have shown that the legend is likely built on a real catastrophe.