Genetically Modified Non-Browning Apples Are Approved in the U.S. 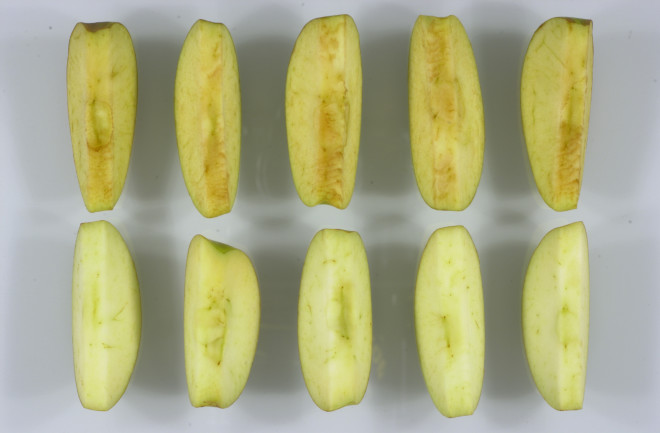 Arctic apple slices (bottom) compared to traditional apple slices. (Credit: Okanagan Specialty Fruits) It's a small victory for fruit-salad enthusiasts: The U.S. Department of Agriculture last week approved genetically modified apples that don’t brown when exposed to air. The approval allows trees bearing this type of fruit, called Arctic apples, to be planted on U.S. soil and, once the FDA agrees, the produce could be sold in stores within a few years.

Unlike some genetically modified foods that are manipulated by adding genes, scientists created the Arctic apple by turned off the gene that controls the browning process. Apples' color change, technically called “enzymatic browning,” occurs when oxygen reacts with an enzyme called polyphenol oxidase. Arctic apple scientists use a technique called gene silencing to turn off their apples’ polyphenol oxidase expression, which causes them to produce the chemical in amounts too small to cause browning. You can see that process unfold in this 24-hour time lapse video: http://youtu.be/g2-BqBZmVd0 The Canadian company has licensed that licensed the technique for producing these apples makes two varieties: Golden Delicious and Granny Smith. According to the Arctic apple website, preventing apples from browning removes the “yuck” sometimes associated with browned fruit. However, there’s no difference health-wise between eating a white apple and a browned apple. So, you might ask, what's the point? The apple's biggest fans might be food-service companies and restaurants, which currently rely on a chemical antioxidant called calcium ascorbate to keep sliced apples from browning. (That’s what allows places like McDonald’s to sell bags of sliced apples.) Those chemicals are expensive and entail an extra step in the process.

Okanagan Specialty Fruits developed the fruits, and the company’s CEO Neal Carter called the USDA’s approval a “milestone” and reasserted that the fruit is safe. Carter said in a statement Friday:

“All we’ve done is reduce the expression of a single enzyme; there are no novel proteins in Arctic fruit and their nutrition and composition is equivalent to their conventional counterparts.”

Studies conducted by the USDA determined that the Arctic apples are just as harmless as their conventional counterparts. And with the USDA’s approval, the Food and Drug Administration’s stamp of approval is expected to follow soon. However, it’s going to be a few years before enough trees are planted to commercially produce this new brand of apple.