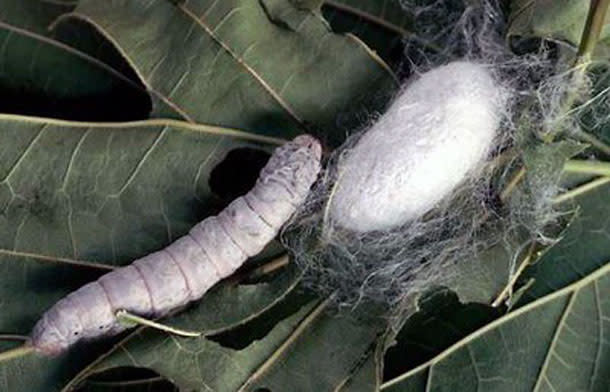 In a lab at the University of Wyoming, some silkworms are spinning cocoons of silk, just as every silkworm has done for millions of years. But these insects are special. They have been genetically engineered to spin a hybrid material that’s partly their own silk, and partly that of a spider. With spider DNA at their disposal, they can weave fibres that are unusually strong and tough. It’s the latest step in a decades-long quest to produce artificial spider silk. Spider silk is a remarkable material, wonderfully adapted for trapping, crushing, climbing and more. It is extraordinarily strong and tough, while still being elastic enough to stretch several times its original length. Indeed, the toughest biological material ever found is the record-breaking silk of the Darwin’s bark spider. It’s 10 times tougher than Kevlar, and the basis of webs that can span rivers. Because of its enticing properties, spider silk has enormous potential. It could be put to all sorts of uses, from strong sutures to artificial ligaments to body armour. That is, if only we could make enough of the stuff. Farming spiders is out of the question. They are territorial animals with a penchant for eating each other. It took 82 people, 4 years and 1 million large spiders to make a piece of cloth just 11 feet by 4 feet. The alternative is to synthesise spider silk artificially. That hasn’t been easy. Scientists have long since managed to reconstruct the proteins in the silk, using everything from bacteria to potatoes to goats. But these systems only provided small amounts of silk proteins, and would be expensive to scale up. Making silk proteins is just part of the far harder challenge of turning proteins into silk fibres, with their complex microscopic structures. To get around these problems, Donald Jarvis, Malcolm Fraser and Randolph Lewis had a simple idea: why not use another animal that also spins silk? As a large industry and centuries of history can attest to, silkworms are easy to farm in large numbers. And they’re silk-spinning machines, with massive glands that turn silk proteins into fibres. Their own silk is no mechanical slouch, and it’s already used to make sutures. But spider silk has many advantages. Not only is it stronger and tougher, but we understand how specific tweaks to a spider’s genes can produce silks with different properties. It should be possible to customise unique silks that are tailor-made for specific purposes. Fraser had just the right tool for the job. In the 1980s, he identified pieces of DNA that can hop around insect genomes, cutting themselves out of one location and pasting themselves in somewhere else. He named them PiggyBac, and he has turned them into tools for genetic engineering. You can load PIggyBac elements with the genes of your choice, and use them to insert those genes into a given genome. In this case, Florence Teulé and Yun-Gen Miao used PiggyBac to shove spider silk genes into the silk-making glands of silkworms. To identify the silkworms that had incorporated the spider genes, Teulé and Miao added another passenger to their PiggyBac vehicle – a gene for a glowing protein. The insects that had been successfully engineered all had glowing red eyes. These engineered silkworms produced composite fibres that were mostly their own silk, with just 2 to 5 percent spider silk woven among it. This tiny fraction was enough to transform the fibres. They were stronger, more elastic, and twice as tough as normal silkworm fibres. And even though they didn’t approach the strength and elasticity of true spider silk, they were almost just as tough. One other team has tried to do something similar, but their fibres didn’t show the same physical improvements. They also produced fibres where the spider silk merely coated the silkworm strands. When silkworm cocoons are harvested, these outer coats are usually removed. By contrast, Teulé and Miao’s engineered their spider genes so that the resulting silk would be woven throughout the silkworms’ own fibres. Many spider silk proteins are extremely large and most attempts to create them artificially (including this one) use smaller versions that are around a quarter of the size. When Sang Yup Lee engineered bacteria to produce spider silk, he found that the small proteins led to inferior fibres, and only the very large ones produced fibres comparable to actual spider silk. Given that Teulé and Miao have already produced reasonably strong composite fibres using the smaller version, it will be interesting to see what the larger proteins can do. The team are also planning to refine their technique to take the silkworms’ own proteins out of the equation. “The next step will be to produce silkworms that produce silk fibres consisting entirely of spider silk proteins,” says Jarvis. Perhaps they could even use the genes from the best of the silk-producers, like Darwin’s bark spider. Reference: Tuele, Miao, Sohn, Kim, Hull, Fraser, Lewis & Jarvis. 2011. Silkworms transformed with chimeric silkworm/spider silk genes spin composite silk fibers with improved mechanical properties. PNAS http://dx.doi.org/10.1073/pnas.1109420109Conflict of interest: Jarvis, Fraser and Lewis are all paid advisors to Kraig BioCraft Laboratories, Inc, the company that is commercialising the artificial silk, and that provided some of the funding for the study. The discovery was originally announced in a press conference last year, but has finally been published after a lengthy review process.