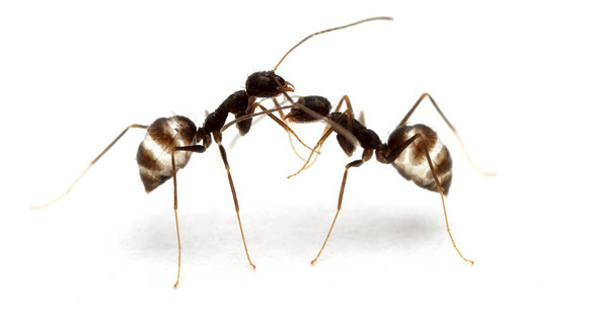 The black crazy ant has conquered the world. From its native ranges in Asia and Africa, it has spread across six continents and lives in almost 120 nations. It is arguably the most widespread ant on the planet. It spreads readily for many reasons, but Morgan Pearcy from the University of Lausanne has found a new and important one –a sexual secret behind the crazy ant’s crazy success. The black (or longhorn) crazy ant, so named for its distinctive, jerky movements, hitchhikes aboard human transport networks. Any vehicle from a jumbo jet to a cargo vessel can carry a queen to a new site, where she can set up a new colony. That’s fine for a few generations but after some time, you would expect the burgeoning invasion to run headlong into the problem of inbreeding. If all the ants in a new area are descended from a handful of queens, they could only mate with sisters and close cousins. That was bad news for European royalty, and it should be bad news for ant royalty. But Pearcy has found that the crazy ant has a special way of passing on its genes that prevents it from suffering the problems of inbreeding. With this genetic trick, it can set up a strong population from just a few individuals. It’s an ant that’s pre-adapted for conquest. Inbreeding increases the risk that individuals will be afflicted by faulty genes. They’ll inherit one copy of each gene from their mother and one from their father. If one copy doesn’t work, the other can often compensate. But if both parents are related, they might both have the same faulty version and pass on a genetic double-whammy to their offspring. In ants, these problems are even worse. For a start, only females develop from the typical fusion of sperm and egg. Males, instead, generally come from unfertilised eggs. In ants, a single set of genes determines the sex of an individual. If there’s only one copy of the set (as in an unfertilised egg), the ant becomes male. If there are two copies (as in a fertilised egg) and if they’re slightly different, the ant becomes female. To complicate matters, if ants inherit two identical copies of the sex-setting genes, they become males rather than females. This should be a very rare event, but not if a population is highly inbred and has a narrow gene pool. The problem is that these unusual males are a dead-end for the colony. They often die early, and they’re sterile. So an inbred colony has many problems. Males that only have a single set of genes will face the full brunt of any faulty ones, while those that have two copies are feeble and infertile. But this clearly isn’t a problem for the black crazy ant. It can cope because it has evolved a way of reproducing that keeps its male and female gene pools completely separate. It doesn’t suffer from the perils of inbreeding, because it doesn’t allows its genes to shuffle into a standardized mass. It’s like a painter who keeps all of her vivid hues at different corners of the palette, rather than blending them into a muddy brown at the centre. Pearcy discovered the ant’s strategy by collecting seven nests from Bangkok and analysing the DNA of their queens, workers and males. He found that the queens and males both have very distinct versions of the same genes, while workers had a mix of the two pools. By nurturing a new generation of crazy ants in the lab, Pearcy worked out why. 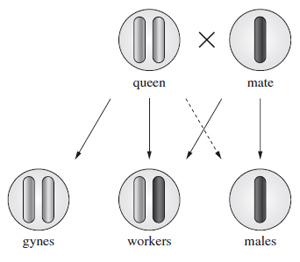 All the ants are born when a queen mates with a male, but the different castes inherit very different sets of genes from their parents. Queens only inherit the genes of their mother, so they’re clones of her. Males only inherit the genes of their father, so they’re clones of him. The workers are the only ants that inherit genes from both parents, one set from each. But because the workers never have sex, these mingled genes are never passed on. This odd pattern means that a queen is no more related to her brother than to any other ant in the nest. She got all of her genes from mum, while his genes are all hand-me-downs from dad. And this means that queens can mate with their own brothers without any harm to future generations. Ants have many other strategies to avoid inbreeding. Some colonies only produce either queens or kings, so that it’s impossible to mate with close relatives. Others stage massive mating swarms, where royalty from a number of far-flung colonies gather for sex. Again, this prevents close relatives from mating. In the case of the successful Argentine ant, queens and males mate with peers from physically separate nests. They can effectively create massive super-colonies that can stretch across countries and even between continents. But all of these strategies rely on a decent population of ants to begin with. They’re not feasible if a few individuals are left alone in a new land. That’s where the genetic trick of the black crazy ant comes in. Pearcy thinks it’s a vital part of this insect’s ability to colonise new areas. Other ants probably do the same thing. In 2005, French scientist Denis Fournier found that the little fire ant also produces males and females through cloning, and keeps their gene pools separate. It too is a notorious invader. Its skill became clear in 2009, when Sasha Mikheyev showed that a single queen was responsible for infesting Central Africa, while another individual had set up an invasion of Hawaii. In both areas, the local ants were almost entirely dominated by a single queen gene pool and a single male one. With abilities like these, it’s no wonder that ants feature five times on the list of the world’s 100 worst invasive species. Reference: Pearcy, Goodisman & Keller. 2011. Sib-mating without inbreeding in the longhorn crazy ant. Proc Roy Soc B http://dx.doi.org/10.1098/rspb.2010.2562Photo by the amazing Alex Wild More on ants: