Be it in sports or comedy, they say that timing is everything. In evolution, it's no different. Many of the innovations that have separated us from other apes may have arisen not through creating new genetic material, but by subtly shifting how the existing lot is used. 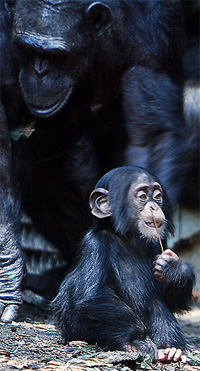 Take our brains, for example. In the brains of humans, chimps and many other mammals, the genes that are switched on in the brain change dramatically in the first few years of life. But Mehmet Somel from the Max Planck Institute for Evolutionary Anthropology has found that a small but select squad of genes, involved in the development of nerve cells, are activated much later in our brains than in those of other primates.

This genetic delay mirrors other physical shifts in timing that separate humans from other apes. Chimpanzees, for example, become sexually mature by the age of 8 or 9; we take five more years to reach the same point of development.

These delays are signs of an evolutionary process called "neoteny", where a species' growth slows down to the point where adults retain many of the features previously seen juveniles. You can see neoteny at work in some domestic dog breeds, which are remarkably similar to baby wolves, or the axolotl salamander, which keeps the gills of a larva even as it becomes a sexually mature adult. And some scientists, like the late Stephen Jay Gould, have suggested that neoteny has played a major role in human evolution too.

As adults, we share many of the physical features of immature chimps. Our bone structures, including flat faces and small jaws, are similar to those of juvenile chimps, as is our patchy distribution of hair. A slower rate of development may even have shaped our vaunted intelligence, by stretching out the time when we are most receptive to new skills and knowledge. Somel's research supports this idea by showing that since our evolutionary split from chimpanzees, the activation of some important brain genes has been delayed to the very start of adolescence.

Somel collected samples of brain matter from 39 humans, 14 chimps and 9 macaques, all of whom had recently passed away and who represented a wide range of ages. He focused on almost 8,000 genes and analysed when they became activated in a part of the brain called the dorsolateral prefrontal cortex (DLPFC). 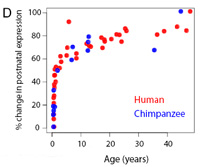 On a broad level, all three species showed similar patterns. The majority of these 8,000 genes were expressed in different ways as the animals age and most of these changes happened very early on. In both chimps and humans, half of these shifts take place within the first year of life. The same thing happens in the brains of mice, which suggests that this is a general pattern of brain development that is common to most, if not all, mammals.

But these superficial similarities mask subtler differences. Somel looked at each gene individually and focused on those that are activated differently as the brain matures; he found that half of these follow different journeys in humans compared to chimps. Some were switched on at an earlier point in time but a much higher proportion were delayed in their timing. These genes were neotenic - in the brains of humans, their use matches that of much younger chimps.

To work out the proportion of neotenic genes in the human DLPFC, Somel compared brain samples taken from 14 humans and 14 chimps, who were matched as closely as possible for both age and sex. He considered 300 genes whose timings had shifted in humans or chimps, and worked out whether each was activated earlier (accelerated) or later (neotenic) in either species. He found that the neotenic human genes were in the majority and outnumbered the other groups by a factor of two.

This isn't just a property of the DLPFC; Somel found the same pattern by looking at another part of the brain - the superior frontal gyrus - in 9 other humans, chimps and macaques. Here, the dominance of neotenic human genes was even more pronounced and they comprised half of the total sample. 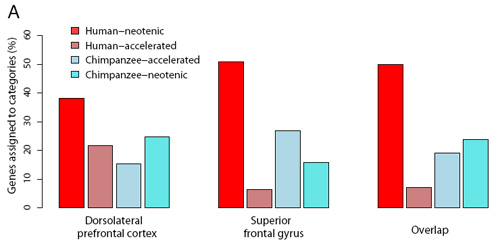 So clearly, some genes in the human brain have come to be activated at a later point in time than their counterparts in chimps. These are still in the minority - it's not the case that the development of the human brain as a whole has been drawn out. This mirrors the use of neoteny in explaining the evolution of human anatomy too - those who first proposed the idea of humans as neotenic apes applied the idea with broad brushstrokes to our entire bodies; now it's restricted to specific parts.

Finding out exactly what these genes do is the next big step. For starters, Somel has found that many of the neotenic genes are activated in our grey matter (the bodies of nerve cells, as opposed to white matter, which is the cabling that connects them).

The differences in timing between humans and chimps are particularly pronounced when we reach the start of adolescence. At this point, our brains become dramatically reorganised and our grey matter actually starts to shrink, as unused connections between neurons are trimmed in a bid for efficiency. Somel thinks that delaying the point at which this happens may have given us extra invaluable time with which to pick up knowledge and skills.

[PS I'm not sure I like the headline. For some reason, I had a total mental block about it; better suggestions welcome - Ed]