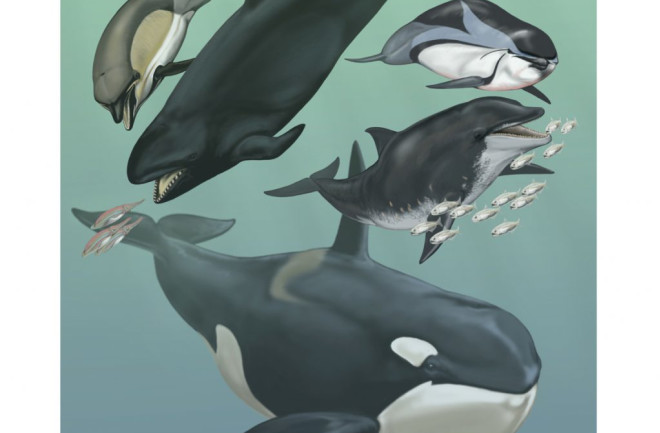 Whales, dolphins and other cetaceans underwent numerous physiological changes as they transitioned from the land to the sea. (Credit: Carl Buell, John Gatesy)

Life began in the oceans, and for hundreds of millions of years, that’s where it stayed. It took our deep ancestors eons to crawl, flop and gasp their way onto land. It turned out to be a pretty good decision, all told, as those creatures found a brand new world to inhabit. The ancient pioneers eventually led to mammals, including us — children of the land through and through.

So, it’s a bit surprising that some of us decided to go back. Around 50 million years ago during a time known as the Eocene, a select few species of mammals decided to re-submerge themselves. The largest group of these aquatic fundamentalists would become the cetaceans, which we know today as whales, dolphins and porpoises.

A new study in Science Advances winds back the genetic clock to take a look at that period 50 million years ago and find out, at the level of DNA, what kinds of changes enabled these once landlocked quadrupeds to slip back into the sea. A team of researchers from Germany and the U.S. finds 85 unique genetic losses or inactivations, many of them newly-reported, that were likely crucial to cetaceans’ transition to a fully aquatic lifestyle. Some of them help explain cetacean traits that are already well-known, while others hint at adaptations still undiscovered.

How to Live the Life Aquatic

The physiological changes that gave cetaceans access to life under the waves are already fairly well-studied. As the transitioned through semi-aquatic species like Pakicetus, the ancestors of dolphins and whales lost some of their smell and taste receptors, as well as their body hair. They got better at creating body heat and transporting oxygen in their blood, and their metabolisms changed. Feet turned to flippers. Blowholes sprouted on their backs. Their tails became powerful engines.

But the how-to guide for returning to the oceans is still far from complete. Many of the evolutionary changes cetaceans went through are little-understood, especially at the genetic level.

To dive deeper into the question, the team compiled a list of protein-coding genes in humans, who, as mammals, still share many genes with cetaceans. Then they looked for known mutations that would turn genes off, meaning they could no longer make whatever they were meant to. Once they had these, they narrowed the search down to genes that were turned off in cetaceans, but not hippopotamuses, their closest ancestors on land. Finding a gene inactivated in cetaceans but not hippos was a strong hint that the genetic loss was a result of, or led to, cetaceans becoming fully aquatic. They then looked at previously-published studies of gene function to see what these genes did.

In all, they found 85 genes that cetaceans lost right around 50 million years ago as they began to become fully aquatic, 62 of which had never been reported before. Some of the gene losses simply removed things that were no longer necessary, while others granted them new abilities by altering key bodily functions. Most of the genes were probably lost through a process called relaxed selection, the authors say, something perhaps better termed “use or lose it.” When there’s no advantage to having a gene, it’s much more likely that random mutations will break or alter it.

Things We Lost in the Ocean

Some of the finds help explain things that scientists already knew set whales and their cousins apart. When whales dive deep, their lungs partially collapse under the pressure, and when they return to their surface, they must out and then in quickly, a process termed “explosive exhalation.” One of the gene inactivations the researchers discovered helps their lungs remain elastic, allowing for the kind of rapid deformations that would leave our lungs scarred and useless.

Another gene they found turned off was responsible for saliva production. Saliva isn’t very helpful when there’s water everywhere to moisten your food, and might actually lead to dehydration. That gene was also related to salt reabsorption in the kidneys, another function no longer necessary in the salty ocean.

Other gene losses help cetaceans constrict their blood vessels when they dive and reduce their blood’s abilities to form clots. Another promotes higher levels of antioxidants in their bloodstreams to help deal with the stresses of deep diving.

Cetaceans also lost three key genes that allow our bodies to make melatonin, a hormone that regulates our circadian rhythms. Because whales and dolphins must regularly surface to breathe, they don’t have the luxury of a solid eight hours of sleep every night. They’ve adapted by sleeping one brain hemisphere at a time, leaving the other to keep them swimming and breathing. Circadian rhythms have little place under the sea.

The researchers uncovered a number of genes that hint at previously-undiscovered adaptions as well. This includes changes to cetaceans immune systems, gut microbiome and metabolism, and it hints that scientists still don’t completely understand the myriad adaptations that allowed mammals back into the sea. In addition, there were a number of genes whose functions weren’t well-known, offering still more avenues for research.

The work is edging scientists closer to a complete understanding of a quixotic moment in the history of life. Animals that once roamed the land returned to the primeval oceans, dipping back into a frontier they’d long-abandoned. To do so, they gave up much of what they once had. But, what they gained was perhaps even greater.