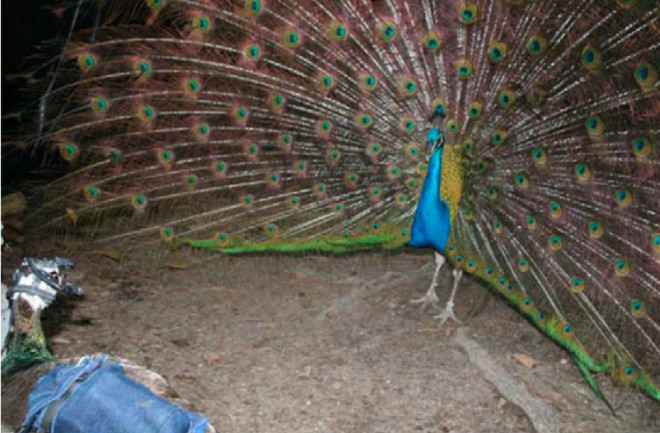 Peacock strutting his stuff for a female in the study. Image credit: Jessica L. Yorzinski et al. /Journal of Experimental Biology The peacock is the epitome of over-the-top displays used to attract the ladies, and has long been touted as the classic example of sexual selection in action. But new research suggests that peahens make their mate choices without paying much attention to males' flashy tails. Darwin suggested species like peafowl evolved such outlandish ornamentation through the process of sexual selection, by which female taste influenced the evolution of male appearance. In order to mate with a female, the male must to grab her attention and hold onto it long enough to do the deed. The most successful males, then, were thought to be the most decorated, suggesting that female preference could direct the evolution of the male appearance. That theory has held for the last century and a half, but was never really demonstrated, because who really knows what's going on inside the brain of a peahen?

Researchers at Duke University and UC Davis wanted to find out, so they equipped a dozen peahens (females of the species Pavo cristatus) with some ridiculous-looking wireless eye-tracking contraptions to see the world through their beady bird eyes. When allowed to meander in an open area with members of the opposite sex, the females surprisingly did not actually pay much attention to the males' glamorous feathers. The peahens spent more time looking at their surroundings than they did at the males trying to impress them. "Given that females spent less than one-third of their time gazing at the displaying male, it is not surprising that females often appear to human observers as coy and uninterested in males," write the study's authors in the Journal of Experimental Biology.

Pretty peahen wearing wireless eye-tracker. Image credit: Jessica L. Yorzinski et al./ Journal of Experimental Biology And when the females did scan the males, they focused almost exclusively on the lowermost feathers near the ground. The researchers say peahens "virtually ignore other, highly conspicuous components" like the enormous colorful fan---although rattling and shaking said fan did seem to pique the ladies' interest. Still, the females hardly looked up at the enormous green feathers unless the male was too far away for her to see his lower train, or if those lowermost feathers were obscured by vegetation.

The researchers think the female's focus may gravitate down so she can assess the symmetry and size of the bird's spread, the latter being an indication of age and perhaps sexual maturity. This study is momentous for two reasons. One, it was "the first measurements of eye movements in any freely moving bird." Pretty snazzy. And two, if peacocks' dance moves and lower feathers are what actually attract the females, rather than their enormous upper trains, sexual selection in this species may not be as straightforward as Darwin thought.