From the Vault: An Inordinate Fondness for Beetle Horns 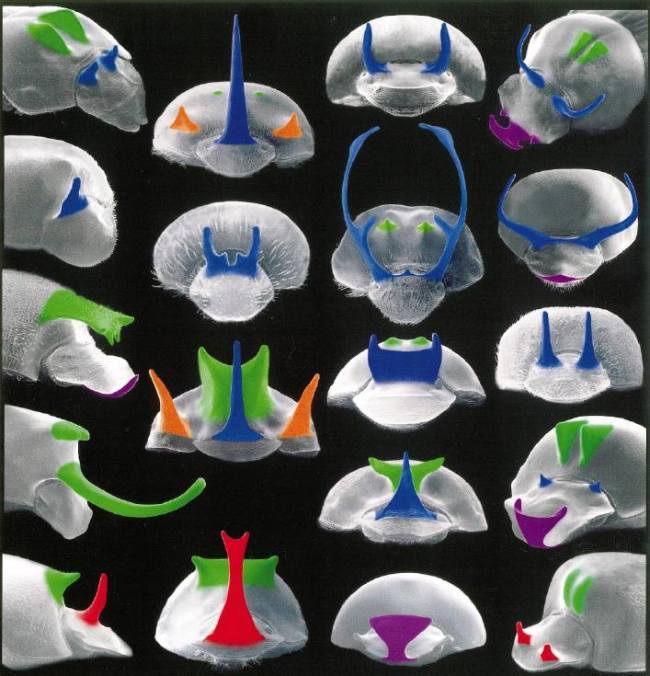 It’s strange enough that beetles grow horns. But it’s especially strange that beetles grow so many kinds of horns. This picture, which was published in the latest issue of the journal Evolution, shows a tiny sampling of this diversity. The species shown here all belong to the genus Onthophagus, a group of dung beetles. The colors in this picture, which are false, show which parts of the beetle body the horns grow from. Blue horns grow from the back of the head, red from the middle of the head, and purple from the front of the head. Green horns grow from the center of the body plate directly behind the head (the pronotum), and orange horns grow from the side of the pronotum. These beetles can grow horns big and small, single or multiple, shaped like stags or like rhinos. And, as these colors show, the beetles can take very different developmental paths to get to their finished product. The biologist JBS Haldane was supposedly asked once if he could say anything about God from his study of nature. Haldane replied He must have an inordinate fondness for beetles. Add to that a fondness for putting horns on those beetles. A century before Haldane, Charles Darwin was fascinated by the horns of these beetles. He proposed that they were produced through sexual selection. Natural selection was based on how traits helped an organism survive and have offspring—staying warm in winter, fighting off diseases, and so on. Sexual selection was based on the struggle to have sex. If females preferred to mate with males with certain traits (big tails in peacocks, for example), the males would gradually evolve more and more elaborate versions of that trait. Males might also fight with other males to get access to females, and here too their struggle could lead to baroque anatomy—such as beetle horns. Modern evolutionary biologists have followed up on Darwin’s suggestion, and have made a close study of beetle horns. There are thousands upon thousands of species with horns to compare, and scientists can observe how the horns develop and are used by the males. A lot of fascinating work has been published on beetle horns, such the work I described in this post. The picture I’ve shown here comes from a paper that represents a big step forward in understanding this explosion of diversity. Douglas Emlen of the University of Montana and his colleagues have, for the first time, reconstructed some of the evolutionary history that produced this embarrassment of horns. (You can download the paper for free here on Emlen’s web site.) Emlen and his colleagues focused their attention on Onthophagus dung beetles. These beetles, which are found all over the world, search out dung and then dig a tunnel underneath it. The female beetles then make a ball of the dung and lay eggs in it. The male beetles will guard the opening of these tunnels and fight off any males that try to get in and mate with the female inside. It’s here the horns come in handy, helping a guarding male make it impossible for other males to get past them. The scientists extracted DNA from 48 different species of Onthophagus and used the sequence to figure out their evolutionary relationships. They then reconstructed the changes that evolved in the horns as new species arose. And finally, the researchers looked at the natural history of the animals—where they lived, how they lived, and the like. It turns out that beetle horns have changed a lot. Judging from the species that sit on the oldest branches of the tree, the scientists concluded that the common ancestor of these 48 beetle species had a single horn growing from the base of the head (the second from the top on the left hand side of the photo may bear a resemblance). As new species arose, they tended to grow bigger horns, and they also tended to grow horns from new parts of their bodies. On the other hand, sometimes a lineage with elaborate horns gave rise to species with much smaller ones. Sometimes one horn became two which became one. This chart shows the tortuous paths that evolution has taken in these beetles. (The thickness of the arrows shows how often these transformations took place in different lineages.) Given that the researchers analyzed only 48 out of the 2000 Onthophagus species, the true scale of change is probably far greater. 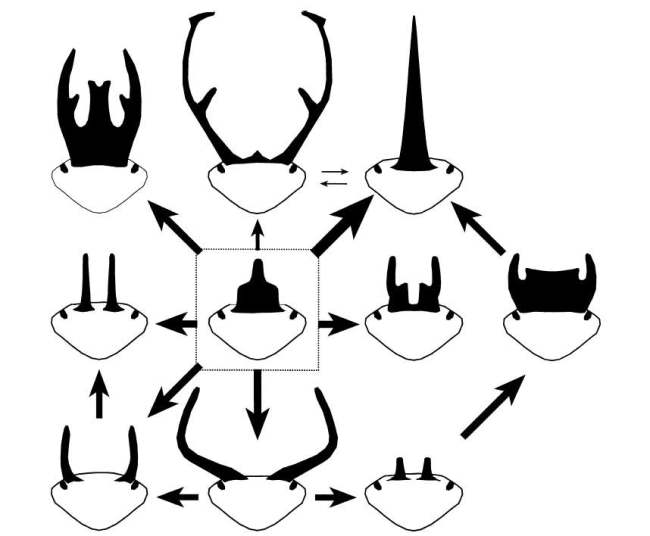 Emlen and his collagues argue that sexual selection has driven the horns of these beetles to outrageous lengths. If you’re a male dung beetle and you want pry another male out of his tunnel, it helps to have a longer horn. If you’re that male in the tunnel, your own chances of victory depend on the horn too. So it’s the males with bigger horns that are most likely to win. And yet, as this beetle flow chart shows, these insects have lost their weaponry in some lineages. What is the countervailing force in beetle evolution? Horns, the scientists point out, are expensive. It takes a lot of energy and the dedication of large swaths of a beetle’s body to grow horns. When you’re talking about horns that can get longer than a beetle’s entire body, the costs can be huge. In fact, growing bigger horns means that beetles have to reduce the size of other organs. Experiments have shown that the growth of horns can reduce the size of beetle eyes by 30%. The researchers proposed that growing horns would force a trade-off with other important parts of the body, such as eyes and antennae. And the beetle tree supports their proposal. It is harder for beetles to detect the odor of dung with their antennae in a pasture than in a forest, because the odor plumes last longer in the woods. Four out of the five gains of new horns took place in forests—perhaps because beetles could afford to grow smaller antennae in a place where smelling wasn’t so hard. On the flip side, in seven of the nine cases in which horns were lost, the beetles became nocturnal. Beetles that fly at night need larger eyes, and so they can’t afford to shunt resources to big horns any more. The pressure to evolve bigger horns still exists in these lineages, but it’s been offset by other demands. Emlen's study is a nice reminder that we don't have to stand back, slack-jawed, at nature's diversity. When you look at a line-up of beetle horns like the one at the beginning of this post, they can seem like an impenetrable mystery. But understanding of how these beetles live, and how they evolved from a common ancestor, makes them less mysterious. But no less marvelous.