From the Brink of Extinction, Some Frogs Defy the Odds 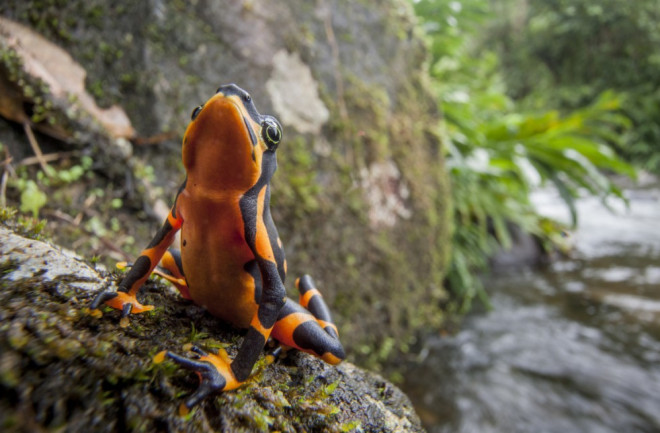 The Variable Harlequin Frog is just one of the so-called Lazarus frogs rediscovered in recent years. In 2003, two young biology students called Justin Yeager and Mark Pepper were in Costa Rica studying poison dart frogs when their guide presented them with a pair of beautiful orange-yellow and black frogs. They were left speechless, because in front of them was a species that was no longer meant to exist. The Variable Harlequin Frog, Atelopus varius, had disappeared from cool streams across Costa Rica and Panama in the early 1990s, leaving not even a corpse to mark its existence. Its vanishing, alongside myriad other frogs including the famed golden toad, was later attributed to the wave-like spread of a pandemic pathogen – a fungus responsible for the greatest disease-driven loss of biodiversity in our times – against a backdrop of a changing climate and dwindling and damaged habitats. In the wake of such carnage, was the variable harlequin frog a lone survivor? Could it increase our understanding of the current mass extinction and help us stem the hemorrhaging of life from our planet? The harlequin frog, it would turn out, was not alone. Five years after its rediscovery herpetologist Robert Puschendorf was crashing through the dry forests of north Australia when he found a small population of Armored Mist Frog, Litoria lorica, living with the very same chytrid fungus that was believed to have wiped it out 17 years previously. The following year in New South Wales the Yellow-spotted Bell Frog, Litoria castanea, hopped back to life after 30 years without trace. Back in the Americas, Lazarus frogs were reappearing in Ecuador, Venezuela, Colombia and Costa Rica, years and even decades after they were thought to have been wiped out.

The Macaya Breast-spot Frog, one of the smallest in the world, was rediscovered in 2010.

Frogs Brought Back From the Brink

What set these survivors apart from those that succumbed around them? In a bid to find out, in August 2010 I spearheaded a global hunt for lost amphibians. As director of the amphibian program at Conservation International and the IUCN Amphibian Specialist Group I was uniquely placed to compile a list of lost species and coordinate more than thirty teams as they dispatched in 21 countries to search for lost species. While most returned empty-handed and crestfallen, a handful came back with remarkable stories of discovery and rediscovery. In Haiti we found six frog species that had not been seen in two decades in a small patch of remote cloud forest – emblems of hope in a ravaged land. In Borneo the Borneo Rainbow Toad appeared after 87 years, and in Ecuador the Rio Pescado Stubfoot Toad was found after 15 years without trace. In Israel the Hula Painted Frog came back to life upon the restoration of its wetland home, 55 years after it was last seen, transforming it instantly from a national symbol of extinction to a totem of hope. Every Lazarus frog that reappeared carried with it a fascinating story and presented us with an opportunity to understand a little more about the current mass extinction event. The Armored Mistfrog was raising its body temperature by basking to stave off lethal infection from the fungus – a finding that could help us target future searches for lost species and manage habitats to give the frogs a fighting chance against infection. Survivors of the Mountain Yellow-legged Frog of California were found to be enlisting the help of beneficial bacteria to fight infection, prompting scientists to try augmenting the skin of frogs to boost their bacteria load in the face of infection.

A researcher swabs a frog to test for the presence of the amphibian chytrid fungus.

Probiotic therapy with beneficial bacteria presents one of the most promising lines of research in tackling the chytrid fungus in the wild – and one island nation is poised to become a living laboratory to test its effectiveness. Until last year Madagascar, the world’s fourth largest island and home to over 500 species of frogs found nowhere else, was free from the chytrid fungus. Its recent detection on wild frogs has raised the threat level there to orange. Molly Bletz, a doctoral student at the Technische Universität Braunschweig, in collaboration with Dr. Reid Harris, International Disease Director for the Amphibian Survival Alliance, is furiously developing a library of beneficial bacteria for the frogs of Madagascar, such as the brilliant, iconic and rare golden mantella, in the event that the fungus proves to be fatal. To date, 3500 bacterial isolates from 120 frog species in Madagascar have been analyzed for their ability to inhibit Bd, and promising inhibitory isolates have been found. The next step is to determine which probiotic candidates will successfully colonize and persist on Malagasy frogs. Bletz is planning trials at the Paris Zoo in early 2015. After these trials, inhibitory isolates that persist on Malagasy frogs will be used in clinical trials in the laboratory to see if probiotic treatment will protect them from the chytrid fungus. The probiotic can be applied to frogs in baths or potentially through environmental inoculation of soil and water, which has been successful in laboratory trials and is widely done in agricultural and aquacultural contexts. (Though it's important to note that only locally-occurring bacteria are used to augment protective bacteria on vulnerable frog species.)

La Hotte Glanded Frog, was last seen in Haiti in 1991 until it was rediscovered in 2010.

Many questions remain regarding our ability to stem the impact of the chytrid fungus, one of the greatest threats to global biodiversity of our times. The Search for Lost Frogs helped us to understand a little more about the global status of amphibians and uncovered missing species that may hold vital clues. But it also achieved something else beyond the science. Rediscovered frogs and salamanders became beacons of hope in an oftentimes bleak landscape, a welcome reminder that nature can, if given a chance, still surprise us. Lazarus frogs achieved celebrity status by the simple expedience of survival, ascending to icons of hope and instilling a sense of local and national pride. The frogs, unlikely flagships for conservation, gave us something to rally behind and reminded us what it is we are working towards. Amphibians remain the most threatened group of vertebrates, with around a half of all species at risk of extinction, but with the current wave of rediscoveries we have been given a second chance to save these and other species. Perhaps it is time to think outside the panda, to value and protect the too often forgotten and maligned creatures, for our world is a richer, more wondrous place for them. All images by Robin MooreDelve deeper into the Search for Lost Frogs in Robin’s new book, In Search of Lost Frogs.