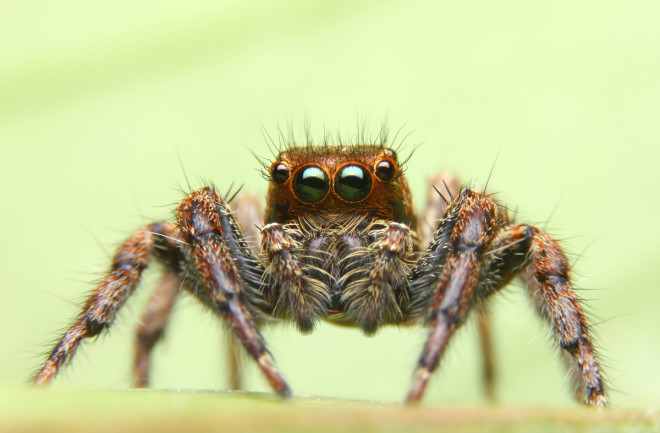 C'mon, you're not really afraid of this cute little guy, are ya? Photo Credit: Plamuekwhan/Shutterstock Few groups of animals are as feared as spiders. Doctors estimate at least 5% of people are arachnophobic, meaning they are terrified of the eight-legged critters. But such fear is largely misplaced. Of the nearly 47,000 species of spider on the planet, only 200 or so can actually bite through our tough skin and deliver venom that causes any kind of reaction. And of those, only a few are considered truly dangerous. Rather than fearing them, we should be in awe of just how incredibly diverse, successful, and unique these animals are. But turning fear into fascination is no easy feat. Hopefully, a new paper in PeerJ can help.Stefano Mammola and his colleagues have meticulously summarized these octo-appendaged wonders, documenting dozens of incredible facets of their diverse anatomies, behaviors, and lifestyles. There are so many spiders out there, and they are everywhere. "They are considered to be one of the most successful groups of organisms in terms of their long evolutionary history and diverse ecological impacts," the authors explain. "They are distributed in virtually all terrestrial ecosystems and play a key role as generalist carnivorous predators." To become such global dominators, spiders have diversified into many forms, which are summarized in the paper's first figure:

General anatomy of a spider and variation in body forms. Figure 1 from Mammola et al. 2017 From black widows to tarantulas, Mammola and his colleagues cover more than 100 different 'Spider World Records'. Here are just a few of them.

The tradition of identifying organisms using binomial nomenclature—the two names that identify an animal to its genus and species—dates back to the 18th century. But while they are traditionally Latin, genus and species names have become as diverse and bizarre as the species themselves. According to Mammola et al., the longest of these names belongs to Acanthoscurria hirsutissimasterni, an Argentinian tarantula described by Gunter Schmidt in 2007. With 33 characters to its name, it narrowly beats several other spider species for the title.

Most people fear spider bites, but the Scytodidae aren't known for biting. The family is commonly called the spitting spiders, for an obvious reason: they spit. Their venom glands are unusually large and produce a sticky venom-silk mix which they shoot in a zig zag pattern at speeds in excess of 28 meters per second. The odd substance glues their targets in place from a distance. While the venom contains toxins like metalloproteases, it's unclear whether the gluey mix acts toxically when applied externally, or if the spat mixture is just used to ensnare.

A close-up of a spitting spider. Photo Credit: ex0rzist/Shutterstock

Most spiders are considered generalist predators, although there are some with peculiar diets. Mammola et al. have given the dubious honor of "fussiest spider" to a species with a macabre diet: the East African jumping spider, Evarcha culicivora. These small spiders have a taste for vertebrate blood, but they don't have the mouthparts to pull off vampirism. So instead, they feast on female Anopheles mosquitoes. Their consumption of blood isn't accidental—they are able to tell blood-fed mosquitoes apart from other mosquitoes and similarly-sized potential prey. Given their unique tastes, scientists wonder if they might prove useful as a biological control agent to reduce the prevalence of mosquito-spread malaria.

Spiders aren't exactly known for their noises, but at least 26 different families are known to produce sounds. These noises are generally made by rubbing body parts together (called stridulation) or hitting the ground (called percussion). Some spiders use sounds to scare off predators, while others use them in heated battles over females. And some even make sweet love songs meant to woo their females' little spidery hearts. Many of these sounds are too quiet for our ears, but there are notable exceptions, including the peacock spider Maratus michaelseni. To convince females of their vigor, males will stridulate, producing sounds that can be heard from several meters away. Like other peacock spiders, they're also great dancers. https://www.youtube.com/watch?v=xYIUFEQeh3g

While song loudness might get you noticed, it's complexity that gets you laid—at least if you're a Habronattus coeacatus jumping spider. Native to the US, Mexico and Caribbean, these cute little spiders court females using impressive dancing and vibratory songs. These songs can contain up to 20 different elements organized in functional motifs—incredibly complex music for a tiny little spider. But don't be too quick to hand over the medal. Lots of jumping spiders have complicated courtship rituals, and only a few have been adequately studied.

Spiders, like many other invertebrates, aren't huge fans of cold weather. But that doesn't stop them from surviving in the coldest inhabited place on Earth: the town of Oymyakon in Eastern Yakutia, Russia. The town set the world record for low temperature with an absolute minimal temperature of –71.2 °C in 1924. Yet at least 55 species of spider live in Oymyakon and the surrounding landscape, including ground spiders (Gnaphosidae), wolf spiders (Lycosidae) and dwarf spiders (Linyphiidae).

Well, ok. Mammola and his colleagues admit that taste is a matter of personal preference. But there are spider species that are considered delicacies in local cuisine. People in Cambodia and Thailand like to eat a kind of tarantula appropriately known as "the edible spider" (Haplopelma albostriatum) fried as a street food (they also enjoy them canned with salt). And in Venezuela, members of the Piaroa tribe snack on roasted goliath birdeaters (Theraphosa blondi)—which, yes, sometimes eat adult birds, though their diets are largely made up of other bugs.

Like all other species on this planet, spider species are threatened by invasive species, habitat destruction, pollution, and climate change. Sadly, there isn't a single "most endangered" spider—36 species are listed as critically endangered on the IUCN's most recent red list. Loss of living space is the most common driver of their sudden rarity, although some of the tarantulas are also pressured by the pet trade. But even this number, which seems high, is likely a gross underestimate of the real number of spider species on the brink of extinction. Only 199 species, less than 1% of the known species of spider, have even been evaluated against the red list criteria. So it's likely that many, many, many more spiders are in imminent danger, and some may have even disappeared without us even knowing they existed—all the more reason to appreciate the ones we still have.