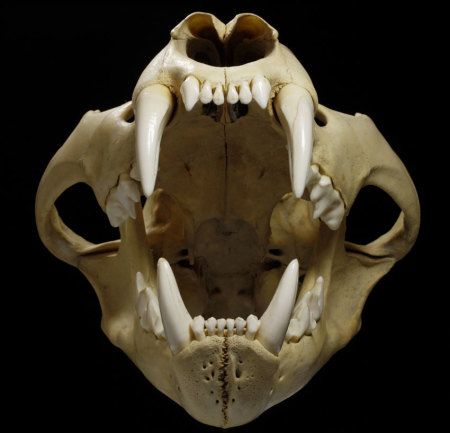 There are 206 bones in the human body--one more than a horse, and a hundred or so fewer than a mouse. Yet one reigns supreme in matters of mystery and symbolism: the skull. Our fascination probably began millennia ago. Compared with other body parts, a disproportionately large number of skulls are found in archaeological sites. Many anthropologists surmise that early humans, in frequent times of famine, practiced cannibalism and accorded varying significance to the parts consumed. Thighs and forearms were most likely eaten with relish and abandon, but skulls were revered. Their markings and burial settings suggest they were used in rituals, and this special treatment preserved them for thousands of years while other bones disintegrated. Why the captivation with skulls? The eyeless sockets, firm jaw, and teeth in the rictus of an eternal grin--the skull is ghostlike and terrifying, but still recognizably animal. It represents the soul and reminds us of the inescapable fate we will all face.

One of the most expansive private skull collections in the world, containing more than 2,000 specimens, is tucked improbably into a spare bedroom in a small house in England. It belongs to amateur taxidermist Alan Dudley, whose hobby began as a teenager when he found a dead fox and decided to study it. He took off its fur with a knife and tweezers and got his first good look at a whole skull, magnificent in its purity and perfection. He began gathering more skulls from zoos, collectors, and anywhere else he could find them. Over the years--as his single fox was joined by a bat, a newt, an anteater, a cuckoo, and so on--Dudley became widely renowned for his collection. These pages showcase some of his most intriguing specimens.

A lion's bite can exert 1,000 pounds of force, allowing it to crack the skulls of large mammals easily. Lions are internally very similar to tigers. Their skulls are all but indistinguishable, though lions tend to top out at around 500 pounds of body weight, while tigers can exceed 600. 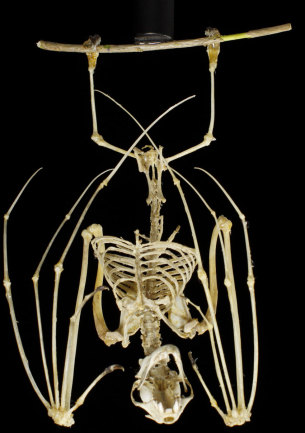 Most small bats use echolocation to navigate, but the distinctively large orbits of this Southeast Asian bat betray that it uses sight to find its way. Larger eyes allow more light to come in, making for better vision. As its name suggests, this bat prefers fruit, which it finds using a keen sense of smell. Sharp teeth and a powerful jaw allow it to pierce tough fruit rinds. 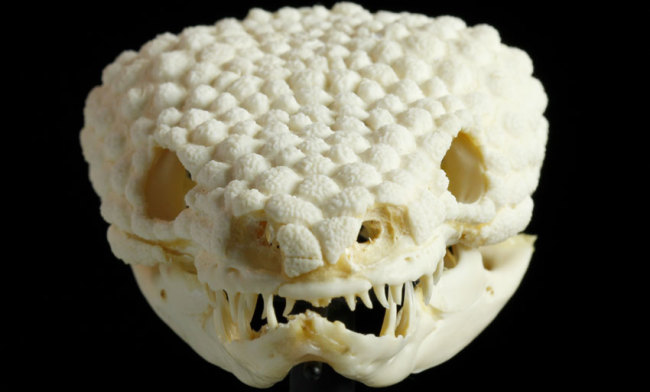 The Gila monster is a squat, slow-moving lizard with a bite that releases venom from glands in its lower jaw. Small grooves within needlelike teeth aid the flow of poison into the victim, slowing down prey and stopping predators. The Gila usually eats less than once a month; when it does, it tends to devour prey--lizards, frogs, and birds--in one gulp. The knobs on its skull, also found on crocodiles, thicken the bone, probably for protection. 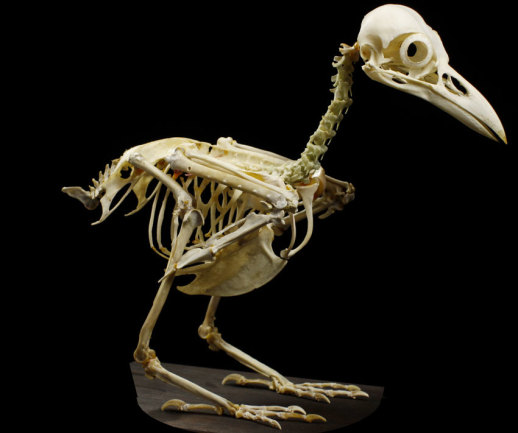 Crows are known for remarkable intelligence. The Caledonian crow rivals chimpanzees in tool use by employing sticks and leaf stems to extract insects from crevices. But all crows have a large brain-to-body size ratio, which may explain the carrion crow's cosmopolitan success. It eats other birds, worms, and bird eggs

The bullfrog's skull is fragile, partly due to the large holes for the eyes (which are retracted during swallowing, possibly to help push food back toward the esophagus). Its mouth is immensely out of proportion to provide the best chance of netting a meal. The mandible is toothless--frogs tend to swallow prey whole--but the upper jaw has rows of tiny teeth used to grasp. 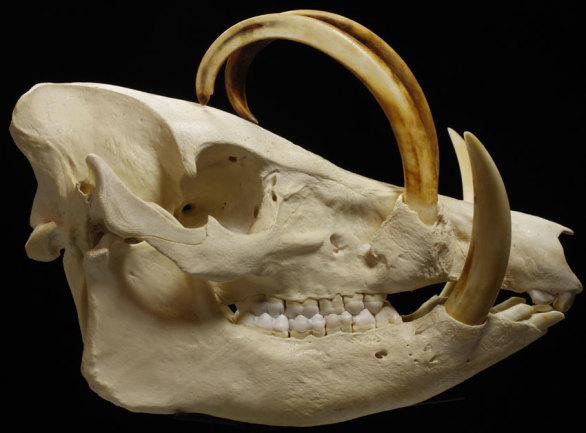 An Indonesian swine, the male babirusa has prodigious tusks--formed from upward-growing canine teeth--that resemble antlers. (Babirusa means "pig-deer.") The animal's large lower canines resemble those of warthogs. The jungle-dwelling babirusa is generally docile; its tusks are most likely used to fight off mating competition. 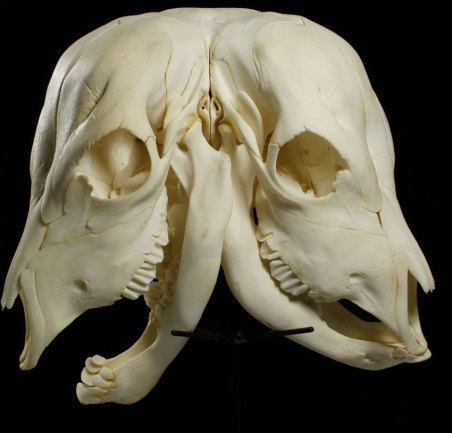 These rare, fused skulls belonged to conjoined twins born with a condition known as polycephaly. They shared a body and one opening where the spinal cord connected to the head. The skulls sat in a zoo freezer for more than a decade before joining Dudley's collection.

The king penguin regularly dives to depths of 650 feet on fishing expeditions. Its long, slender skull and bill are perfectly adapted to its aquatic lifestyle. The penguin's streamlined features allow it to swim as fast as 6 feet per second. Dense bones reduce buoyancy, helping the bird sink far enough to catch fish and squid. 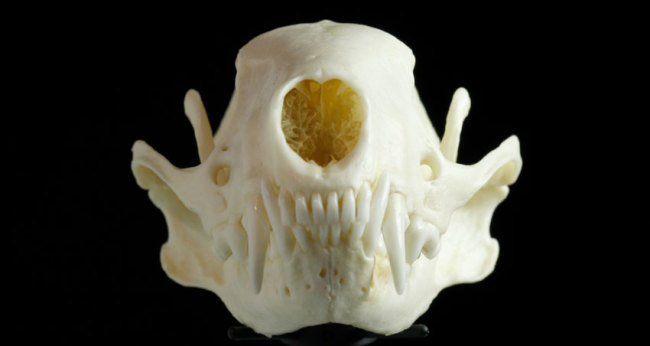 The much-maligned striped skunk, found only in North America, lives on a diet of insects, small mammals, snails, and fruits. The skull of this nocturnal scavenger shows the typical dentition of an omnivore. Like humans, skunks have front teeth adapted for seizing and tearing, while molars in back specialize in grinding and chewing. 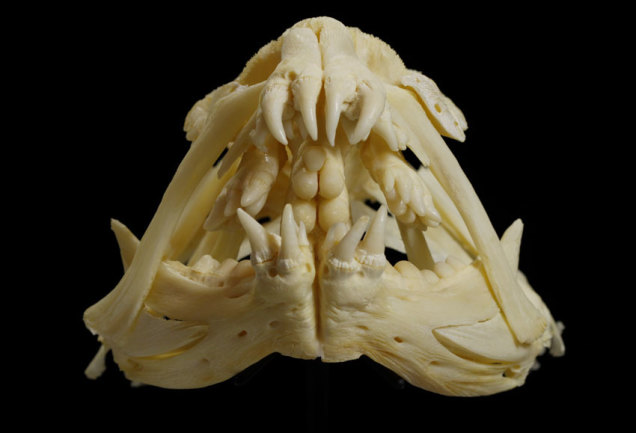 The fierce-looking wolffish eats hard-shelled mollusks, crabs, and urchins. In its mouth are bones for crushing these well-protected morsels; sharp teeth around the mouth's edge grip and tear victims. A robust bone structure supports the strong jaw muscles used in grappling prey.