From 440 to 25,000: One Humpback Whale Population’s Amazing Recovery 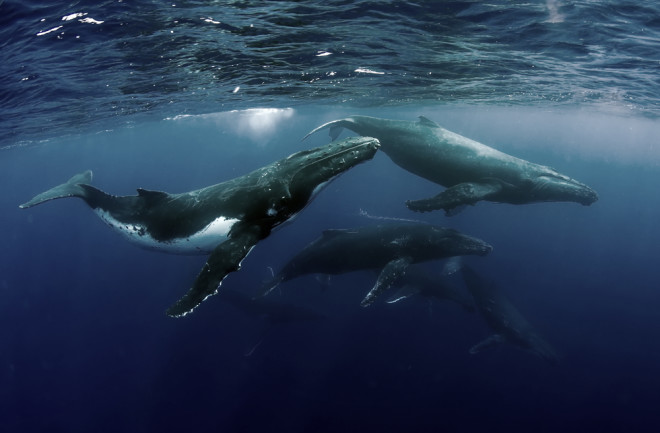 Humpback whale populations have recovered since whaling was banned, some from near extinction. (Credit: Tomas Kotouc/Shutterstock)

In the late 1950s, only 440 humpback whales — or 1.6 percent of their onetime number — were swimming around the southwestern Atlantic Ocean. Thanks to whaling restrictions, these school bus-sized aquatic mammals have started to come back.

Now, a new paper estimates that the western South Atlantic whales have recovered even better than scientists previously thought. The massive cetaceans are 93 percent of the way to their pre-hunting population levels, the researchers say.

Their return is proof that some of the damage we have inflicted on the natural environment can be reversed, says Alexandre Zerbini, a coauthor on the Royal Society Open Science paper and marine mammals researcher with the National Oceanic and Atmospheric Administration. “It’s good to know that even though we as human beings almost killed them all, that once we left them alone, they grew back,” he says.

Humpback whales form what the International Whaling Commission classifies as 10 different breeding groups. The IWC, an international agency responsible for whale protection and whaling management, last assessed the western South Atlantic breeding group in the mid-2000s. That report said these humpbacks had only recovered to 30 percent of their original population size, but this new assessment uses better and more recent data, Zerbini says, who is also a member of the organization.

First, the research team recalculated how large the group was before any widespread hunting. The former report left out whales killed before the early 1900s, or before hunting became a commercial practice. Though most humpback deaths happened in this era, Zerbini and his team searched records from before the turn of the century and found hunters killed between 20,000 and 40,000 humpbacks. The team also included estimates of calves lost because their mothers were hunted, as well as whales killed but never brought to shore.

The team also estimated a higher number of currently living whales by incorporating data from boat surveys. The last report used data from flyover counting missions, which moved so fast it was likely observers missed some whales, Zerbini says. Boats move slowly enough that even whales taking their time coming up for air get counted.

Zerbini and his colleagues ended with a peak population estimate of between about 23,000 and 34,000 whales in 1830. Whaling brought their numbers down, but now that humpback whales aren’t hunted, about 25,000 swim in their region of the Atlantic today. The team thinks the population could hit 99 percent of their historic levels by 2030.

To get there, deaths by ship strikes and net entanglement cannot become more common than they already are, Zerbini says. Those threats are minor for this population, but “we need to ensure we maintain the levels of protection we have for whales now, and minimize human-induced mortality,” he says.

Not every whale population is doing as well as these humpbacks. Minke whales in the North Atlantic are still hunted in Norway, and Japan recently resumed commercial whaling. While it’s exciting to see humpbacks improving, those other currently-exploited species are what the IWC was formed to protect, Zerbini says.

But looking at the success of humpback whales over the past decades offers encouragement. “If you manage natural resources well, they will survive,” he says.