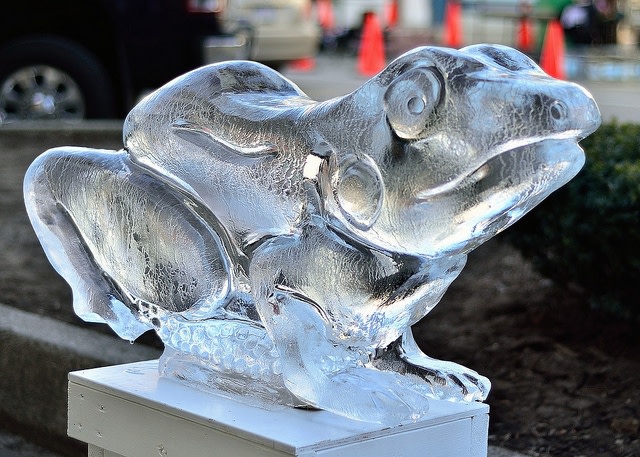 No matter how rough a winter you think you had, it was nothing compared to what a wood frog survives every year. Some of these little amphibians are still waiting for spring, when they'll thaw out and turn from frog-shaped blocks of ice back into animals. Recently, scientists took a close look at wood frogs living deep in the Alaskan woods and learned that they're even more impressive than we'd imagined. Wood frogs (Lithobates sylvaticus) are known for their skill—more like a superpower, really, in the animal world—of freezing solid for the winter. Forget migrating to warmer climes or hibernating in caves: they hunker down and let the ice take them. It crackles through their thumb-sized brown bodies, freezing the skin, the blood, the brain. This would kill most animals easily. But come spring, the wood frog reanimates itself and hops off to breed like nothing ever happened. Most research on this species has looked at frogs from the Midwest or southern Canada. It's been reported that temperatures below –7°Celsius (about 20°F) can kill the frogs. A laboratory study found that being frozen for more than 2 months is often fatal. Yet the frogs' range extends into the Arctic Circle in Alaska and Canada. Even below the Arctic Circle, their habitat in Alaska can remain below freezing for half the year, and temperatures can reach –20°C. Does winter here wipe out large numbers of wood frogs—or are they hardier than we think? Don Larson, a PhD student at the University of Alaska, Fairbanks, studied wood frogs both in the lab and the Alaskan forests to look for the answer. Larson and his coauthors found 18 wood frogs that were preparing for winter and put temperature sensors into their hiding places. They held other frogs in outdoor enclosures or brought them into the lab to be frozen artificially. (Video taken of the enclosure frogs, below, showed that the animals create holes for themselves under the leaf litter by spinning in circles—like a dog settling down for a nap. If uncovered by a scientist, the frogs dug back down until they were hidden again.) Frogs in the wild stayed frozen for an average of 193 days. During this time, sensors showed that the temperature in their habitats averaged –6.3°C (21°F). At some points, temperatures dropped as low as –18.1°C, or just below 0 Fahrenheit. Despite the conditions, which were worse than anything recorded for wood frogs before, every frog survived. Their secret may be the key to any good popsicle: sugar. Wood frogs use the simple sugar molecule glucose, Larson explains, to protect their cells while their bodies are freezing. Packing their tissues with glucose keeps them from drying out too much while ice is crystallizing around their cells. It also prevents any ice from forming within the cells themselves—which is "always lethal," Larson says. Compared to frogs that were frozen in the lab, wood frogs frozen outdoors had more than 10 times as much glucose in some of their tissues. This may be because as fall turned into winter, the temperature repeatedly fell below freezing and warmed up again. Frogs pump out glucose as soon as they notice themselves starting to freeze. In the lab, they only had one chance to do this as scientists turned down the temperature. But in the wild, each early cycle of freezing and thawing sent more glucose through their bodies. While glucose protects cells at the moment of freezing, antifreeze chemicals might help protect frogs from the long-term side effects of being an ice cube. Larson found a molecule called antifreeze glycolipid (AFGL) in wood frogs' tissues. He explains that AFGL sits on the outsides of cells and attaches to ice crystals as they form. It seems to prevent ice from sneaking across the cell membrane into the cell itself. AFGLs "have been found in insects, plants, and one other frog species," Larson says. These antifreeze molecules "are one more piece of the puzzle" of how wood frogs survive freezing so well, Larson says. The frogs in his study froze longer and deeper than scientists had ever seen before—yet every single one of them woke up in the spring, unscathed. For this reason, Larson suspects they can survive even worse. "The limits," he says, "have not even been touched yet."

Image: by Cliff Muller, via Flickr (not a wood frog)

Video: University of Alaska Museum of the North.