Frog Species Are Hopping Into Extinction Before They’re Even Discovered 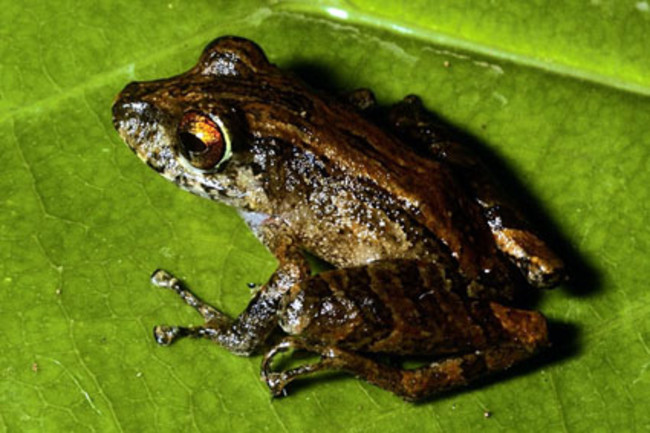 Andrew Crawford and his colleagues discovered 11 new species of amphibians in Panama. But they wish it hadn't happened this way. The team just completed a long-term study of amphibians in Panama's Omar Torrijos National Park, published in the Proceedings of the National Academy of Sciences, showing the startling disappearance of species there. Co-author Karen Lips began the study back before the disease chytridiomycosis, which is caused by a fungus called Batrachochytrium dendrobatidis and has devastated amphibian populations, reached that place and began to afflict its inhabitants.

The pre-decline surveys identified 63 species of amphibians within just a 1.5-square-mile (4-square-kilometer) area. After 2004, 25 of those species had disappeared from the site. As of 2008, none had reappeared. An additional nine species saw an 85 percent to 99 percent decline in their abundance [MSNBC].

The team also tested the DNA

they studied, and by doing so identified 11 new species that had escaped notice because of their striking physical resemblance to other species. However, five of the newly discovered amphibians are already extinct in the area, vanished before we ever know about them.

This brings the total loss of amphibian lineages to 41%. Naming a species that is already extinct was "pretty sobering", says Crawford [Nature].

And this discovery of the already dead isn't likely to end, he says:

“In amphibians, the amount of new species described every year keeps going up. We can’t even guess where it is going to stop.... But at the same time, we keep losing them. One third of amphibian species around the world are listed on the IUCN Red List” [Wired.com].

Meanwhile, other researchers are racing to stop the die-off. The main thrust of current research is to culture beneficial bacteria from healthy amphibians that could help keep the fungus at bay

. But scientists don't know whether a plan to inoculate wild species this way could work. Related Content: DISCOVER: 10 Studies That Revealed the Great Global Amphibian Die-Off—And Some Solutions

80beats: Lizards Can't Take the Heat, But Are They Really Going Extinct?

Discoblog: Frogs Pee Away Scientists’ Attempts To Study Them