Even frog eggs can flee from hungry predators. But how do they sense danger? 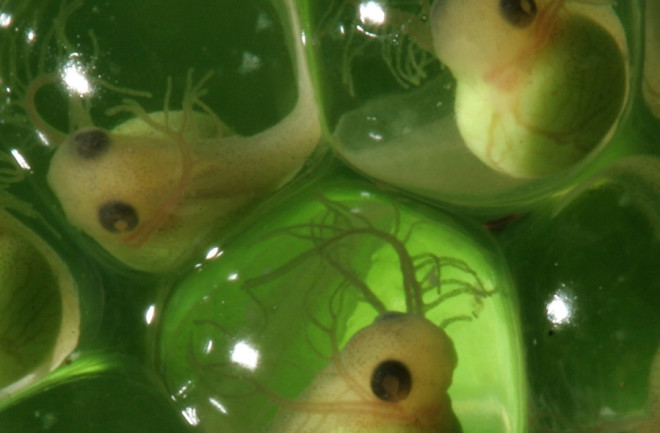 Karen Warkentin escapes from the sticky tropical heat into one of the few air-conditioned rooms in Gamboa, a quiet town on the banks of the Panama Canal. The biologist shares the first floor of a schoolhouse-turned-laboratory with other visiting scientists, students and an unwelcome orange tabby cat.

“My lab extends from the canoe to the wall of boxes full of egg cups,” Warkentin says.

In the middle of the room, part of the Smithsonian Tropical Research Institute, biology student Sonia Pérez Arias sits before a clear plastic box filled with colorful wires. A hollow plastic tube juts toward her from one end. Warkentin hovers behind her as she presses a black button, and with a faint whir, the tube begins to rotate like a spit over a fire. Pérez peers through the lens of a camera, magnifying the mouth of the plastic tube. Inside the slowly spinning tube, the big eyes of a red-eyed tree frog tadpole stare back.

Warkentin, of Boston University, built the “rollie widget,” as she calls it, not to make tadpoles dizzy, but to help answer one of biology’s most mystifying questions. Most animals begin life as eggs, yet little is known about the lives of embryos. How does the environment influence behavior during the most vulnerable stage of life?

Warkentin has found the eggs of the red-eyed tree frog (Agalychnis callidryas) to be the ideal study subject; they transform from sacs of dividing cells into fully developed tadpoles in just seven days. But it’s not an easy week for the embryos. Red-eyed tree frog eggs, which cling to vegetation overhanging ponds and swamps throughout Central America, often succumb to hungry predators, dehydration or drowning. But, as Warkentin was surprised to learn, the eggs aren’t completely defenseless: They can hatch early to escape these dangers. Still, it’s a dangerous trade-off: New threats wait in the water below.

The spinning tadpole Warkentin is watching is one of those escape artists; it hatched three days early. How did it weigh the risks of early emergence? She suspects the secret may lie in how the egg senses vibrations, and she built the rollie widget to find out. Warkentin watches the eyes of spinning tadpoles for signs that they can sense their world turning upside down. As it turns out, they can.

A Brush with Fate

Warkentin’s fascination with frog eggs began with a chance encounter in Costa Rica in the summer of 1991. Warkentin, then a Ph.D. student at the University of Texas at Austin, was trudging through the dense tropical vegetation of Corcovado National Park in search of a thesis. “I bumped into a clutch [of eggs], and tadpoles were all over me,” she recalls. Upon her touch, tadpoles exploded from the tiny gelatinous water balloons and squirmed across her skin. Warkentin had stumbled upon a clutch of red-eyed tree frog eggs — and her future life’s work.

At the time, most biologists believed that hatching timing was pre-programmed. “We thought it was like clockwork,” says Mike Ryan, a biologist with the University of Texas at Austin. But Warkentin wondered: Could the eggs hatch prematurely to escape danger?

If a brush with a human could make the eggs hatch, how would they react to an egg-eating snake?

In tropical rainforests, tree frogs must outwit many predators to reach adulthood. At the Costa Rica site, Warkentin found that an embryo has a 50 percent chance of meeting a snake or a wasp during the week it spends encapsulated. She figured it was unlikely that frog eggs would remain defenseless against such a common threat. For her thesis, Warkentin caged cat-eyed snakes (Leptodeira annulata) with clutches of 5-day-old frog eggs and found that the embryos could hatch to escape. Further experiments with eggs from Panama showed that embryos as young as 4 days old could accomplish the same feat.

The work launched an entire field of study into variation in hatching timing. Since Warkentin’s early discovery, other scientists have documented variation in hatching across the animal kingdom. Among amphibians, at least 38 species can manipulate hatching timing. Predators, pathogens, oxygen availability, even bad parenting can trigger early hatching. But preemies have higher rates of mortality than their full-term peers. Warkentin is finding that the decision to stay put or hatch early is often based on environmental cues — including vibrations.

To find out how eggs can tell the difference between vibrations produced by, say, a harmless rainstorm and those produced by predators, Warkentin teamed up with Greg McDaniel, a mechanical engineer at Boston University, in the early 2000s. The duo attached accelerometers to egg clutches and recorded the vibrations when the eggs were attacked by snakes or pounded by rainstorms. In the lab, they played those vibrations back to other clutches to find out what kinds of vibrations caused the eggs to hatch. They discovered that the frog eggs were picking up on the pattern of vibrations over time; rain and wind batter the egg clutches more or less continuously, but snakes have to take a break to chew.

But, Warkentin wondered, how did the embryos sense vibrations in the first place?

In the fall of 2013, she found some clues in, of all things, a space experiment. A colleague suggested she look at the work of Eberhard Horn, a neurobiologist at the Karlsruhe Institute of Technology in Germany, who described how the sensory systems of the African clawed frog fared in outer space. Specifically, he studied how spaceflight influenced the vestibulo-ocular reflex in tadpoles. The reflex is eye movement that keeps a tadpole’s gaze fixed on an object while its head moves, keeping its field of vision in focus. The mechanism stems from the vestibular system — structures in the inner ear that help vertebrates balance, sense movement and determine their position in space. These eye movements are the first clue that the vestibular system is beginning to function.

“This is kind of wild because you’ve got a whole new stream of information coming online” at that stage of development, says Warkentin. “It’s like getting all your news from the radio, and then suddenly you have a TV.”

In the Gamboa lab, to pinpoint at what age the visual reflex appears, Pérez, the student researcher, breaks open eggs from a single clutch oneat a time using forceps. She then loads each hatchling into the rollie widget, repeating the process every six hours for a week straight. (When the eggs are about 4 days old, she abandons the forceps — she can shake the embryos out instead.)

As the tadpoles spin, she snaps pictures and uses them to measure minute eye movements. “At 3 days old, nothing,” says Warkentin. “But at 4 days old, [the reflex] starts showing up.” Warkentin’s suspicions were right: The vestibular system comes online at the very same age when the eggs can hatch to escape peril.

Back in Boston, Warkentin’s team will look at the inner ear of each tadpole to confirm that the structures were fully developed when they hatched. But tonight, as the sun settles down over the canal, she showers the eggs with water from a spray bottle, and puts the tabby cat out one last time, protecting them from at least one potential predator for the night.

This article originally appeared in print as "Escape Hatch."