French bulldogs are one of several breeds with a genetic mutation that can increase their risk of a disease called obstructive airway syndrome. 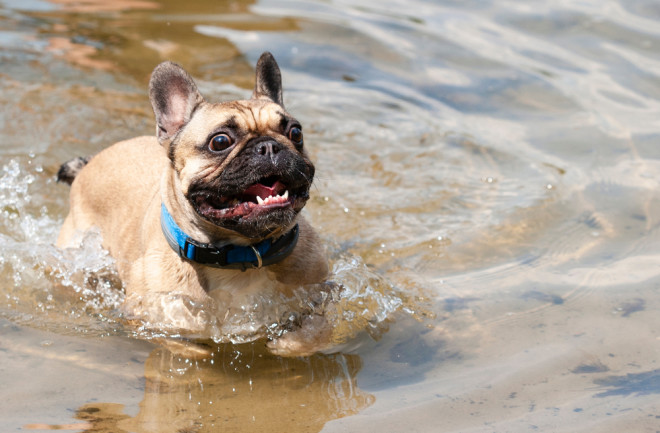 Who can resist a smooshed nose, wrinkly wide grin, and buggy eyes? Flat-faced dog breeds like bulldogs and pugs have become the popular “it” pets of the moment.

But the iconic looks that make Frenchies and the like so photogenic can also be harmful to their health and wellbeing. Veterinarians have long known that brachycephalic breeds – or dogs bred to have condensed snouts – are prone to breathing issues.

One of the most worrisome conditions is what’s called Brachycephalic Obstructive Airway Syndrome (BOAS). It's sometimes described as trying to breathe through a straw. And in severe cases, a dog can be so oxygen deprived that they pass out.

But mysteriously, similar breathing problems are also common among Norwich terriers, which have normal snouts. And that fact has long stumped vets, breeders and researchers.

Now, a new discovery could explain why many Norwich terriers and a few flat-faced breeds suffer from similar airway syndromes, despite their very different muzzles. A team of researchers has discovered a genetic mutation not tied to skull shape that seems to play a role in the breathing problems of Norwich terriers. Interestingly, they also found this same mutation in bulldogs and French bulldogs, and it may play a role in causing airway syndromes in these breeds, according to their study published in PLOS Genetics this week.

The work included researchers from the Roslin Institute at the University of Edinburgh's Royal (Dick) School of Veterinary Studies and Switzerland’s University of Bern. The researchers say their discovery challenges what we know about the causes of obstructive airway syndrome. It challenges the idea that smushed snouts are the only thing giving smushed-faced pups breathing problems.

“I think there’s ample proof to suggest that head shape, particularly having a shortened face, puts animals at risk of developing airway problems. But we wanted to explore whether other things are putting animals at risk,” said lead study author Jeffrey Schoenebeck, a geneticist at the Roslin Institute.

Norwich terriers aren't considered a brachycephalic, or flat-faced, dog. But many of these dogs with breathing difficulties still show the hallmark signs of brachycephalic obstructive airway syndrome. (Credit: msupercolor/Shutterstock)

The researchers say a genetic mutation called ADAMTS3, which is known to cause tissue swelling and fluid retention, is common in Norwich terriers, bulldogs, and French bulldogs. These breeds are especially prone to airway syndromes, although breathing issues are common in other snub-nosed canines as well.

Researchers uncovered the mutation after analyzing the DNA of more than 400 Norwich terriers, as vets performed airway examinations to confirm signs of the disease. They say around two-thirds of the Norwich terriers in the study showed mild to severe signs of the airway syndrome. The researchers then dug deeper into the genetic underpinnings of the breathing condition using genome-wide association – which scans genomes for relevant gene variants associated with conditions.

A particular genetic difference stood out for researchers. Many of the traits associated with the airway syndrome were tied to a single mutation of the ADAMTS3 gene. Humans can also carry the ADAMTS3 gene, and studies have linked it to a rare condition called Hennekam syndrome that also causes facial abnormalities, fluid retention and swelling in people.

Next, researchers wanted to find out if other dog breeds carried the mutation. They screened 1,300 dogs representing 114 breeds – including many flat-faced dogs diagnosed with BOAS. To their surprise, this genetic difference wasn’t as common as they thought. They only spotted the mutation in a few select breeds – the bulldog, French bulldog, Norwich terrier – and to a lesser extent, in some Staffordshire terriers.

“We also looked at pugs and other breeds at risk of developing BOAS, and in those dogs, we did not find the mutation that we isolated in Norwich terriers, even though they do get obstructive airway syndrome,” Schoenebeck said. “This tells us that we found something that has nothing to do with skull shape.”

Around 80 percent of the bulldogs tested had two copies of this DNA mutation. Among French bulldogs, three percent had two copies and another 17 percent carried one copy of the mutation. The researchers don't know if one copy of the mutation is enough to increase disease risk, or if it takes two copies. Schoenebeck said there's still a lot to learn about this genetic mutation and how it might contribute to a dog’s risk for obstructive airway syndrome – especially if it already has breathing difficulties from a pushed-in face.

“Norwich terriers and French bulldogs are genetically different, so we can’t automatically assume that this mutation is going to behave the same way in the genetic context of a French bulldog,” he said. “My gut tells me it’s probably bad news for a dog with a flat face to also have this other thing, but we don’t have the data in hand yet.”

Schoenebeck agrees it's peculiar that the Norwich terrier and bulldog breeds – which seem like total opposites in the dog world — have this genetic mutation in common.

“It does bug me,” he said. “I want to understand why it’s concentrated particularly in the bulldog, French bulldog and Norwich terrier. We just don’t know what it is just yet.”

For humans, it can be difficult understand what breathing is like for our furry companions with this airway syndrome. Dogs who develop it may have nostrils and windpipes that are narrow, and soft palates that are cramped into a too-small snout.

Tissue sacks in the throat also can invert from hard breathing, blocking airways even more. Dogs with this breathing condition also tend to have respiratory tissues that are more prone to swelling – which could be how the ADAMTS3 gene plays a role.

A dog’s ADAMTS3 status — and its role in tissue swelling — may be an important consideration if corrective airway surgery is recommended, Schoenebeck said. Complications are reported in around 25 percent of cases. Around five percent of dogs die from complications, the study noted.

"Largely these surgeries go really well, but there are cases where the dog really crashes and doesn’t recover well from its surgery … are there complications in its recovery because its tissue tends to swell? I hope [our study] opens up new lines of research.”

The work could lead to genetic tests to identify at-risk dogs and prevent affected pups from being bred.