Foxes use the Earth’s magnetic field as a targeting system 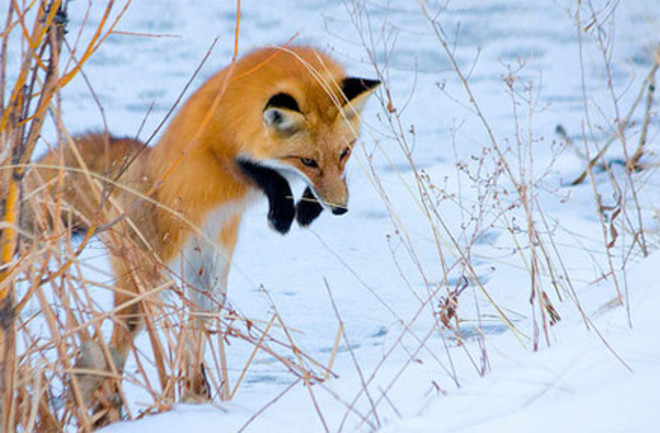 It’s winter on a British meadow, and a red fox is on the prowl. The snow-covered ground masks the sight of its prey but the fox can still hear the telltale rustle of a mouse. It creeps forward slowly, listening intently with erect ears. Once it pinpoints the mouse’s location, it leaps into the air to surprise its prey with a strike from above. This pounce, known as ‘mousing’, is a common sight but there’s more to it than meets the eye. Jaroslav Červený has found that when red foxes pounce, they mostly jump in a north-easterly direction. He thinks that they’re using the Earth’s magnetic field to hunt.

Červený spent over two years studying wild red foxes in the Czech Republic, with the help of a 23-strong team of wildlife biologists and experienced hunters. The team recorded almost 600 mousing jumps, performed by 84 foxes at a wide variety of locations and times.

They found that foxes strongly prefer to jump in a north-easterly direction, around 20 degrees off from magnetic north. This fixed heading was important for their success as hunters. They were more likely to make a kill if they jumped along their preferred axis, particularly if their prey was hidden by high cover or snow. If they pounced to the north-east, they killed on 73% of their attacks; if they jumped in the opposite direction, they success rate stayed at 60%. In all other directions, only 18% of their pounces were successful.

Could the foxes be taking their direction from the environment? Červený thinks not. He found that the animals leapt in the same direction regardless of the time of day, season of year, cloud cover, or wind direction. Červený thinks that the only remaining explanation is that foxes align their pounces to the Earth’s magnetic field.

John Philips, who studies magnetic senses at Virginia Tech, says “The challenge (and the fun) for anyone interested is to come up with [another] explanation that can explain the data. The strength of the authors’ conclusions are only as good as the inability of anyone else to come up with an alternative hypothesis.” Roswitha Wiltschko, one of the pioneers who deciphered the magnetic sense of birds, says, “The findings are really astonishing.” But she also thinks that they’re speculative. “This explanation… has plausibility only because there’s hardly any other mechanism that indicates directions.”

Philips explains it very well. He says, “Imagine you had a flashlight attached to your belt that was pointed down at the ground at a fixed angle of say 60 degrees. The beam of the flashlight would hit the ground at a fixed distance in front of you.  If you were trying to determine the exact location of a sound source coming from the ground in front, you could approach until the beam was exactly superimposed on the sound source. This would place you at a fixed distance from the source. As you attacked such targets again and again, you could perfect a highly stereotyped leap that precisely lands you accurately on the target.”

This would explain why the direction of the pounce matters most when the prey is hidden. If the fox can see its quarry, it can easily estimate distance using its eyes. But if its view is obscured by grass or snow, it needs other senses. If Červený is correct, then the red fox is unique in many ways. It would be the first animal known to use a magnetic sense to hunt, and the first to use magnetic fields to estimate distance rather than direction or position.

Many living things can sense magnetic fields. I wrote a feature for New Scientist last month which explores how birds – the best-studied magnetic detectors – do it. Other animals have a magnetic sense too, such as sharks and rays, turtles, ants, lobsters, beetles, bats and mole rats.

The list also includes cow and deer. In 2008, Červený’s group, led by Hynek Burda, found that herds of cow and deer also tend to align in a north-south line like living compass needles. Spying on the animals with Google Earth satellites, Burda’s team showed that they tend to face magnetic north regardless of wind strength, time of day, or the position of the sun. A year later, they found more evidence that these animals are influenced by a magnetic sense: their neat lines could be disrupted by high-voltage power lines, which produce strong magnetic fields. The nearer the herds get to the lines, the more chaotic their positions.

In all of these cases – be they cows of birds – it’s not entirely clear what the point of having a magnetic sense is. For example, it’s reasonable to think that magnetic compasses and maps could help migrating animals to find their way, especially when visibility is poor or landmarks aren’t obvious. That makes sense, but there’s little hard data to back it up. Červený’s study is one of the first to demonstrate a clear benefit – red foxes hunt more successfully if they jump in the right direction.

How might a fox’s magnetic sense work? No one knows and that’s the killer piece of evidence that Červený lacks. It’s not an easy question to answer either. Magnetic senses have been studied most thoroughly in birds, and after decades of research, scientists are only starting to uncover its inner workings. It is, perhaps, the most fiendish of all senses to study.

You can’t deliberately switch off the Earth’s magnetic field or tune it down. Other senses are linked to openings in the body like eyes, ears and mouths, but there’s no obvious place to look for a magnetic sense organ because magnetic fields are pervasive and pass through the body. And a magnetic sense typically works together with others such as vision or (in the case of the fox) hearing; isolating it is at best difficult and at worst irrelevant.

Nonetheless, we can make guesses about how a fox’s magnetic sense might work. Aside from sharks, animals sense magnetic fields using one of two basic methods. The first involves clustered crystals of magnetite, an iron mineral that line up according to magnetic fields. Depending on their direction, the crystals either repel or attract one another, creating tiny forces that could be picked up by proteins. The moving crystals could even open or close molecular gates on the surface of nerve cells. Either way, the crystals convert a magnetic field into a nervous signal.

The second method is used by birds and involves a molecule called cryptochrome, which is found in the retina. When light strikes cryptochrome, it shunts an electron over to a partner molecule called FAD. The result is a pair of ‘radicals’ – molecules with a solo electron. These unpaired electrons have a property called “spin” and they can either spin together, or in opposite directions. The two states can flip from one to another, and they lead to different chemical outcomes. This is where the Earth’s magnetic field comes in: it acts like a switch that influences the flips. In doing so, it can affect the outcome of the radical pair’s chemical reactions.

All of this happens in the eyes of common birds, such as robins or warblers. This is why you can deactivate a robin’s internal compass by blindfolding it. In fact, you could make it lose its bearings by blindfolding just its right eye, or covering it with a frosted goggle. Some scientists have suggested that robins and other birds can literally see magnetic fields, as a sort of heads-up display. The fields could appear as light or dark patches (or even colours) that lay on top of what the bird normally sees.

It’s tantalising to imagine foxes hunting with just such a display, and Červený mentions the possibility. However, that’s just speculation. As Wiltschko points out, we only know that the radical pairs contribute to the magnetic sense of birds – they’ve never been found in mammals. But at least now, we have an obvious place to look.

Ken Lohmann, who studies the magnetic senses of turtles and lobsters, thinks that Červený’s next move should be to disrupt the magnetic field around the fox to see if that interferes with their ability to catch mice. “If this is the case, then it would greatly strengthen the conclusions,” he says.  “But doing such a study will obviously be very challenging, given that it would involve altering the magnetic field over a large, outdoor area!”