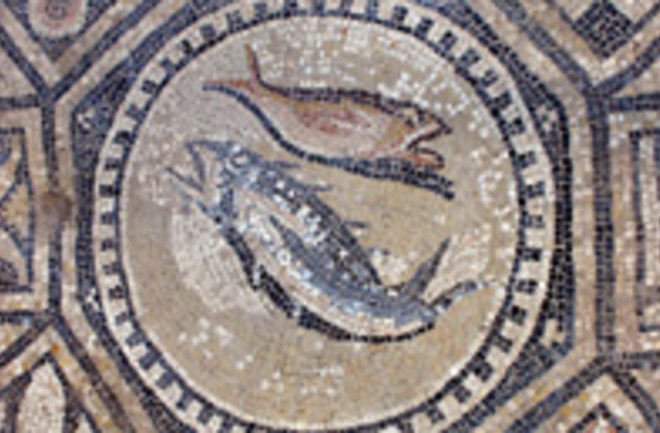 The mosaic floor from a third-century church displays early Christian iconography. It was found during an excavation for the expansion of an Israeli prison. | Courtesy of Israel Antiquities Authority

Conventional wisdom says early Christians scurried around an underground network of private homes and clandestine sites to avoid being thrown to the lions until Roman emperor Constantine legalized the religion in A.D. 313. But a 30-by-15-foot mosaic floor—all that remains of what may be one of the oldest churches ever found—suggests Christians were better tolerated than most people thought.

Mosaic fish symbols and references to a table donated for "the God Jesus Christ" firmly identify the building, located near Megiddo, Israel, as a place of Christian worship. Although the age of the structure hasn't been verified, epigrapher Leah Di Segni of the Hebrew University of Jerusalem says that the phrasing and the lettering style of the inscriptions support the idea that the church predates Roman approval. Moreover, the use of a fish motif rather than a cross, which became the dominant Christian symbol under Constantine, also suggests the building is older, according to Yotam Tepper, the Israeli Antiquities Authority archaeologist who led the excavation.

The most puzzling aspect of the find is an inscription identifying a Roman military man named Gaianos as the donor who paid for the mosaics—either a suicidal gesture of generosity in a time when the practice of Christianity carried the death penalty, or an indication that the church was built during a period of relative open-mindedness. If so, this tolerance was probably short-lived. Smashed wine jugs and shards of wall frescoes scattered over the floor led Tepper to speculate that the church was deliberately destroyed.

If the early Christians were right, it won't be the last time the church is demolished. The name "Megiddo" was later corrupted into "Armageddon"—the site, they believed, of the final showdown between good and evil just before the end of the world.