Newly-discovered fossils of the protomammal Lystrosaurus have mummified skin, the first such specimen ever found. 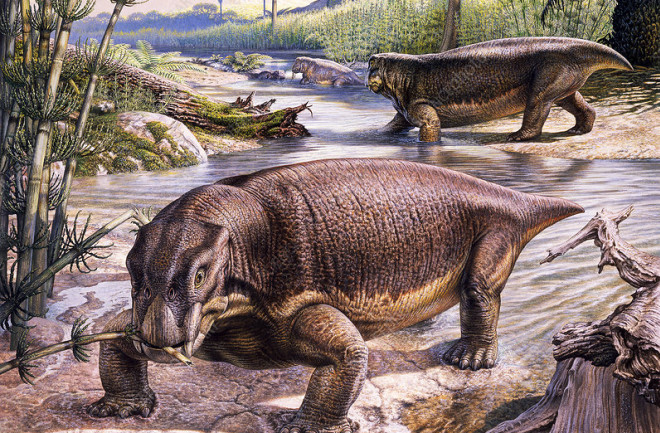 We know more about what dinosaurs looked like than many of our own fossil relatives. Even though excavations have turned up feathers, skin impressions and other clues about what the reptiles looked like, paleontologists have only found a handful of fossils that depict our protomammal cousins (technically called synapsids), as well as when classic mammal features like fur first evolved. A stunning cache of fossils found in South Africa has changed that, revealing what a pig-like herbivore named Lystrosaurus may have actually looked like.

Lystrosaurus has long been heralded as one of the fossil record’s great survivors. These rotund, squat herbivores were more closely related to mammals than reptiles. Sporting toothless beaks flanked by short tusks they used to cut food, their ability to hibernate likely allowed them to survive the worst mass extinction of all time. 252 million years ago, intense volcanic activity caused a catastrophic biodiversity crisis — about 75% of known land-dwelling species went extinct. But Lystrosaurus was one of the creatures that managed to survive in the aftermath. In an ironic twist, some Lystrosaurus that lived about a million years after this disaster perished in a harsh drought that inadvertently recorded what the animals looked like when alive.

The fossils are among 170 specimens found in South Africa’s Karoo Basin. These deposits date back to about 251 million years ago, the remnants of what was once a watering hole for local creatures that had dried up back in the earliest days of the Triassic. It’s there, University of Witwatersrand paleontologists Pia Viglietti and colleagues report in the journal Palaeogeography, Palaeoclimatology, Palaeoecology, that at least eight Lystrosaurus perished in a “spread-eagle” position. At least two of these show preserved skin, the first of their kind ever found.

Paleontologists often attribute such exceptional preservation to rapid burial. The longer a creature sits exposed, the more time scavengers (or the elements) have to break down their bodies and destroy soft tissues. But these Lystrosaurus tell a different story: Spines along their backs poke through the skin impressions, indicating that the protomammals became desiccated in the same way modern animals do during extremely harsh dry seasons. In other words, it wasn't until after these animals were dried out that they were buried and fossilized. Recent research has indicated that the early Triassic climate was unpredictable and often marked by dry spells, Viglietti notes, and during these times it was younger Lystrosaurus that often perished in the droughts.

The preserved skin indicates that Lystrosaurus was quite different from many animals today. “These animals did not have scaly bodies like reptiles,” Viglietti says, nor did Lystrosaurus have thick hides like hippos or rhinos do. Instead, Viglietti says, they had a soft, pustular texture made up of many little bumps. On the outside, synapsids were wrinkly, relatively soft-skinned creatures that did not closely resemble either reptiles or mammals.

Finding evidence of skin (or any other body covering) on a synapsid is a “holy grail discovery” says University of Southern California paleontologist Adam Huttenlocker, who was not involved in the new research. Still, he notes, it’s surprising that it took until now for such a discovery to be made. “Lystrosaurus represents some seventy to ninety percent of all vertebrate fossils found in the Early Triassic of the Karoo Basin,” Huttenlocker says, adding “why it took so long to find a mummified specimen really speaks to the exceptional conditions of this fossil.”

While more discoveries are still needed to flesh out the full story, the new Lystrosaurus finds add another point of reference for paleontologists curious about the origins of fur. Discoveries of earlier synapsids from places such as Russia indicate that early protomammals had smooth skin. The earliest direct evidence of fur in the fossil record doesn’t show up until tens of millions of years later, and even other clues, such as brain anatomy that suggests sensation through whiskers or vibrissae, also appear closer to the origins of mammals. Lystrosaurus didn’t show scales, but neither does it show fur — “just naked, wrinkly skin” Huttenlocker says.

Rather than being halfway between a reptile and a mammal, Lystrosaurus was a unique creature that had its own peculiar specializations. Among them, Huttenlocker notes, were tough coatings of keratin on their beaks and portions of their faces, an important protective adaptation for animals that dug burrows into the ground. “We are slowly filling in the gaps so that eventually we will have a more complete fossil record of skin,” Huttenlocker says, adding that Lystrosaurus can help scientists chart when protomammals went from unique oddballs to the fuzzier beasts that more closely resemble mammals today.