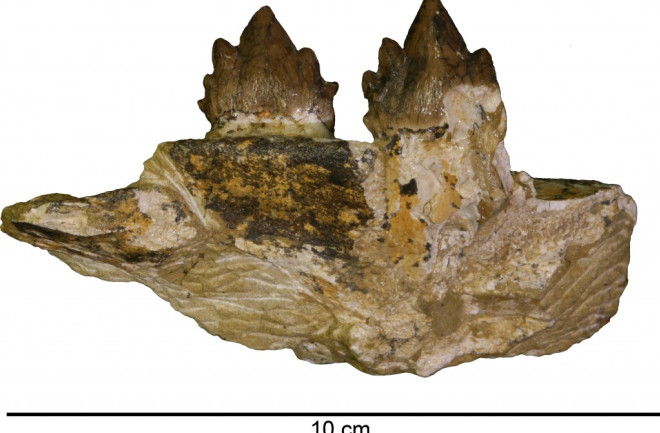 These are the teeth of an undescribed, new species of toothed baleen whale in the genus Morawanocetus, from Orange County, California. Image courtesy of Meredith Rivin, Dr. John D. Cooper Archaeological and Paleontological Center Paleontologists in California announced this week that fossils excavated in the early 2000s represent four new species of ancient whales. The toothed baleen whales apparently stuck around longer than scientists once thought, and they may hold clues about how and when whales evolved from toothy giants to the baleen-equipped beasts we see today. It all began with a road-widening project that was slowly making its way through a rock outcrop in California's Laguna Canyon in 2000. During such construction work the state requires paleontologists to be on site just in case they stumble upon something interesting. In this case they found something interesting indeed: hundreds of exciting fossilized sea creatures, 30 whale skulls among them. Four new species of whale were among the findings that paleontologist Meredith Rivin presented at the AAAS annual meeting on Sunday, as reported by ScienceNow. The whale bones date back 17 to 19 million years, upending scientists' previously held theory that these species were extinct five million years prior. Rivin said these fossils represent the most recent known whales that still had teeth, as opposed to the baleen we see in whales' mouths today. These newfound species are not a direct ancestor of modern whales, but they are part of the same suborder and were probably contemporaries of baleen whales' predecessors. The California find wasn't the the first time scientists happened upon fossilized whale skeletons during road construction, either. In a similarly fortuitous find along Chile's Pan-America highway in 2001, crews were excavating an ancient shallow Chilean tidal flat when they came across 45 whale skeletons. Since the highway crew was anxious to move forward with construction, the scientists digitized the fossils in place to create 3-D models of the skeletons before they were paved over. "This is one of those examples of a technological answer to a scientific question," said Nick Pyenson, one of the researchers with the Smithsonian National Museum of Natural History, in a AAAS press conference on Sunday. "This is, I think, in many ways, the next big thing for being able to document the natural world."