Fossils Reveal A New Species of Ancient Human in the Philippines 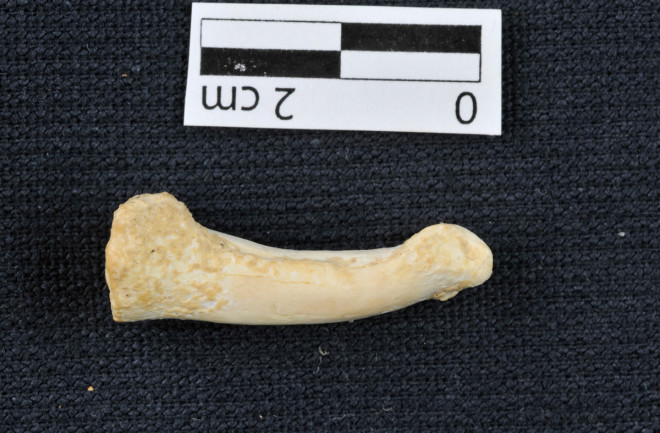 A toe from a member of the species Homo luzonensis recently discovered in the Philippines. (Credit: Callao Cave Archaeology Project) At the northern tip of the Philippine island of Luzon lays Callao Cave, an expansive, seven-chamber limestone warren. Researchers report today they have uncovered the bones of a now-extinct, previously unknown human species near the far end of the first chamber. The discovery adds to growing evidence that human evolution and dispersal out of Africa is much more complicated than scientists once thought and and reinforces the importance of Southeast Asia in the history of our species. The researchers say this discovery is only the beginning. "There is no reason why archaeological research in the Philippines couldn't discover several species of hominin," Philip Piper, an archaeologist at The Australian National University, who co-authored the new research, said in a statement. "It's probably just a matter of time."

In 2007, Piper and an international team of researchers discovered a foot bone in Callao Cave that "definitely" belonged to a member of the genus Homo, the group of species we belong to. But the archaeologists were unable to figure out which species of early human the bone actually came from. In the intervening years, the researchers continued to excavate the cave. Now they have unearthed 12 more bones — seven teeth, two foot bones, two hand bones and a thigh bone. The bones belonged to three individuals who lived at least 50,000 years ago, the researchers report today in the journal Nature. That date would mean these human relatives were alive at the same time as Neanderthals, Denisovans and our own species Homo sapiens, as well as another member of the human family tree known as H. floresiensis, short and small-brained ancient humans that lived in Indonesia. The bones bear an odd combination of primitive and modern human traits never seen before. The dissimilarities were enough for the researchers to declare that the bones belong to an entirely new human species. They named the new species Homo luzonensis, after the island on which they were discovered. The researchers did not make themselves available for comment for this piece.

Of particular interest to the researchers were H. luzonensis' teeth. When researchers compared the newly unearthed teeth of H. luzonensis to the teeth of other hominin species, they found peculiar discrepancies. H. luzonensis’ oddly small molars bear features — a simple crown surface and few cusps, pointed or elevated features of a tooth — that are similar to H. sapiens, the earliest of whom lived about 300,000 years ago. Yet, theshape of the newly discovered humans’ teeth resemble those of H. erectus, an early human species that likely dispersed out of Africa 1.5 to 2 million years ago. The researchers then used 3-D imaging to look at the area of the tooth where the enamel meets the hard bony layer underneath. This region of their premolars, the two teeth on either side of the jaw behind the canines, resemble the unique premolar teeth of H. floresiensis, but H. luzonensis’ molars, the teeth at the very back of the jaw, look like those of H. erectus or H. sapiens. These strange and surprising combinations of traits have researchers puzzling over how H. luzonensis is related evolutionarily to other hominins.

Upper teeth from the individual CCH6, the type specimen of the new species Homo luzonensis. (Credit: Callao Cave Archaeology Project) Complicating matters further is the shape of H. luzonensis’ toe bone. Although the hominin’s teeth resemble those of other Homo species, the curved shape of its toe bone looks like those of Australopiths, a group of extinct primates closely related to humans that lived some three million years ago. H. luzonensis’ bent toe and finger bones mean the species likely spent some of their time climbing in trees as well as walking on two feet, even though its Homo peers were ground-dwellers by this point. The novel combination of Homo-like teeth and Australopith hands and feet in H. luzonensis is just one element of the mystery that shrouds the new species. The conventional view of human dispersal across the globe is that H. erectus strode out of Africa some 1.5 to 2 million years ago. Other hominin species that were around at the time stayed on the continent. But the discovery of H. luzonensis on an island in that would have required a significant sea crossing to reach adds to the evidence that other early humans besides H. erectus traveled out of Africa. The findings mean,“our picture of hominin evolution in Asia during [this time period] just got even messier, more complicated and a whole lot more interesting,” wrote Matthew Tocheri, an anthropologist at Lakehead University in Ontario Canada, who was not involved in the research, in an article accompanying the research.