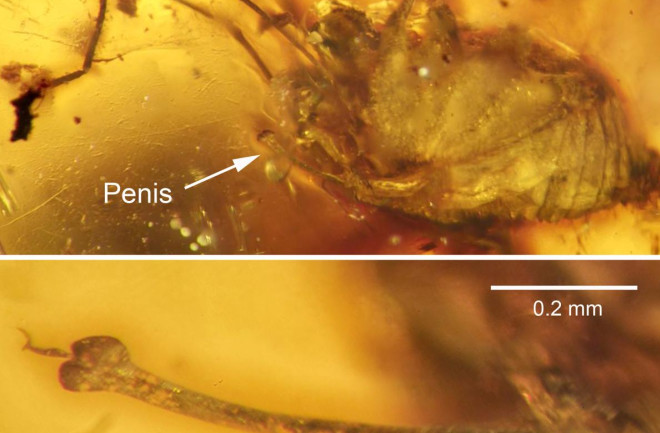 A photograph of the trapped harvestman (above) and a close-up of the penis (below). Credit: Jason Dunlop, Paul Selden, Gonzalo Giribet

An arachnid encased in a shard of amber found in Burma died in a rather compromising position.

A harvestman of the species Halitherses grimaldii was discovered sporting a massive erection, a position it had been stuck in for the past 99 million years. What’s more, the creature was so uniquely endowed that scientists declared the find a brand new family of arachnids — a move based mostly on the shape of its penis. They published their findings last week in the journal The Science of Nature.

The researchers used photography and 3-D imaging to study the preserved harvestman, focusing special attention on the penis, which extended to almost half the length of the unfortunate male’s body. The erect appendage possesses a distinctively heart-shaped head and a twisted tip, meant for delivering sperm to females via a hole near their mouth.

While other arachnids such as spiders and scorpions reproduce using a modified leg to transfer sperm to the female, the harvestman, also known as a daddy longlegs, uses a bona-fide penis to carry the act out. In addition to being a remarkably well-preserved specimen, this harvestman is the first to be discovered in such a, well, unique position.

Differentiating between species using penis morphology is not a new tactic for arachnid researchers. Different species of harvestmen often look very similar to each other, with the exception of their penises, making the sexual organs indispensable to researchers. The penis is usually carried within the body, and it’s typically invisible in preserved specimens.

Surprisingly, there was no female harvestman found nearby, indicating that the two were likely separated while in the throes of passion. While it’s not clear what cruel circumstances ripped this amorous fellow from his lover, he must have fallen into the resin soon afterward, locking his passion in place for the ages.

Alternatively, researchers have suggested that the harvestman may have gotten his erection while locked in a struggle with the sticky resin, raising his hemolymph, or blood, pressure enough that his penis hardened.

Harvestmen have crawled around on this planet for at least 400 million years, and are found today on every continent except Antarctica. Although there are over 6,500 species in existence today, this particular species likely died out or evolved millions of years ago.