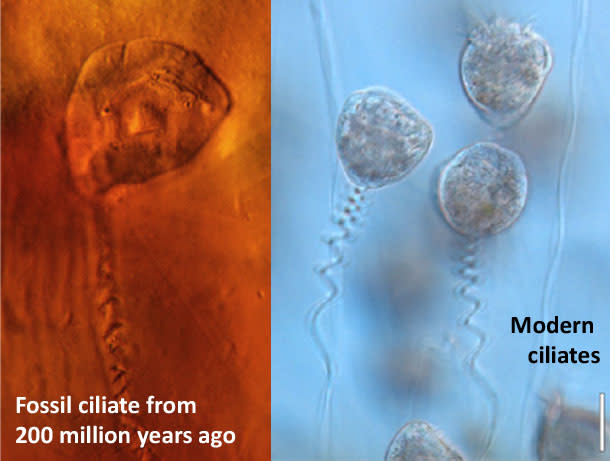 If you want to preserve your body so that scientists will dig it up millions of years from now, there are a few standard ways of doing it. You could get buried in sediment, so your bones and other hard tissues turn into stony fossils. You could get trapped in the sap of a tree, which will eventually entomb your body in gorgeous amber. Or if that’s a bit too flashy, try snuggling up in the cocoon of a leech. Leeches and earthworms secrete cocoons of mucus and lay their eggs inside. After a few days, the mucus hardens into a hard protective capsule that’s remarkably resistant to changes in temperature and chemical attacks. These cocoons fossilise very well, and palaeontologists have found many made by prehistoric leeches, dating right back to the Triassic period when dinosaurs first appeared. 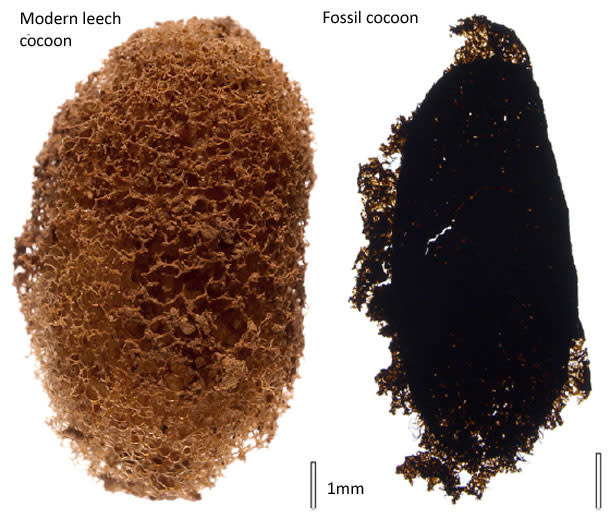 To Benjamin Bomfleur from the University of Kansas, these cocoons are a goldmine of information into the past. In one specimen, 200 million years old, he has found the remains of a microscopic soft-bodied creature that would normally be impossible to fossilise. In the leech’s cocoon, it found a way into the present. It’s cocoon’s resident is a ciliate, one of a group of microscopic single-celled creatures found in water all over the world. The ciliates have a proud scientific heritage. The first one was seen in 1674 by Anthony van Leeuwenhoek, the father of microbiology, who peered at it with his hand-made microscopes. It was then named in 1767 by Carl Linnaeus, the father of taxonomy, who called it

Vorticella looks like an inverted bell that attaches to surfaces with a long stalk. The stalk can coil up to rapidly reel in the bell, which otherwise sits in the open sifting particles from water. In rare circumstances, it can break off its stalk and swim around freely. Van Leeuwenhoek described it as an “bell animalcule” and Bomfleur’s paper unhelpfully calls it a “bell-animal”. That name invites confusion—ciliates are protozoans and belong to a completely separate kingdom of life to animals. We know that much, but also very little about how they evolved. Partly, that’s because ciliates are soft-bodied, with none of the hard components like bones and teeth that fossilise well. In this, they join the majority of life on this planet, whose frail bodies disappeared when they died, and left a huge gap in the fossil record. On the very rare occasions when scientists find ancient remains of such squishy life-forms, it’s because they fell into “conservation traps”—things like tree sap that rapidly entomb them before their cells decay. A leech’s cocoon is one such trap. Bomfleur was looking at several such cocoons that had been collected in 2005, from a coal seam beneath an Antarctic mountain. They’re similar to those produced by the modern medicinal leech, but around 200 million years older. And within the inner wall, Bomfleur found a microbe that “agrees in every observable detail with the living [ciliate] Vorticella.” It has the same bell-shaped body, the same coiled stalk, and the same big C-shaped nucleus. It’s hard to classify it exactly though, since many modern ciliates look like Vorticella. But it’s definitely a ciliate, and one of only a few that have been found in the fossil record. In the deep past, it anchored itself to the wall of a freshly deposited cocoon, and became trapped. Bomfleur thinks that leech cocoons could be a valuable source of other soft-bodied prehistoric life. Indeed, other specimens have contained other single-celled creatures and a Cretaceous worm. They’re not as beautiful as a hunk of amber, but they’re no less valuable. Reference: Bomfleur, Kerp, Taylor, Moestrup & Taylor. 2012. Triassic leech cocoon from Antarctica contains fossil bell animal. PNAS http://dx.doi.org/10.1073/pnas.1218879109