Fossilised embryos are the work of bacteria

Animal fossils are usually the remains of hard structures - bones and shells that have been petrified through enormous pressures acting over millions of years. But not all of them had such hard beginnings. Some Chinese fossils were once the embryos of animals that lived in the early Cambrian period, some 550 million years ago. Despite having the consistency and strength of jelly, the embryos have been exceptionally well preserved and the structure of their individual cells, and even the compartments within them, have been conserved in all their beautiful, minute detail. 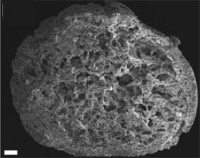 They are a boon to biologists. Ever since the work of Ernst Haeckel in the 19^th century, comparing the development of animal embryos has been an important part of evolutionary biology. Usually, scientists have to piece together the development of ancient animals by comparing their living descendants. But the preserved embryos give the field of embryology its very own fossil record, allowing scientists to peer back in time at the earliest days of some of the earliest living things. But how did these delicate structures survive the pressures of the ages?

Elizabeth Raff from Indiana University has a plausible answer. Her experiments suggest that fossil embryos are the work of colonies of ancient bacteria, which grew over the dead clumps of cells and eventually replaced their organic matter with minerals. They are mere casts of the original embryos.

Under a range of different conditions, Raff watched decaying sea urchin embryos (which are roughly similar to the fossil ones in both size and shape. Under normal conditions, she saw that dead embryonic cells destroy themselves within a matter of hours, through the actions of their own enzymes. To produce fossil embryos, this self-destruction is the first hurdle to clear and Raff found that it can be done quite simply by placing the embryos in oxygen-less environments.

When the fossilised embryos first died several million years ago, they must have sank into oxygen-deprived mud, which staved off the embryos' destruction long enough for bacteria living on their surface to take hold. Raff found that dead sea urchin embryos are rapidly colonised by bacteria that form three-dimensional communities called biofilms. They construct these communities using the embryo's own structures as scaffolding and the bacteria replicate the structures of the cells they consume, right down to the smallest feature.

Indeed, the fossil embryos still bear traces of these ancient bacteria. They have long, thread-like imprints that strongly resemble the shapes made by bacterial groups growing over sea urchin embryos in oxygen-less water. These biofilms stimulated the growth of minerals and Raff saw that needle-shaped crystals start forming around the bacteria within a week after the embryo's death.

The crystals are mainly made of aragonite, a type of calcium carbonate typically found in the shells of molluscs and hard enough to withstand the pressures of time. By decaying the embryos, the bacteria lower the pH of the surrounding water, which creates the right conditions for the growth of these crystals.

Raff's experiments with living embryos don't by any means give certain answers about the origins of the fossil embryos, but they do at least provide a plausible origin story. Indeed, the degree of degradation in her sea urchin embryos mirrors that seen in the fossils - in some, little but the outer layer was preserved but in others, even the inner workings were sealed in glorious detail (even though the multiple steps put a question mark over the accuracy of the final structures).

The study suggests that the beautiful fossil embryos are not in fact preserved versions of the original cells, but uncanny facsimiles created by bacteria. They may have been created through a two-step process, where each layer acted as a base for sculpting the next one - animal to bacterial, and bacterial to mineral.