Fossil tracks show a pterosaur coming in for a landing

Several million years ago, at a time when dinosaurs walked the earth, a flying reptile - a pterosaur - came in for a landing. As it approached, it used its powerful wings to slow itself down and hit the ground feet first. It took a short hopping step before landing a second time. On solid ground, it leant forward, put its arms down and walked away on all fours. 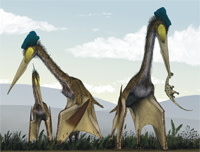 The landing made quite an impression on the underlying limestone mud and in the following millennia, the creature's tracks became fossilised. Now, they have been unearthed by Jean-Michel Mazin from the University of Lyon at a site near Crayssac in southwestern France.

The area is home to at least 30 sets of pterosaur tracks, which have earned it the nickname of Pterosaur Beach. Some of these tracks have confirmed that some pterosaurs walked on four legs while land-bound, in the manner of many modern bats. But one bizarre set stood out to Mazin - they simply didn't fit the typical walking gait of the French pterosaurs. The most plausible explanation is that they preserved a landing, and they're the first set of fossils that have done so. 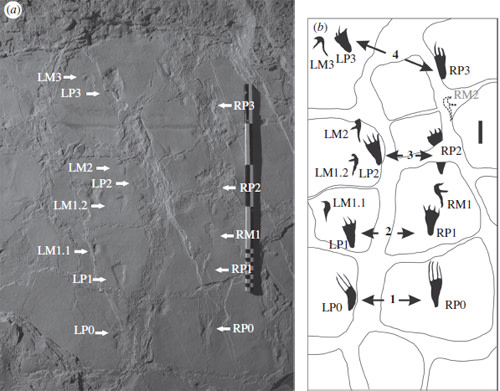 It's clear that the pair of prints labelled LP0 and RP0 were the first in the series. There were no other tracks for two metres behind or to the side of them, even though the ground is continuous. The tracks' maker must have been airborne before creating them. The tracks preserve four pairs of steps before a fault in the ground makes it impossible to work out where the animal went next.

The first set of footprints has no corresponding handprints, the heel portion isn't isn't deeper or longer than usual, and there aren't any piles of sediment around them. The pterosaur clearly landed feet-first, but it did so gently rather than braking heavily into the ground. Nonetheless, it wasn't a perfect landing. The slight impressions left by its claws and the short distance before the next set of footprints suggest that the animal stuttered slightly, hopping forward before coming in to land.

The claw impressions also rule out the possibility that the pterosaur was walking backwards before taking off (although tracks of a take-off would be equally unique and exciting). Indeed, later prints show that the animal placed its hand down and started walking away, turning left before the tracks were interrupted. The short distance between the hand- and footprints suggest that it held its trunk more vertically than the horizontal postures that pterosaurs are normally given.

The tracks suggest that pterosaurs can land in the style of most modern birds, by stalling their forward momentum with their wings, either by gliding and changing the angle of their wings, or by flapping to a halt. Both options suggest that the animals were sophisticated and powerful fliers. 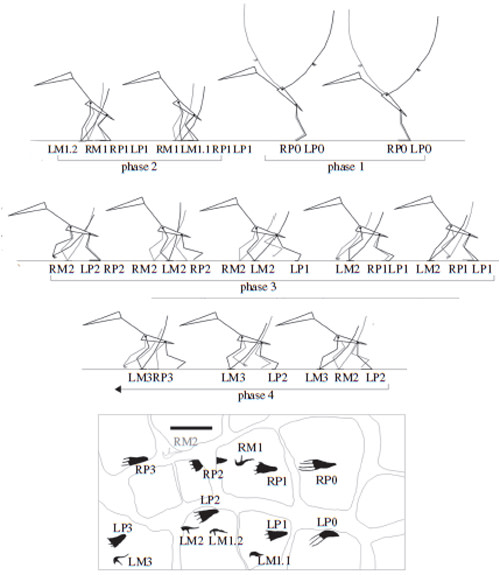 Reference: Proc Roy Soc B doi:10.1098/rspb.2009.1161 Can't find the paper? Be patient - most journals have a few hours' delay between the lifting of press embargoes and the publication of papers. For PNAS, this can be up to a week.