Fossil of the Day: The Marine Reptile that Really Sucked 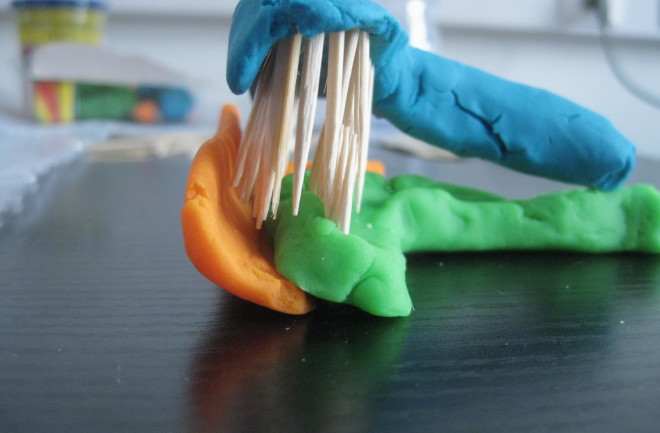 AAAAAAAGH! The ferocious-looking yet herbivorous Atopodenatus unicus...or at least a kiddie clay rendering of its peculiar jawbone, which researchers created to understand how something so crazy actually worked. Credit: Olivier Rieppel, The Field Museum. Hear the word "hammerhead" and you probably think of sharks in the family Sphyrnidae, or perhaps the locals that were less than welcoming to Riddick and other delicious humans in Pitch Black. You probably do not think of a Triassic marine reptile that bears an uncanny resemblance to an old Hoover upright.

A reconstruction beside the fossil of Atopodenatus unicus captures the marine reptile in all its freakish glory. Credit: Nick Fraser.Atopodenatus unicus, about 9 feet long, lived a quiet life some 242 million years ago, minding its own herbivorous business, just swimming along the ocean floor sucking up vegetation with a mouth that might also be mistaken for one of those old 3-hole punchers (kids, ask your grandparents). Found in a fossil-rich area of southern China's Yunnan Province, the Hooverbeast had peg-like teeth along its T-shaped mouth. To make things even crazier, it had an array of needle-like teeth deeper into its mouth, which may make you think of this:

Credit: Walt Disney Pictures. Don't get too excited. A. unicus actually used its more needle-ish set of teeth as a sieve. After scraping plants off ocean floor rocks with its front teeth (the mere thought of which makes my hominin teeth hurt), it sucked them deeper into its mouth, trapping the veggie matter similar to the way baleen whales nosh on krill and other critters.

More Than Just a Pretty Face

The shape of those peg-like teeth at the front of its mouth tell us that A. unicus was vegan — the oldest such marine reptile known. Being herbivorous is a rare thing for a marine reptile, and it's particularly interesting to find it in an early Middle Triassic species. Fans of mass extinction events (I know you're out there) will recall that the Great Dying, the biggest mass extinction our planet has experienced (so far), happened about 252 million years ago at the Permian-Triassic divide. The fact that, a mere 10 million years later, A. unicus had already evolved into its rather special form tells us that the life that survived the Permian Extinction recovered and diversified pretty quickly, relatively speaking. And though A. unicus has a unique form of hammerheadism (note: not actual scientific term), other animals have evolved similar front-ends for different purposes. The aforementioned hammerhead sharks, for example: with their eyes and sensory receptors at either end of their T-shaped heads, they have an expanded ability to detect and hunt prey. And let's not forget Diplocaulus (who could, really?), the funky chevron-headed amphibian of the Permian, which researchers believe got a hydrodynamic boost from skull shape.

Permian amphibian Diplocaulus (above) welcomes A. unicus to the WTH* club (*What the hammerhead, of course). Credit: Nobu Tamura/Wikimedia Commons.

Straightening Out the A. unicus Story

The first published description of A. unicus was in 2014. Due to the smooshed-up way (note: also not actual scientific term) the fossil was preserved, researchers couldn't make heads or tails or vacuum cleaner spare parts out of its jawbone. They thought it might have had a downward pointing snout or beak, like a flamingo. Then a couple additional specimens were found. Olivier Rieppel, curator of evolutionary biology at Chicago's Field Museum and a long-time collaborator with the Chinese researchers who first described A. unicus, happens to be an expert on figuring out smooshed-up specimens. "I worked with badly compressed fossils," says Rieppel, who uses children's play clay in his work. "It's natural to start rebuilding them in 3-D." A comparative anatomist, Rieppel looked at the jaw of A. unicus and was reminded of Henodus, another Triassic reptile (though of the placodont variety), first unearthed in Germany in the 1930s. (From a distance, placodonts might be mistaken for turtles, though you would be very mistaken indeed.) While Henodus is not related to A. unicus (aside from the whole reptile thing), it does seem that it had evolved a similar approach to eating. No hammerhead here, my friends, but Henodus did have an almost squared-off snout, visible in the lower left of the image below. It also had hard, tooth-like denticles around its mouth that could have scraped vegetation off surfaces, and grooves in its jawbone that may have served as a sieve, a lot like the set up of A. unicus, albeit considerably less reminiscent of a household appliance.

Henodus, the Triassic placodont that give new meaning to the phrase "square-jawed." Credit: Wikimedia Commons Thanks to Rieppel's previous work with smooshed-up excuse me, badly compressed fossils, Mr. Don't-Call-Me-Turtle Henodus, some modeling clay and a pack of toothpicks (subbing for those needle-like teeth), Rieppel and colleagues were able to determine what A. unicus actually looked like and how it ate. They reported the results today in Science Advances.

A final thought: while A. unicus has a face that will likely launch a thousand memes, the reptile's real significance may be what it tells us about the future of life on Earth, given that many researchers believe we are in the middle of another epic die-off. "There's a big interest right now in modeling both mass extinctions and the recovery that follows," says Rieppel, who previously described a large, rather nasty ichthyosaur that swam around what is now Nevada at about the same time A. unicus was scraping its teeth on rocks for food (ouch) on the other side of the world. The degree of specialization A. unicus had, as well as signs that the food chain could sustain big predators like the Nevada ichthyosaur, suggests that even after the Great Dying, species survived, evolved and expanded in diversity faster than we thought. Or, as a wise man once said: