Fossil May Reveal When Humanity’s Ape Ancestors Split from Monkeys 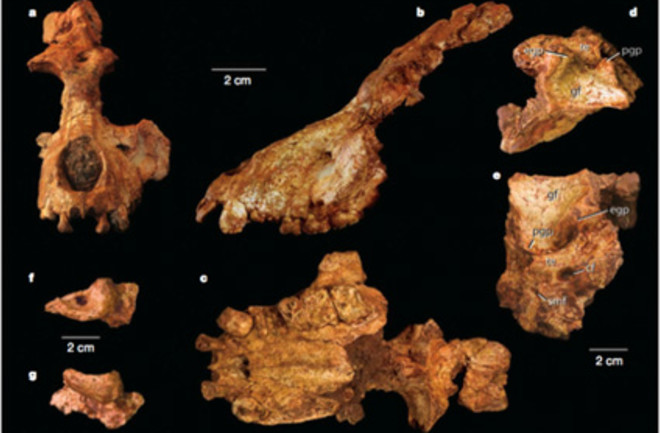 Perhaps you're one of those people who get their dander up when you hear creationists saying "I'm not descended from some monkey" not only for the obvious reason, but also because you can't help but blurt out, "No, you mean 'ape!' We're apes, not monkeys." Indeed, our superfamily, Hominoidea, split from the group labeled "old world monkeys" millions of years ago—but perhaps not as many million as we thought. In Nature this week, a team of scientists report on a 28-29 million year old fossil that appears to predate the split, meaning the separation would have happened more recently than other studies suggested. The partial skull of this new creature, which the team dubbed Saadanius hijazensis, turned up in Saudi Arabia in February 2009.

Saadanius sports a projecting snout, a relatively tall face with long, narrow nasal bones, broad cheek teeth and other traits resembling those of older primates previously unearthed at a geological formation on the edge of Egypt’s Sahara Desert. Researchers estimate that those creatures lived between 35 million and 30 million years ago.

But a few critical anatomical features, including a long, tube-shaped ear canal, distinguish Saadanius from its primate predecessors, the scientists say. And unlike Old World monkeys and hominoids that evolved after about 24 million years ago, Saadanius — which Zalmout’s group identifies as a male based on dental characteristics — lacked nasal sinuses and large canine teeth typical of later ape and monkey males [Science News].

In short: Before Saadanius, the researchers write, there wasn't much evidence between 30 and 23 million years ago to illustrate the divergence between our group and the old world monkeys (which led to today's baboons and macaques). And DNA studies had suggested

"The roots of apes, humans and monkeys go back a long way. We were interested to know when these ancient primates diverged because, in a way, that's when we got our start," said William Sanders, an author on the paper at the University of Michigan's Museum of Palaeontology. "Knowing the date is important because you can then look at what the conditions were like at that time and place and get some idea of what was driving their evolution," he added [The Guardian].

But while it's tempting to see ourselves in primate

fossils, there's no way to know whether Saadanius was actually an ancestor of humanity. It may have predated that split between old world monkeys and apes, but it could have been a branch on the evolutionary tree that died out. Related Content: The Loom: Meet the Monkey Cousins

DISCOVER: Monkeys Show They Know What They Know

80beats: The Growth of a Baby's Brain Looks Like Human Evolution in Slow-Motion