Fossil Ichthyosaur Blubber Is Evidence They Were Warm-Blooded 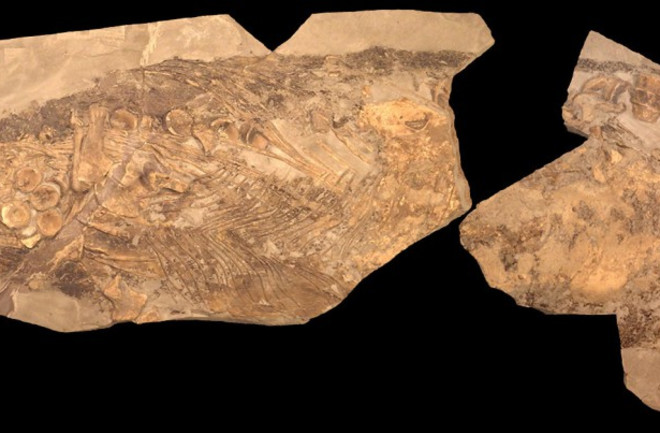 For the first time, researchers have identified blubber, and other soft tissue, preserved in an Early Jurassic ichthyosaur. The new interpretation of the 180-million-year-old fossil suggests that the extinct marine reptiles were warm-blooded.

Ichthyosaurs swam the Mesozoic Era seas and were roughly contemporary with dinosaurs. They are often compared with modern toothed whales, particularly porpoises (though at least one ichthyosaur species attained blue whale-like size). Many paleontologists have theorized that the animals, like modern whales, were warm-blooded, though evidence supporting the idea has been largely elusive.

Today, however, researchers describe the results of a new and more refined analysis of a specimen of the ichthyosaur species Stenopterygius, preserved with some of its skin, including pigmentation, blubber and possibly liver tissue (and, bonus, stomach contents).

The researchers used ultraviolet light, specialized X-ray imaging and other techniques to determine the composition of the fossil. They identified remnants of smooth skin lacking scales and similar to that of a porpoise. The skin’s upper and lower layers were preserved, along with an underlying layer of fat, or blubber.

Identifying the blubber, confirmed with additional molecular analysis, provides the strongest evidence yet that ichthyosaurs were warm-blooded. Blubber insulates, stores energy as fat and provides buoyancy. Today, the only animals with the layer of protective fat are warm-blooded amniotes (mammals, reptiles and birds) that spend all or much of their lives in cold water (such as whales, seals, polar bears, leatherback sea turtles and penguins).

Finding blubber on an ichthyosaur is an example of convergent evolution, when unrelated animals occupying similar ecological niches evolve the same trait.

The preserved pigmentation on the skin suggests that Stenopterygius had countershading (light belly, dark back), a common camouflage strategy for modern marine predators. In addition to making the animal more difficult to see, countershading can help with thermoregulation.