Chasmaporthetes, sometimes called the “running hyena,” has been found all over the world, but never before in the Arctic. 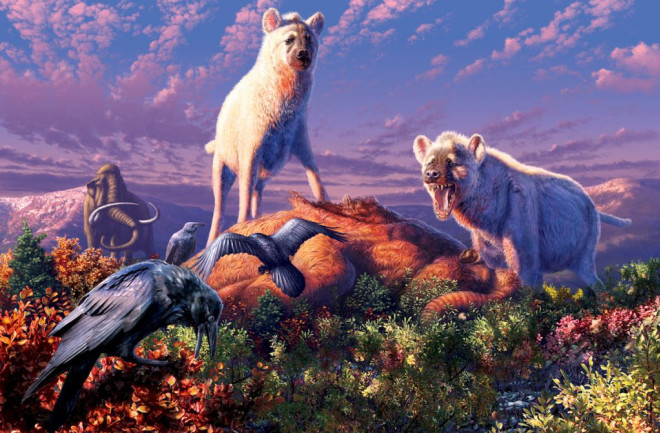 You might associate hyenas with Africa’s sprawling savannas, but the animals were once right at home above the Arctic Circle.

Modern hyenas generally stick to Africa. (A decreasing number of one species, the striped hyena, can be found on the edges of southwestern Asia.) However, back in the day, various now-extinct species roamed much of the world. For example, fossils from the ancient hyena genus Chasmaporthetes have been found from Morocco to Mongolia to Mexico.

The Hyena That Ran With It

Chasmaporthetes, sometimes called the “running hyena,” lacked the hunched posture of modern hyenas. It more likely resembled a small, lean wolf. The animal would have been efficient at chasing game, though its bone-crushing jaws also would have come in handy for munching and crunching carrion.

This particular genus of hyena started running around more than 5 million years ago. It disappeared from the fossil record about 750,000 years ago, possibly outcompeted by canids expanding into new territory.

You might be wondering how and when Chasmaporthetes, which likely evolved in Eurasia, made it to the New World — the only hyena known to do so. Researchers have long assumed it made the trip via Beringia, the landmass that once stretched from Siberia to what’s now Alaska.

Beringia’s biggest claim to fame dates back to the Last Glacial Maximum, about 18,000 years ago, the last time sea levels were low enough to expose the area. Back then, bands of humans headed east from Siberia, either along Beringia’s resource-rich Pacific coast or following herds of large game inland, eventually ending up in the New World.

But, like many other expanses of land around the world, Beringia was high and dry more than once.

In the last 20-plus million years, Beringia has come and gone multiple times due to changing sea levels. Many land animals, including various species of horse and bear, have crossed the region without getting their paws wet.

(Eurasian-American species migration also occurred well before that, during the millions of years the landmasses were smooshed together in a supercontinent, no land bridge needed.)

The thing about Beringia: Researchers know it’s the only plausible route between Eurasia and the Americas for terrestrial animals, but it’s tough to find the smoking gun that establishes a species passed through, and when it did so.

It’s not for lack of fossils. Numerous sites in northern Canada and Alaska have yielded fantastic finds, including an Arctic tyrannosaur. But some of the most fossilferous sites, in Canada’s Yukon Territory, come with a built-in headache.

Old Crow Basin, for example, is one of four large interior lowland areas along Beringia’s eastern edge. Over millions of years, sediment accumulated in Old Crow and the other basins, preserving a rich record of flora and fauna.

During the Last Ice Age, however, expanding ice sheets changed the flow of regional rivers, and they carved new routes across the basins. The force of the water cut into all those layers of fossil-rich rock, exposing a lost world of plants and animals ready for modern paleontologists to find.

Tens of thousands of fossils have been found in the Old Crow region in the last century or so, representing more than 80 species. Alas, nearly all of them turned up piecemeal, jumbled together, washed downstream from their original resting place.

Context is everything in paleontology: Without knowing which layer of rock a fossil came from, it’s tough to date it. Other details get lost as well. A full skeleton preserved in situ can provide a wealth of info about the animal’s anatomy, lifestyle, ecological niche and even cause of death. That same animal’s remains, disarticulated into a rib bone here and a humerus there, may be impossible to classify at all.

The teeth turned up in Yukon Territory’s Old Crow River region, among tens of thousands of fossils recovered there in the last century. (Credit: Duane Froese/University of Alberta)

Sink Your Teeth Into This

Which brings us to a couple of teeth found in Old Crow Basin more than 40 years ago. One tooth turned up in 1973, the other four years later.

Based on the general ages of local rock layers that have not yet eroded, researchers place the age of the teeth between 12,000 and 1.4 million years. It’s likely the teeth are at least 850,000 years old, and possibly closer to 1.4 million years, but that’s about as specific as the team will get.

Like the vast majority of fossils pulled from the earth, the teeth sat unstudied in a museum for decades. They attracted some interest, because they appeared to belong to carnivores, a relatively rare find in Old Crow, but only recently did they get a full-on analysis.

The results are pretty exciting.

One of the “running hyena” fossil teeth, collected in 1977 from Canada’s Yukon Territory. (Credit: Grant Zazula/Government of Yukon)

The authors of a new study devoted to the teeth classify them as belonging to the genus Chasmaporthetes, providing that “smoking gun” fossil: Hyenas once roamed the Canadian Arctic, traveling from Eurasia into the Americas.

The teeth move the range of Chasmaporthetes northward in the Americas by about 2,500 miles. Prior to the Old Crow discovery, the northernmost American sites for the animal were in northern Mexico and Florida. Meanwhile, the Old World Chasmaporthetes site nearest to the Arctic find is 4,000 miles away, in Mongolia.

Finding just two isolated teeth makes it impossible to be sure of the species, but they’re most similar to the chompers of C. ossifragus, also known as the American hyena. The authors note, however, that the teeth may belong to a previously unknown species. Finding more pieces of it as they sift through the fossil booty of Old Crow may result in the classification of an entirely new species. The Beringian hyena has a nice ring to it.