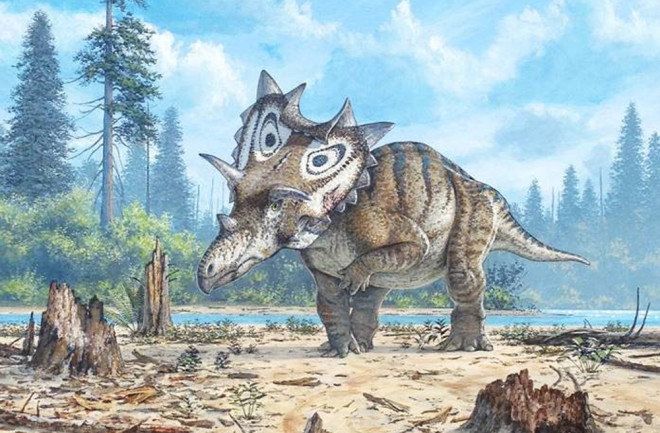 Limpin' ain't easy: Artist's rendering of the dinosaur formerly known as Judith spotlights a left forelimb that was likely useless for walking due to arthritis and infection. Credit: Mike Skrepnick When it comes to dinosaur bling, nothing beat the ceratopsians, with their fantastic variations on horns and frills and hooks and spikes growing out of bony neck shields. Today researchers added two new fossil fashionistas to this bunch of best-accessorized dead things, one of which raises an intriguing mystery. One new addition is out of Utah and goes by the name of Machairoceratops cronusi. Roughly 77 million years old and known from a single partial skull, this beast was probably about as long as a stretch limo and weighed up to 2 tons. But bodies are rarely the big story in ceratopsians, all of which had, more or less, a sturdy, four-on-the-floor build not unlike a rhino. With ceratopsians, it's all about the head.Machairoceratops — let's call it Macho — had two large spikes rising off the back of its neck shield and curving up and over toward its snout. What's odd about these spikes is that each had a channel running the length, base to tip, and researchers have no idea what it was for. Those channels are autapomorphic —there's your Dead Things Word of the Day, folks — which means they're unique to this species. Hazard a guess about what the channels are for after checking out Macho's specs, published today in the open-access journal PLOS ONE. Weird spike channels aside, Macho is important because it was found in what was the southern part of Laramidia, the Late Cretaceous continent that eventually became the western U.S. Most of the horned dinosaurs closely related to it were hanging around northern Laramidia, so finding Macho here expands our understanding of their range as well as their diversity.

Meanwhile, in Montana, Judith has gone legit. Specifically, the skull and partial skeleton of a fossil nicknamed after the Judith River formation, where they were found a decade ago, were formally described today, also in PLOS ONE. Unlike other ceratopsians, horns above this dinosaur's eyes sprout sideways, and bony hooks along the edge of its frill go every which way.

Skull reconstruction of Spiclypeus shipporum from four angles. Credit: Scott Rufolo, Canadian Museum of Nature Now officially known as Spiclypeus shipporum, the dinosaur was at least 10 years old when it died about 76 million years ago. But those were not highway miles, my friends. Poor Spicly had signs of infection and arthritis in its front left limb; it likely had to walk on three legs and lived in pain.

Cranial reconstruction of new dinosaur Machairoceratops cronusi. Credit: Lund et al. Back in the day, some paleontologists theorized that ceratopsians' elaborate headdresses were used as weapons (the pointy bits) or in defense (the large bony parts). We now know, however, that these diverse skull ornamentations were just that: ornamentations, which helped recognize members of their own species.