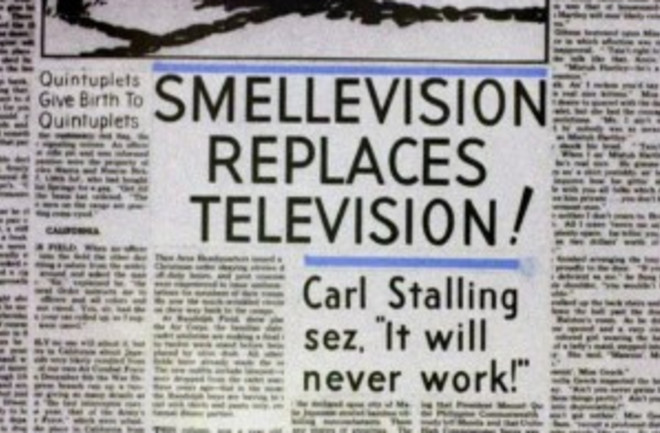 Elmer Fudd might have been the only one not surprised that scientists can make mice smell a nice sharp cheddar by shining light into their noses. Actually, he might be disappointed after having to wait an extra 10 years: In “The Old Grey Hare”, Fudd learned of “smellevision” from a newspaper in the year 2000. But here in 2010, Venkatesh Murthy at Harvard led a team that replaced some of the chemical smell sensors in transgenic mouses noses with light receptors. So when a beam of light hits the mouse’s nose, the mouse will “smell” the light. Why go to all the trouble? Light creates simplicity. Murthy wants to better understand how brains react to smell, and he wants to see precisely which parts of the brain “light up”, or become active, when the mouse smells something. But the actual smells are too diffuse, and too complex, to be administered efficiently in a controlled setting. Light can be controlled with much more precision. Murthy can fire a pulsing beam right up the mousey nose, stimulating the receptors so that mouse’s brain responds to the "smell" (hopefully light smells like cheese. Or peanut butter). Creating mice with light-stimulated neurons is part of a burgeoning field called optogenetics (PDF): The study of animals modified so that specific groups of neurons will respond to light. Optogenetics first broke into the news when Yale researcher Gero Miesenböck used it in 2005 to make fruit flies that flapped their wings when a UV light shone on them. Jay Leno even did a sketch on it (Though I couldn't find it on YouTube). For Murthy, the key innovation came a year later, when Karl Diesseroth at Stanford discovered he could adapt a protein called channelrhodopsin-2 from an alga (rhodopsins are also the first response to light in our own iris), could be bred into rats and mice. The rhodopsins responded to the signal faster, allowing the scientists to mimic brain functions when they stimulated the neurons. No doubt scientists will continue improving optogenetics to refine how they can be used to study the brain ---- they hope to run fiber optics deep into the mouse brain and watch some of the more hidden functions ---- but probably they won’t be adapting the technology for smellevision any time soon. Which is probably for the best. McDonald’s would almost certainly be the first to try it during the Super Bowl, and I’m not sure I could handle that.