For Guilt-Free Fur, Wear a Coat Made From an Invasive Water Rat 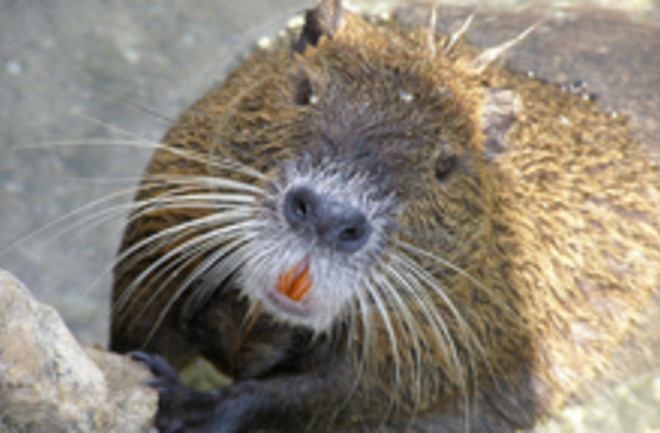 At a time when wearing fur is generally considered a fashion faux pas, designers like Oscar de le Renta and Billy Reid are taking a big fashion risk. They are selling pelts from an unusual source: the nutria.

Ever heard of the nutria? It’s a nocturnal, semi-aquatic rodent that weighs around 12 pounds. It has the body of a beaver, the tail of a rat, the feet of a duck, and it wears its nipples on the sides of its body rather than on its belly. It is also destroying Louisiana’s wetlands.

In the 1930s, Louisiana fur farms imported these animals from Argentina for their supple pelts. Unfortunately, some nutria got loose and made Louisiana’s marshes their new home. As the demand for nutria fur diminished in the 1980s, these animals went from posh fashion statement to ecological pest.

Today, nutria have destroyed tens of thousands of acres of wetlands in Louisiana by feeding on marsh vegetation. Nutria graze on the roots of plants, making it difficult for this vegetation to regenerate. When a marsh’s natural flora is destroyed, the soil underneath gets swept away by the tide, and the marsh becomes open water.

Over the years, the government of Louisiana has gone to great lengths to curb the nutria problem. It has even invented a number of nutria-based recipes, encouraging citizens to make nutria a delicious part of their daily diets.

Members of Louisiana’s Coastwide Nutria Control Program already kill thousands of nutria a year, letting their pelts go to waste. But now, designers and activists alike are attempting to hype the nutria as an eco-friendly source of fur. One group, known as Righteous Fur, is promoting the use of nutria in fashion and even held a nutria fur design competition on January 8th.

So if you love the feel of fur on your skin, but don’t want to be burdened with guilt, consider the nutria. That is, if you don’t mind wearing a water rat.