For Chimps, a Rear End Is Worth a Thousand Faces 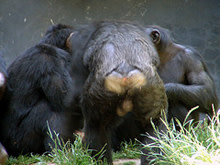 Chances are, you’ve seen more than one guy on the street turn to stare at a woman’s rear end. Now it looks like men aren’t the only ones: A new study found that chimps can recognize other chimps simply by looking at photos of their butts. Well-known Emory University primatologist Frans de Waal discovered that chimpanzees could match up pictures of other chimps’ rear ends and genitals to pictures of the corresponding faces—though it only worked if the observer knew the photo subject personally. "They were not only seeing the photographs as representations of chimps they knew," says de Waal, "but linked the face and behind by drawing upon a mental representation of the whole body of those chimps." In a separate experiment, de Waal tested how well chimps can judge the sex of another chimp based on just a photo of the mystery chimp’s face. Again, the test chimps were successful only when the photos were of familiar faces. De Waal says humans judge gender in a similar way. We can decide if faces are masculine or feminine based on the shape of the face or the amount of hair the person has. Obviously, if we know the person in question, we can tell if the face belongs to a guy or girl much more quickly. And in case you're looking for more on the topic of chimp derrieres, be sure to check out this chimp!

Planet EarthWild Chickens Rule the Streets in Some Beach Towns. Here's Why One Scientist Is Studying Them