For Australian Bowerbirds, Smart Is Sexy 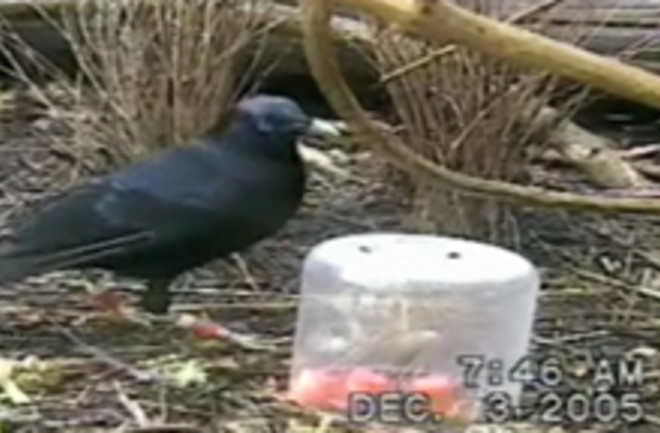 In the first experiment linking cognitive ability to reproductive success, researchers found that the male bowerbirds with the best problem-solving capabilities also mated the most often, according to a study published in the journal Animal Behaviour. The Australian bowerbird is known for its elaborate courtship behavior. During

breeding season, males build a special platform, or bower, on the forest floor to lure females, and they decorate it with rare objects such as blue feathers and shiny bits of glass. They accompany this with varied vocalizations, hopping, and tail-bobbing [ScienceNOW Daily News]. To evaluate which males had the best problem-solving abilities, scientists placed a red object in the birds' bowers--a color the birds disdain. In one experiment, three red objects were placed in the bower and covered by clear plastic that the bird had to take off in order to remove the noxious items. In the next, the red object was securely nailed to the nest, so the only way to make it less visible was to cover it with leaves and twigs.

The male birds that were quickest to remove or cover the object had the highest problem-solving ability. In the first test, for example, some birds took only 20 seconds to remove the object, yet a few couldn't do it at all. Mating success varies widely from bird to bird, with number of copulations per individual during the breeding season ranging from zero to several dozen. Roughly speaking, the most competent birds averaged about twice as many copulations as the slowest problem-solvers, the researchers report

. Scientists postulate that the female birds may view the males' cognitive ability as an indicator of genetic fitness, especially because other research has shown that birds with poor cognitive skills also are more likely to have parasites and a weaker immune system. Related Content: 80beats: Aesop Was Right! Birds Use Rocks to Raise Water Level 80beats: Not So Bird-Brained After All: Rooks Make and Use Tools 80beats: Mockingbird to Annoying Human: “Hey, I Know You”